And their south border was from the shore of the salt sea, from the bay that looketh southward Joshua 15:2

Saturday. MaryLou organized a day trip to Progreso, a port city 30kms north of us. So after breakfast we were ready to go. I heard Pepe the neighbour outside and went out to ask him about taking the bus. He wasn’t keen on it. He offered to take us to the highway and we could either wait for a combi or bus from there or just call an Uber. When we got to the highway we decided to just get an Uber.

The Uber taxi dropped us off at the town square in Progreso. We started walking towards the beach. It was VERY ‘touristy’ — with small shops along both sides of the road and hucksters beckoning and inviting us in at each one. And there were LOTS of tour operators selling ‘packages’ that would take us to any or all of the places that were on MaryLou’s list — and most offered even more stops than we were interested in. After enquiring at a couple of them we settled on a ‘private’ car with a driver to take us to see the flamingos, the salt flats, and the mayan ruins at Xcambo. It would be about a 3-hour excursion.

Our ‘salesman’ took us into his office where another guy ‘sold’ us the tickets. He then summoned a car and driver. While we waited for the car to arrive I scouted out the large indoor market we were in. There were many little food stalls and most looked to be quite busy. I bought a pork taco and a coke and finished it just as the car and driver appeared.

Our driver spoke VERY limited English. But with the help of our translator apps on our phones we managed to get a few questions answered. Our first stop was to see the flamingos. We drove along a narrow bumpy road that led into a huge marshland. We found some flamingos, but they were WAY out there — too far for my phone camera to get a good photo. But MaryLou had her SLR camera with a telephoto lens and was able to zoom in quite close. After a few minutes we got back into the car and drove back to the main coastal highway. As we drove east we saw many large and beautiful homes along the coast. Our driver said there were many Americans and Canadians who owned properties here. 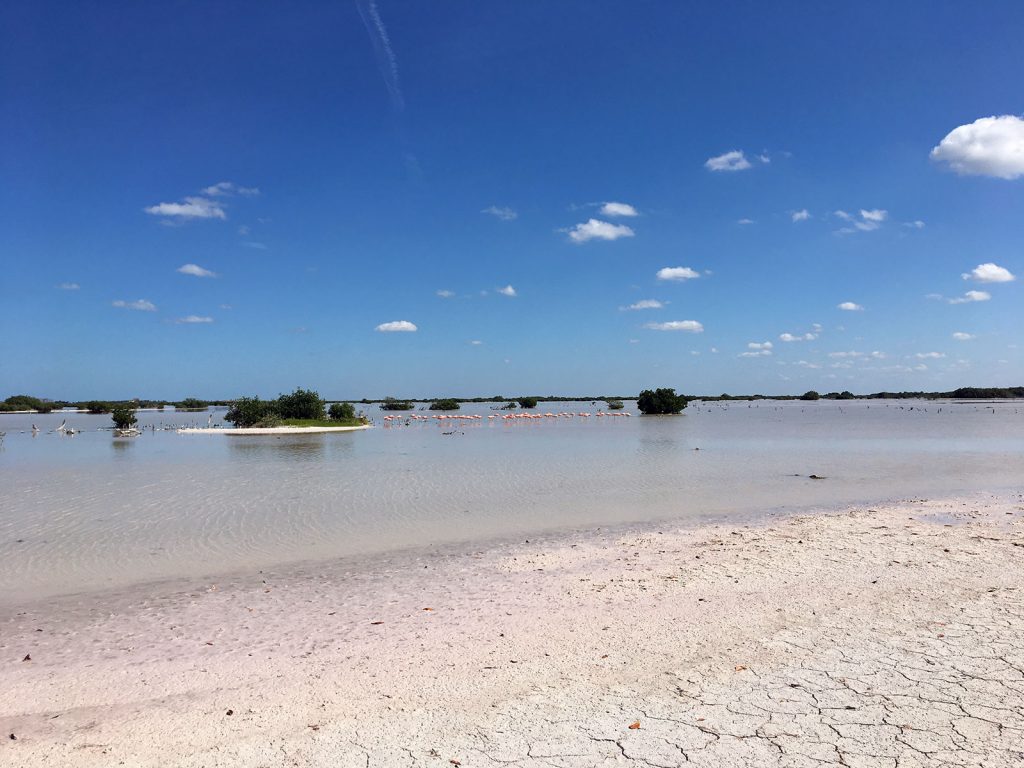 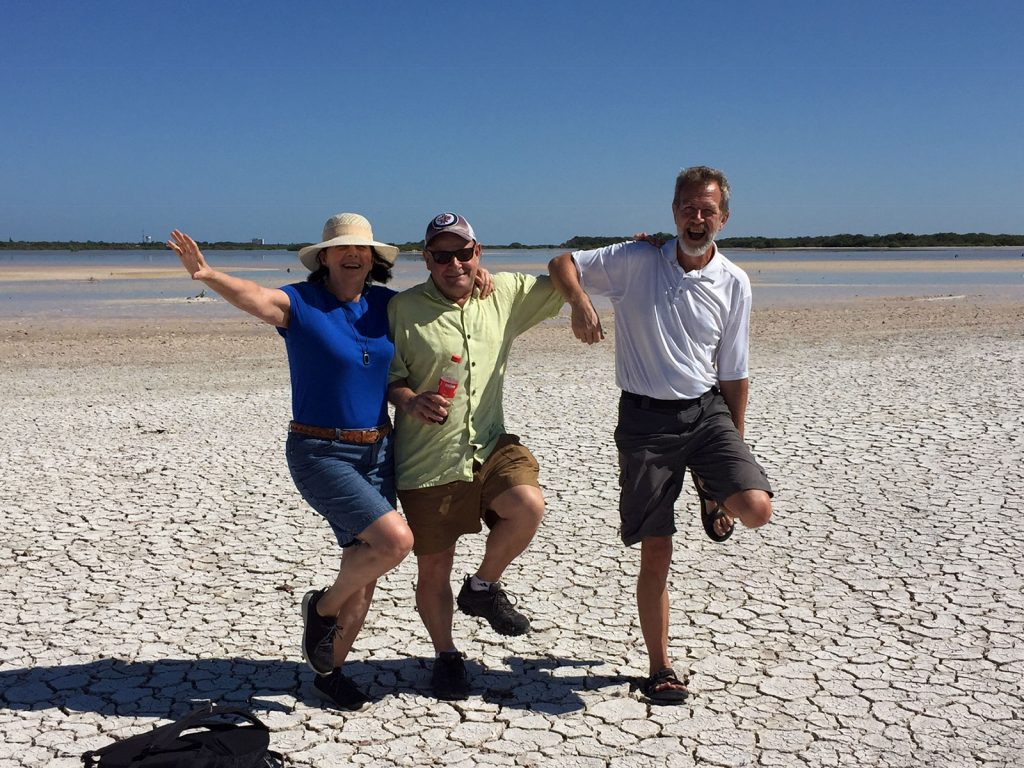 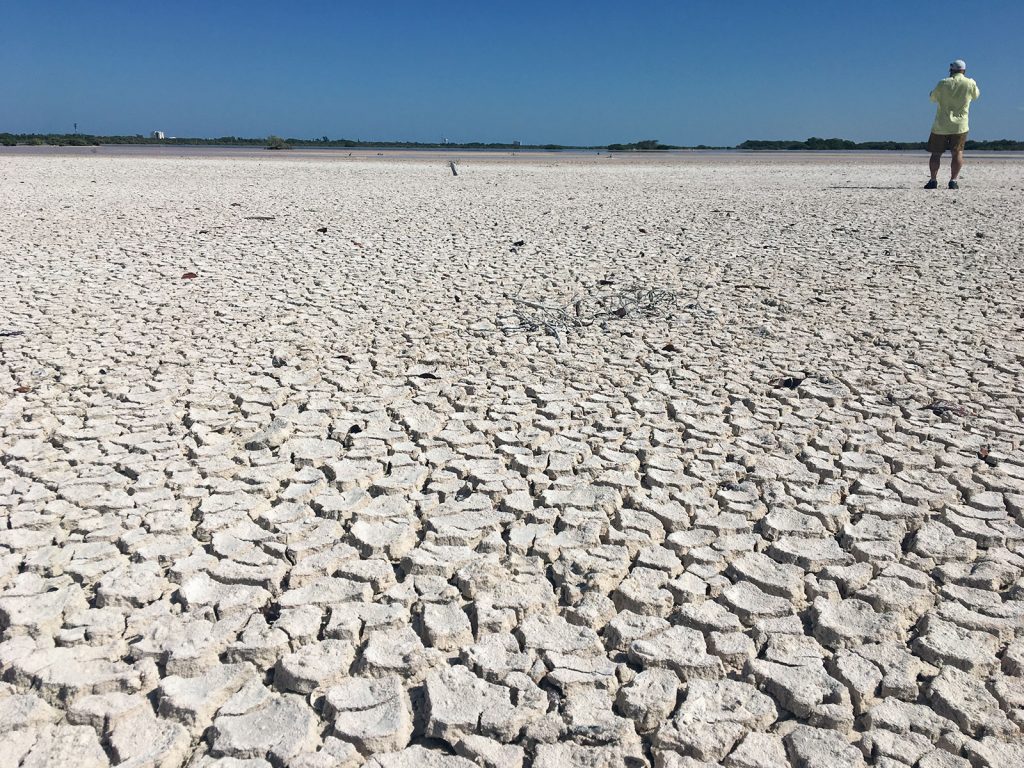 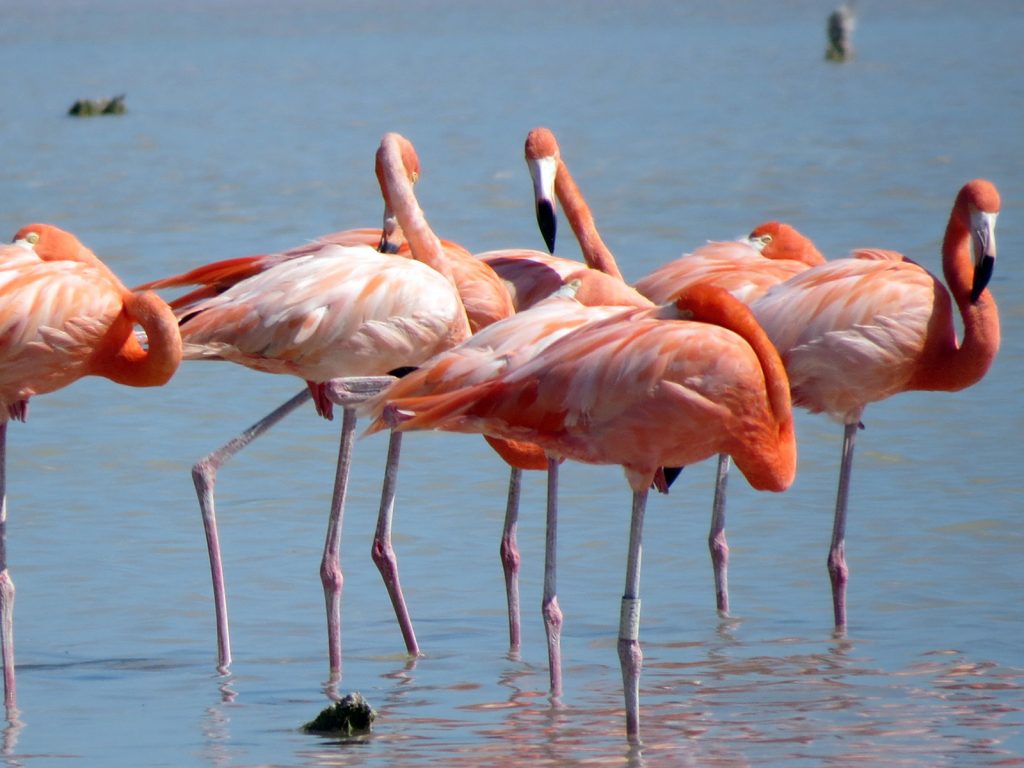 After driving for about 40kms we turned off the highway and went inland. Just a mile or two in we saw lots of flamingos standing in a row — and this time they were MUCH closer to us and we were able to get good photos. We continued for another kilometre and came to the “La Rosada” pink lagoon salt flats. The driver parked the car and we wandered around the shores of the small square salt mining lakes. Many of the little lakes are filled with red plankton and shrimp which gives them a red and pink colour. We spotted a few more flamingos out in the distance. There was a little cantina selling drinks and oranges. Peeled oranges with a sprinkle of chilis on them — not bad, according to Dave and MaryLou. 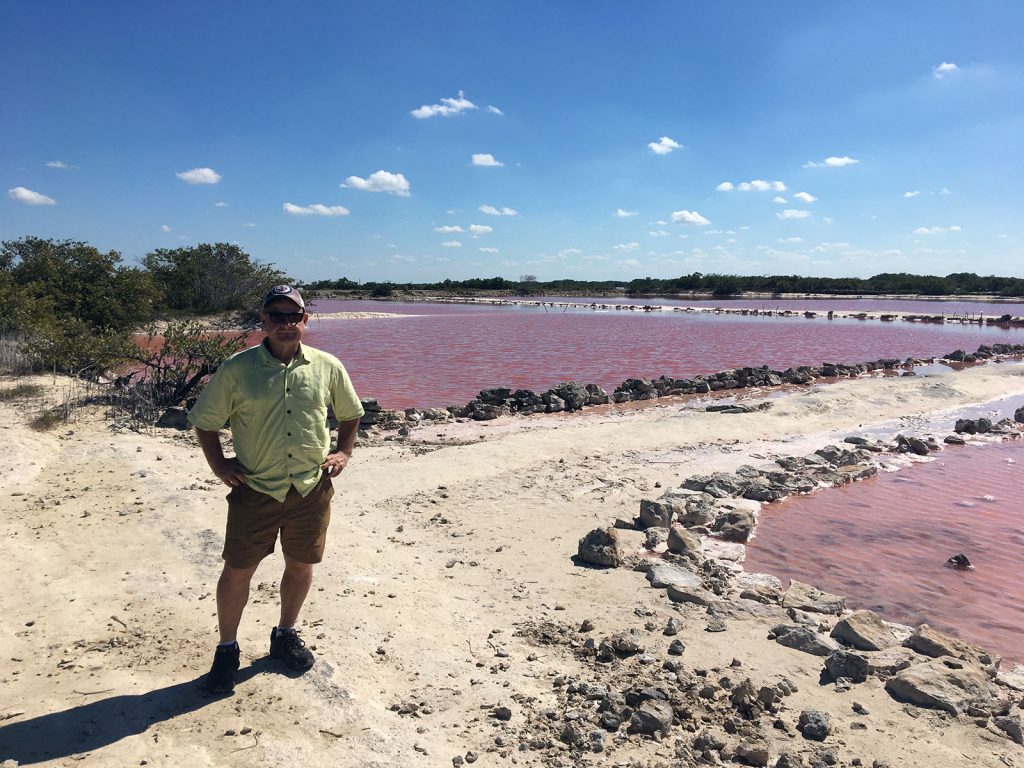 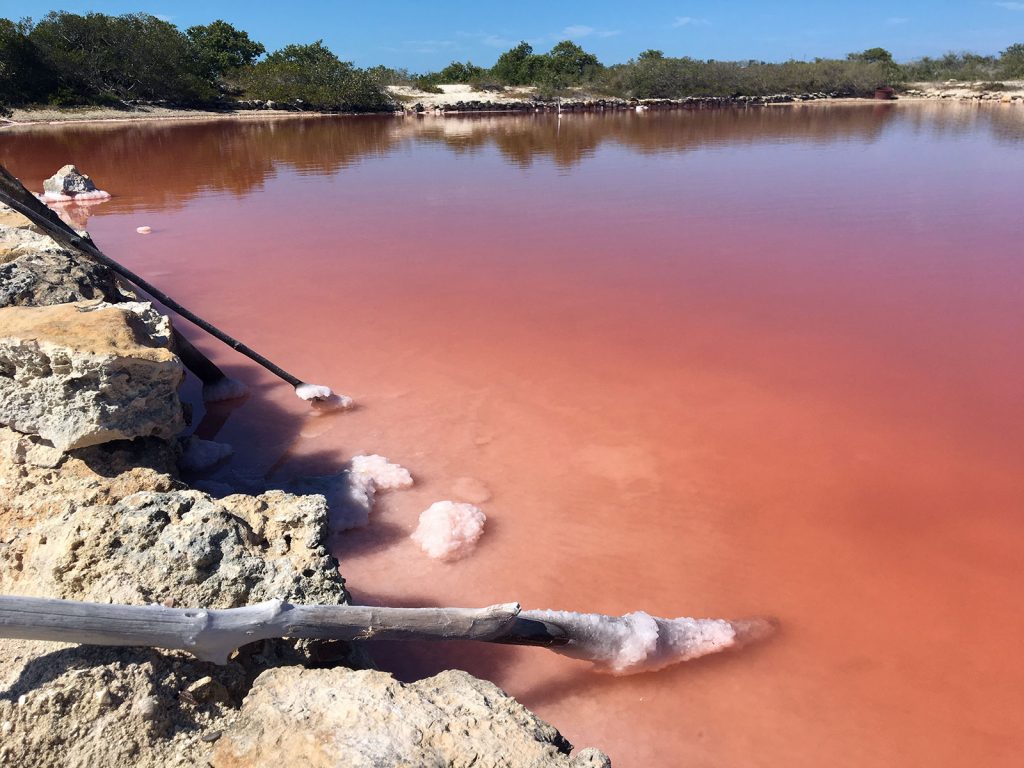 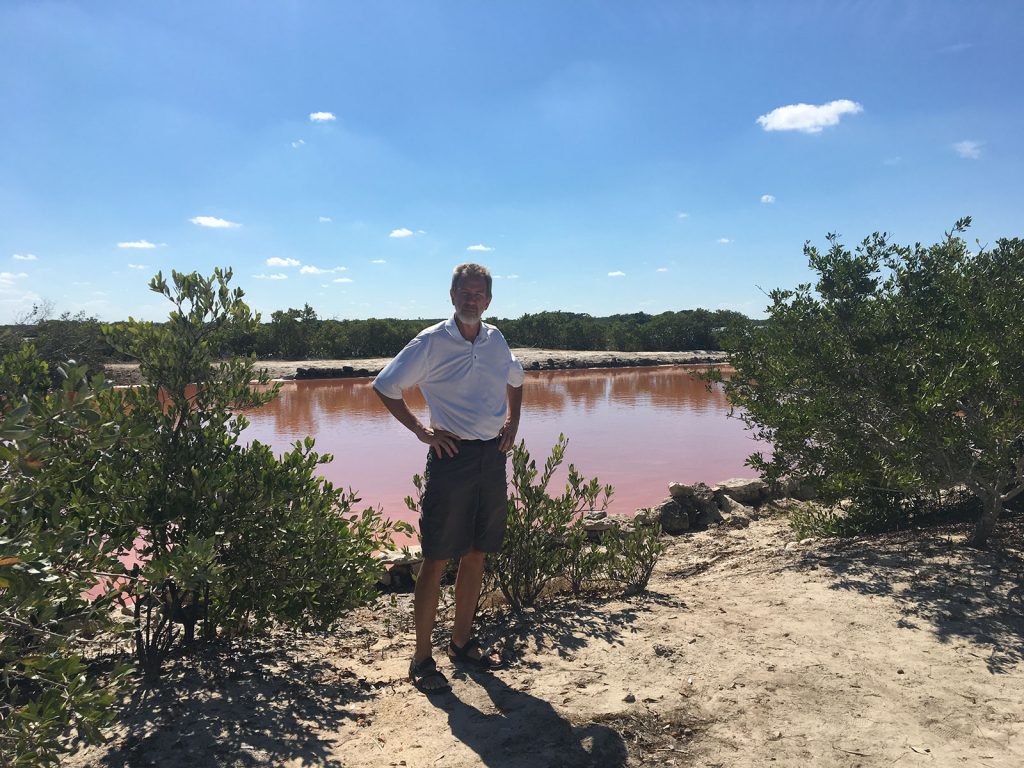 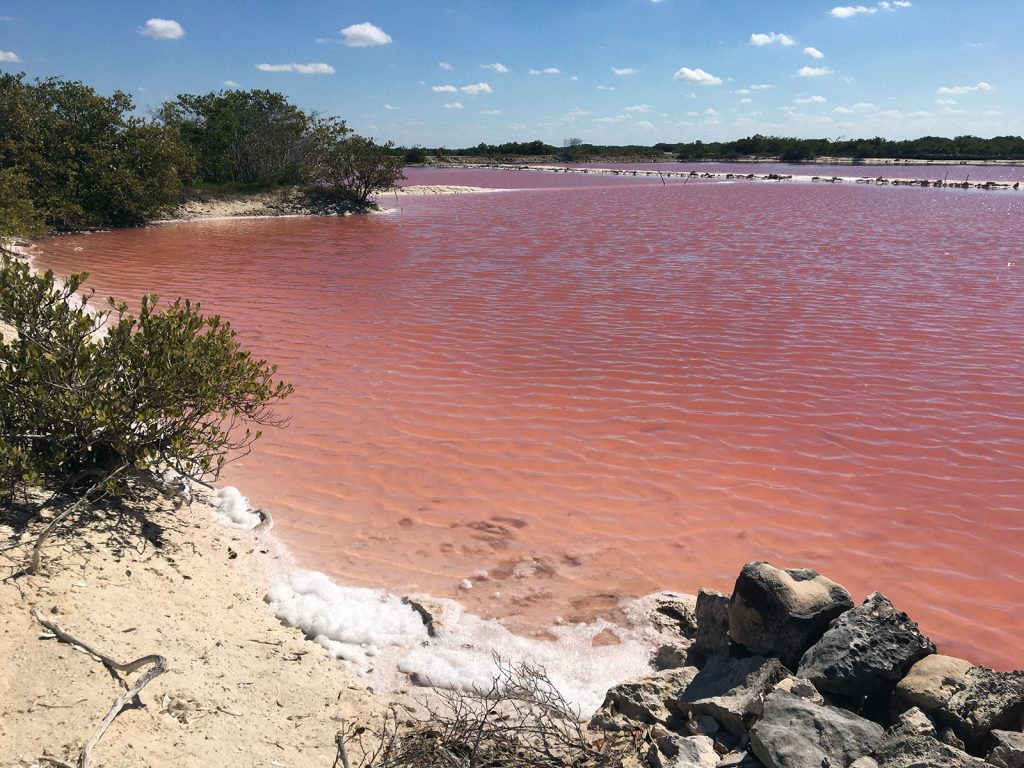 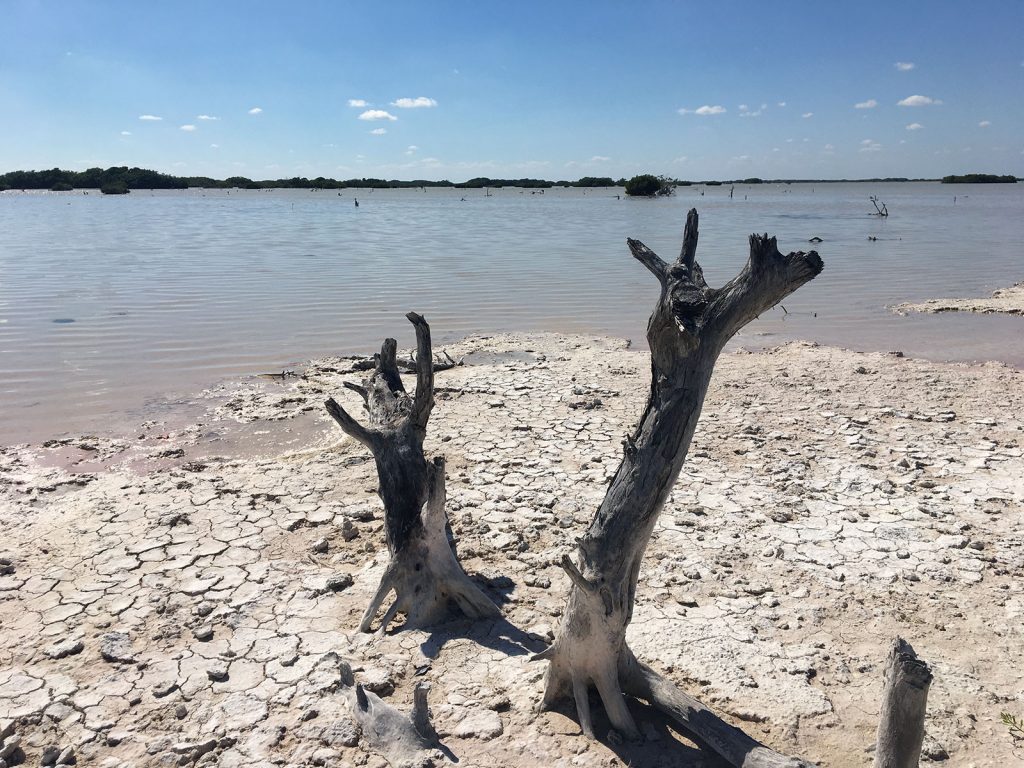 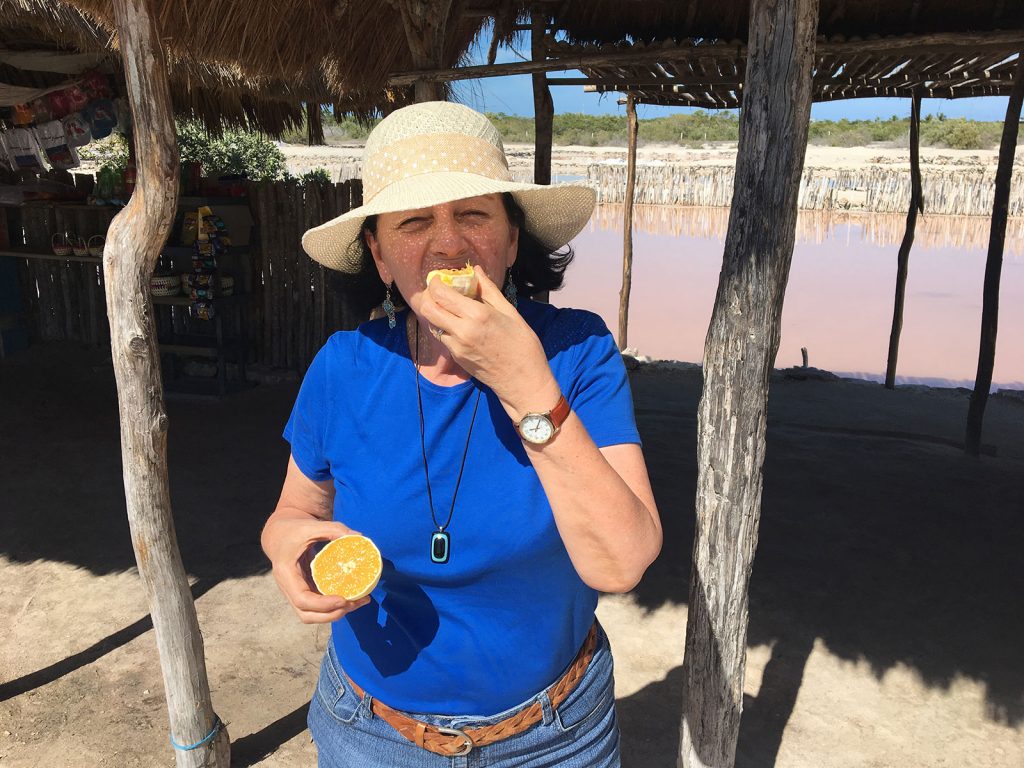 One more stop on this tour: the Mayan ruins at Xcambo. We stopped to pay the National Park entrance fee (75 pesos — about 5 bucks) and drove in. The site is actually a relatively small archeological site. A couple of pyramids, a large courtyard, and some surrounding walls. We climbed the tallest pyramid. I chased a couple of big iguanas around. Then I bought an ice cream cone from a little ice cream wagon in the parking lot and we got back into our taxi and headed back to Progreso. 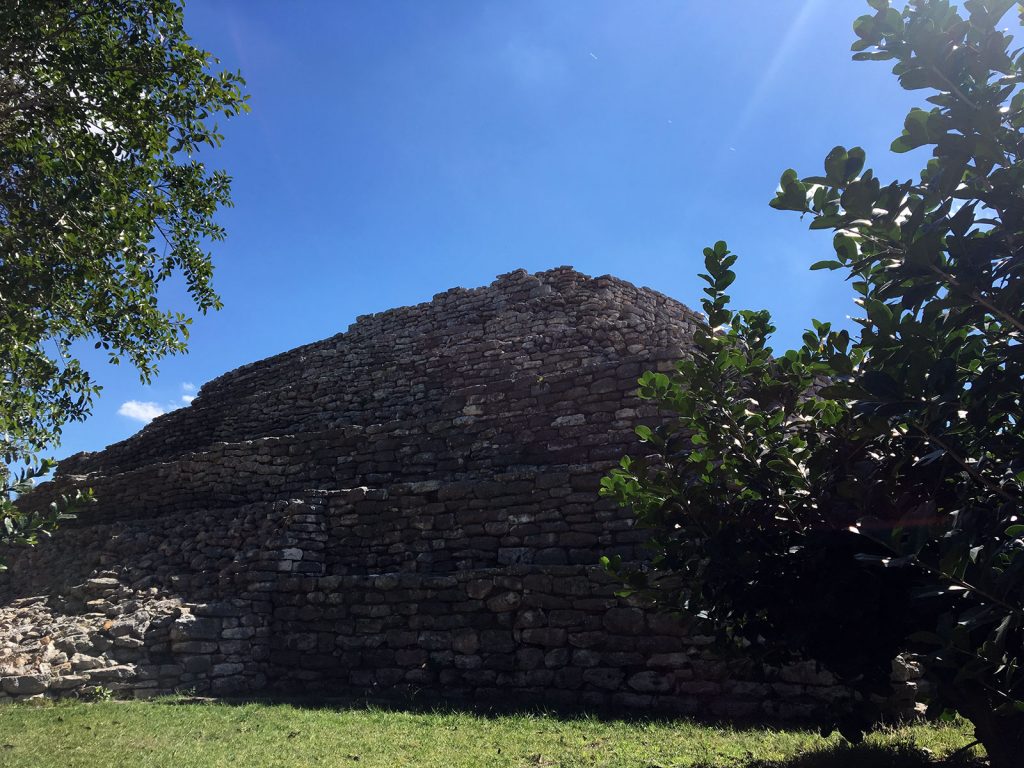 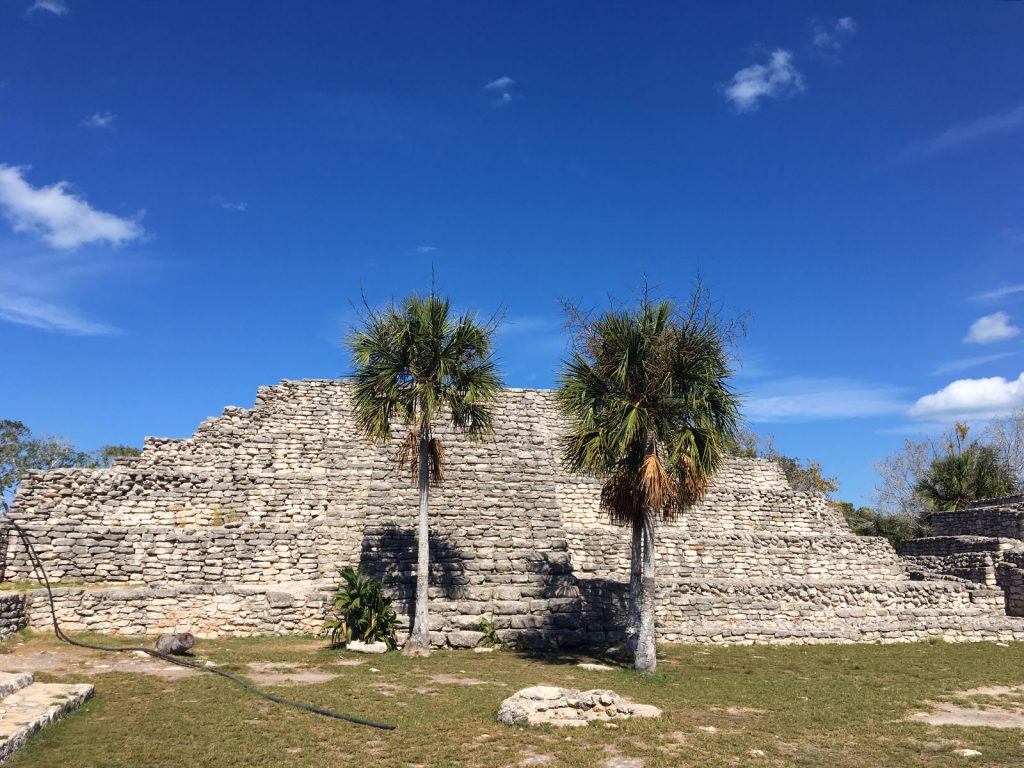 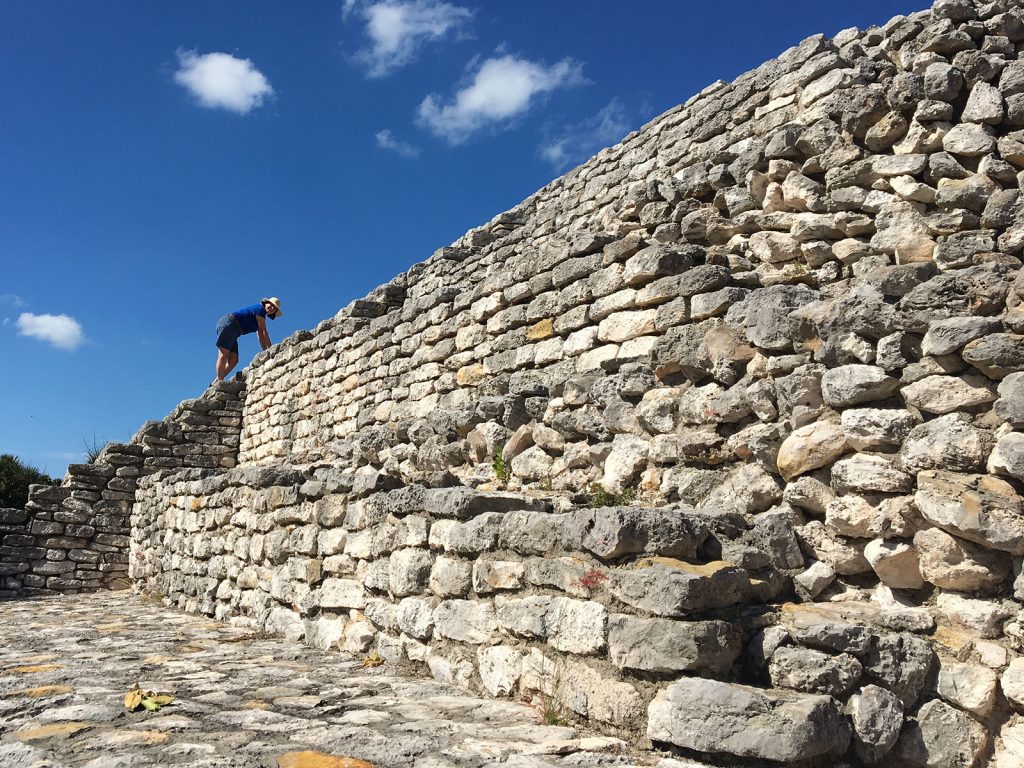 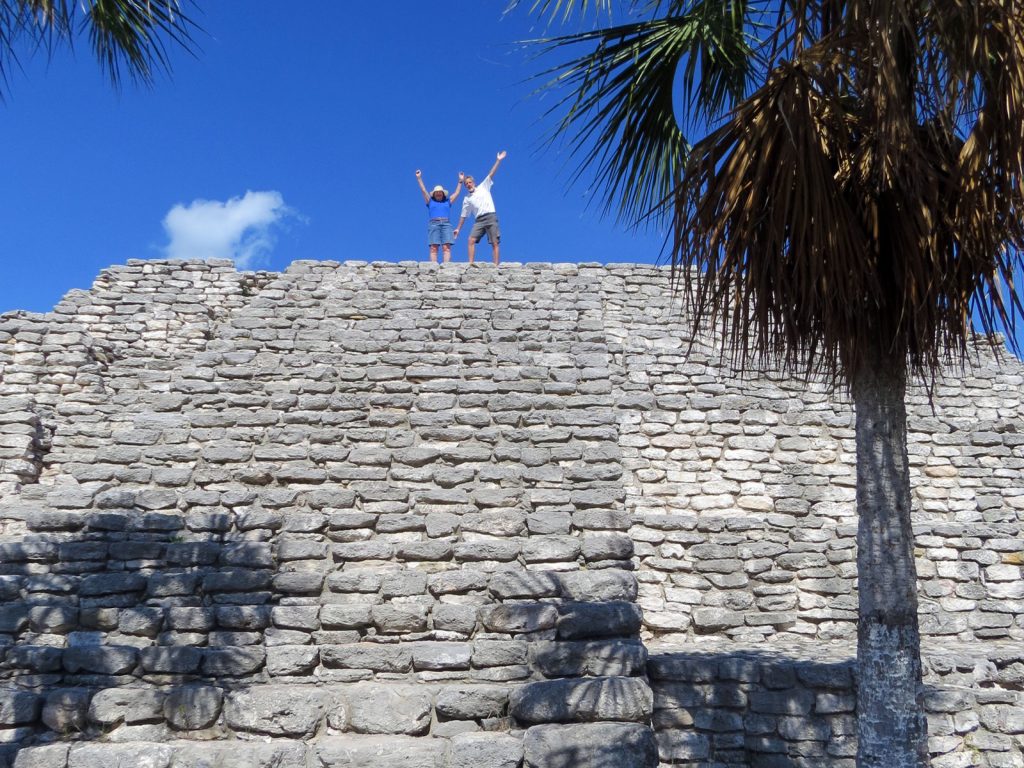 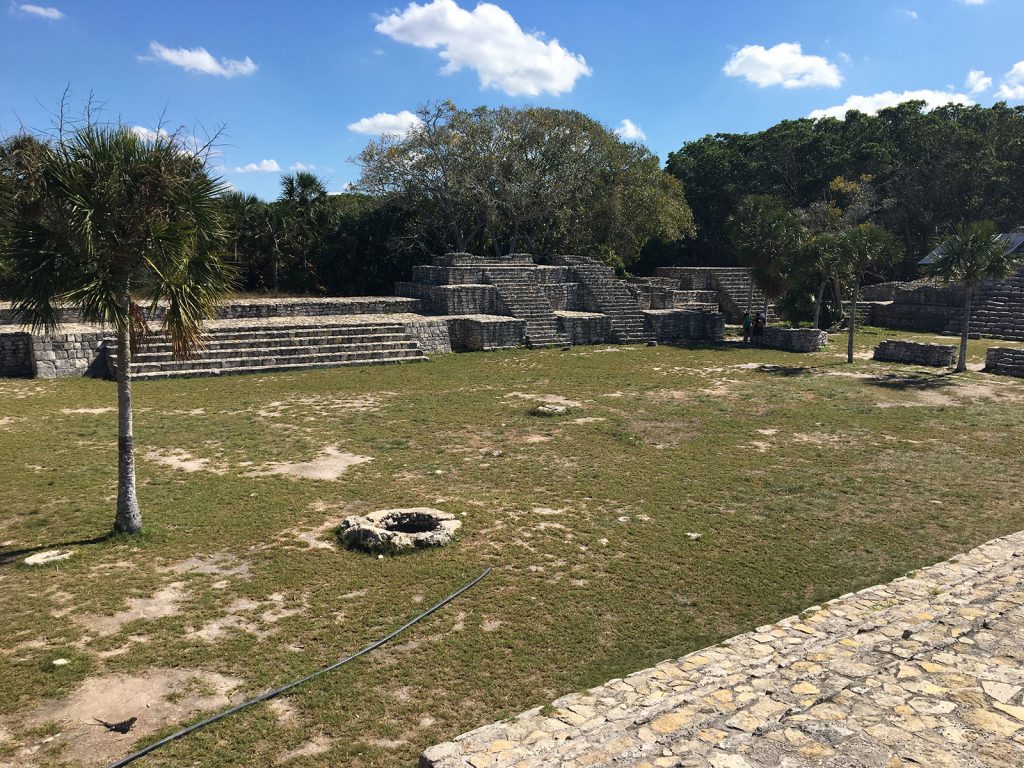 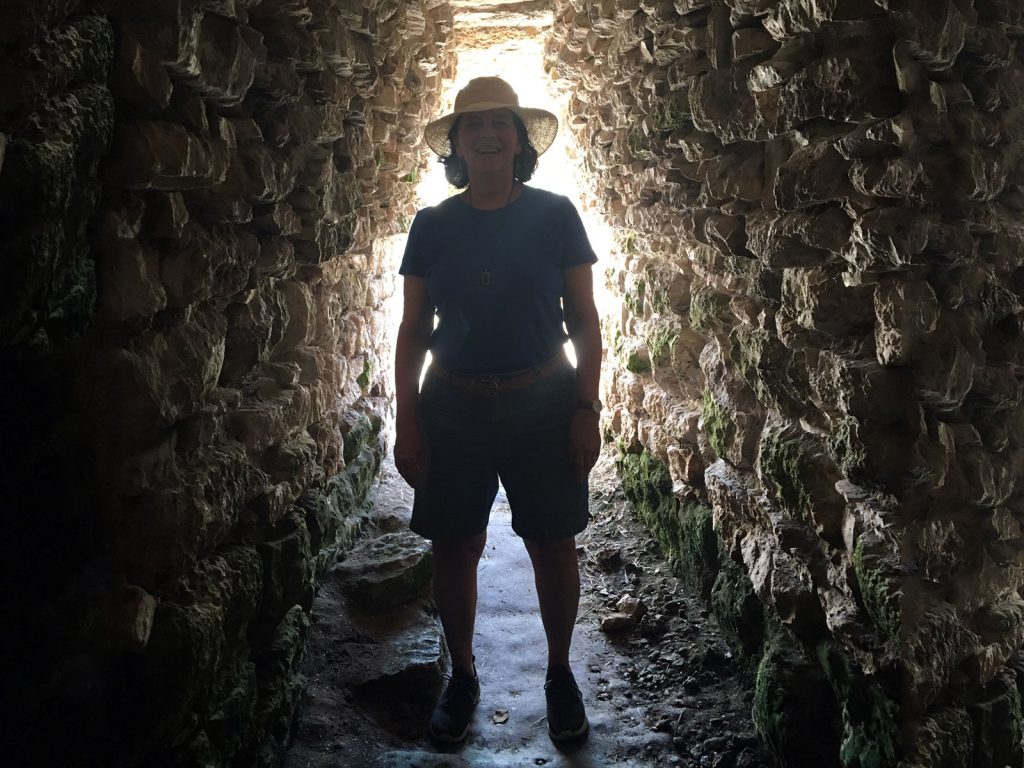 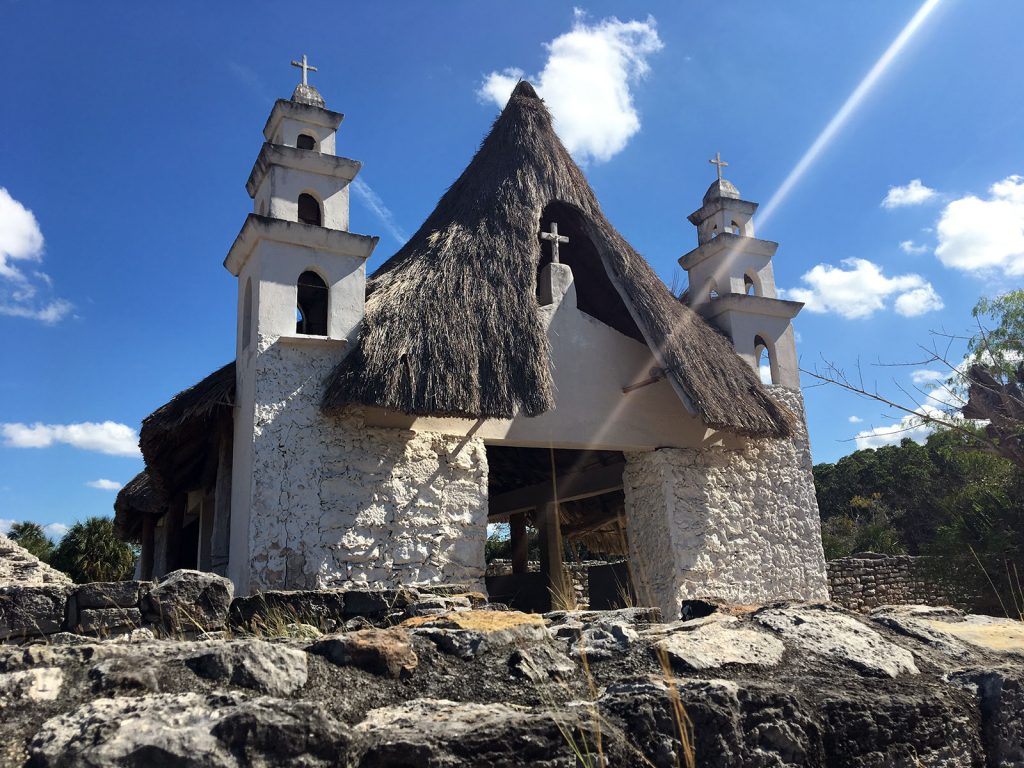 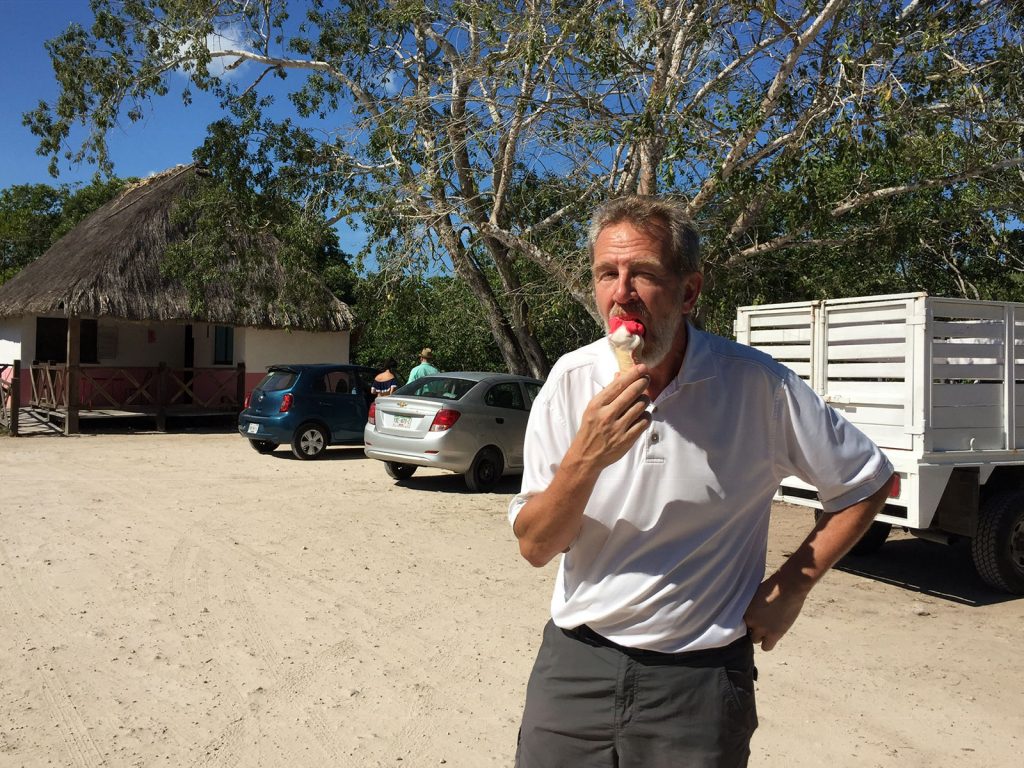 Back in town we headed right back to the beach. The Driedgers went to the massage tent out near the water and I wandered around for a while. I walked to the long pier. The pier in Progreso is the longest pier in the world, jutting out into the Gulf of Mexico for a distance of 6.5 km. It needs to be that long because the coastline here is so shallow. I saw the big cruise ships parked way out there at the end of the pier. I watched semi-trucks and trailers and cement mixers going back and forth out to the end of the pier. I saw the malécon, the long boardwalk that follows the coastline and beach. I heard lots of loud Americans (and probably some Canadians, too) making fools of themselves on the street. I’m sure the prices at the shops were at least triple the regular rate because the cruise people were spending a day in town. 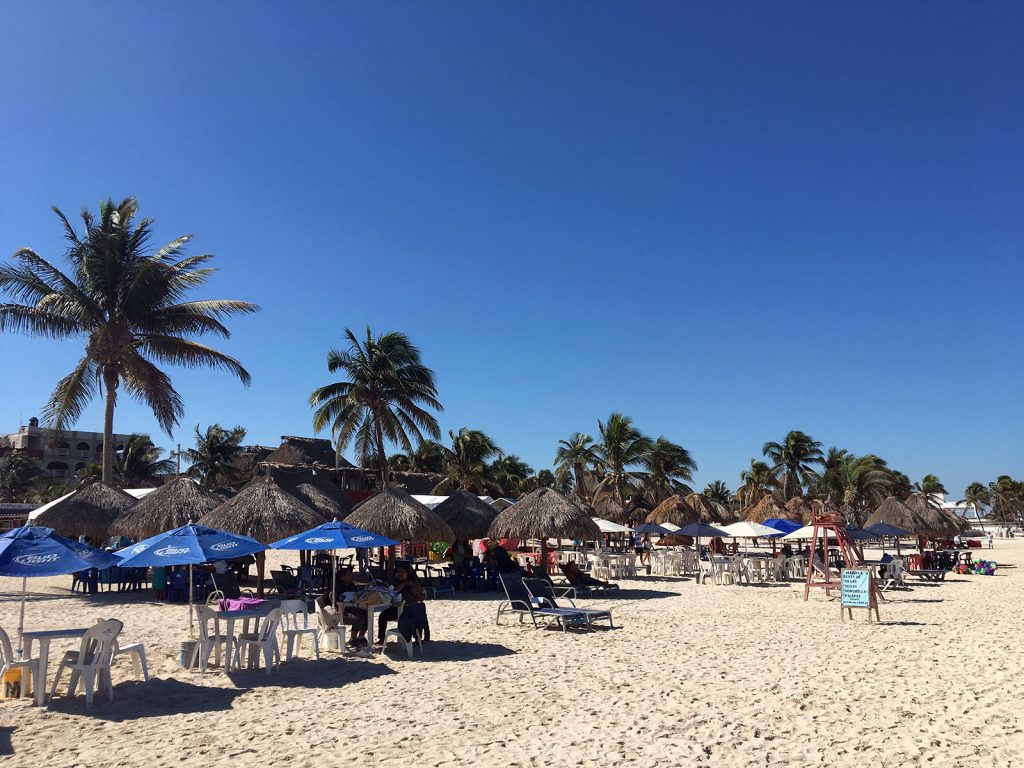 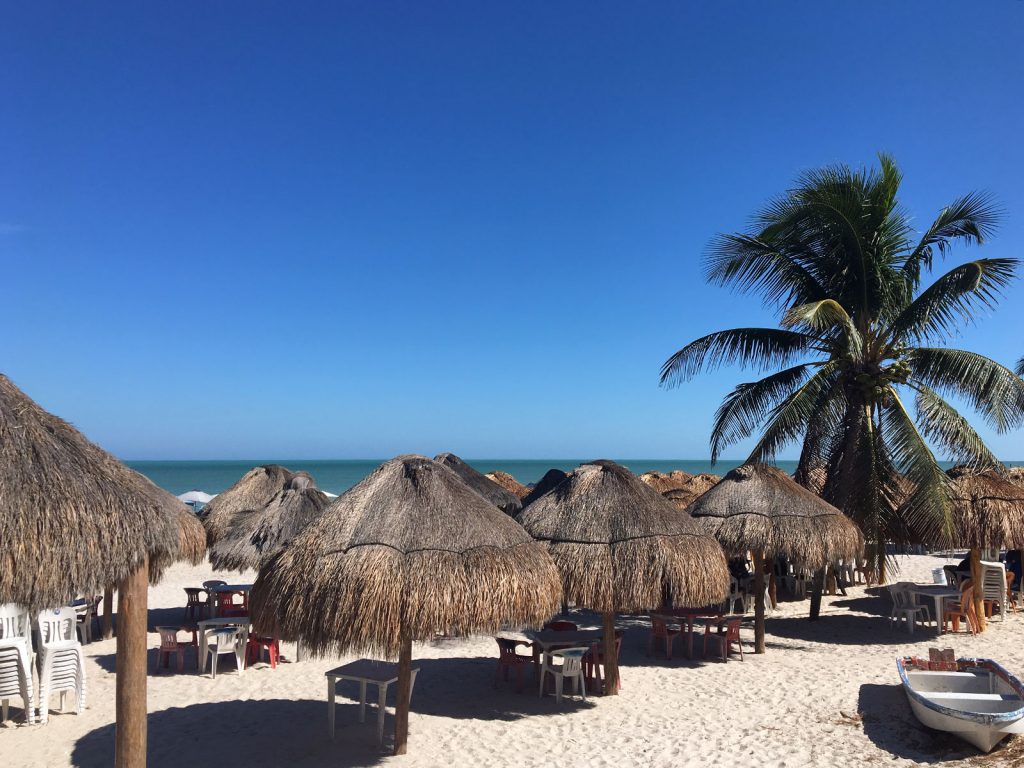 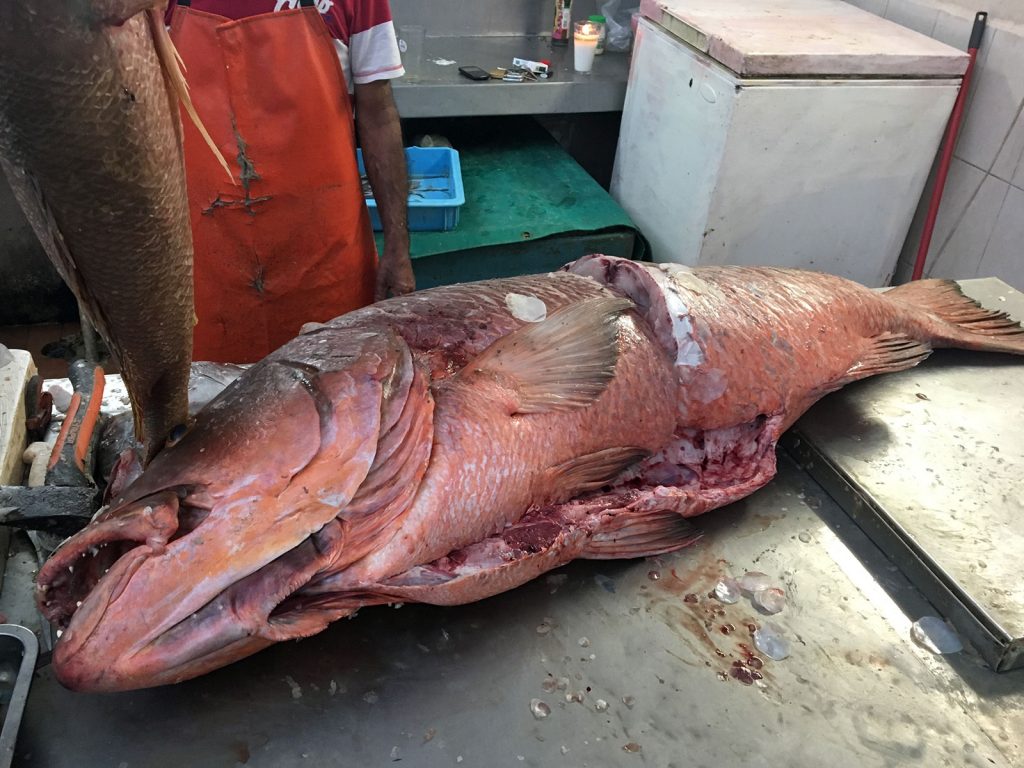 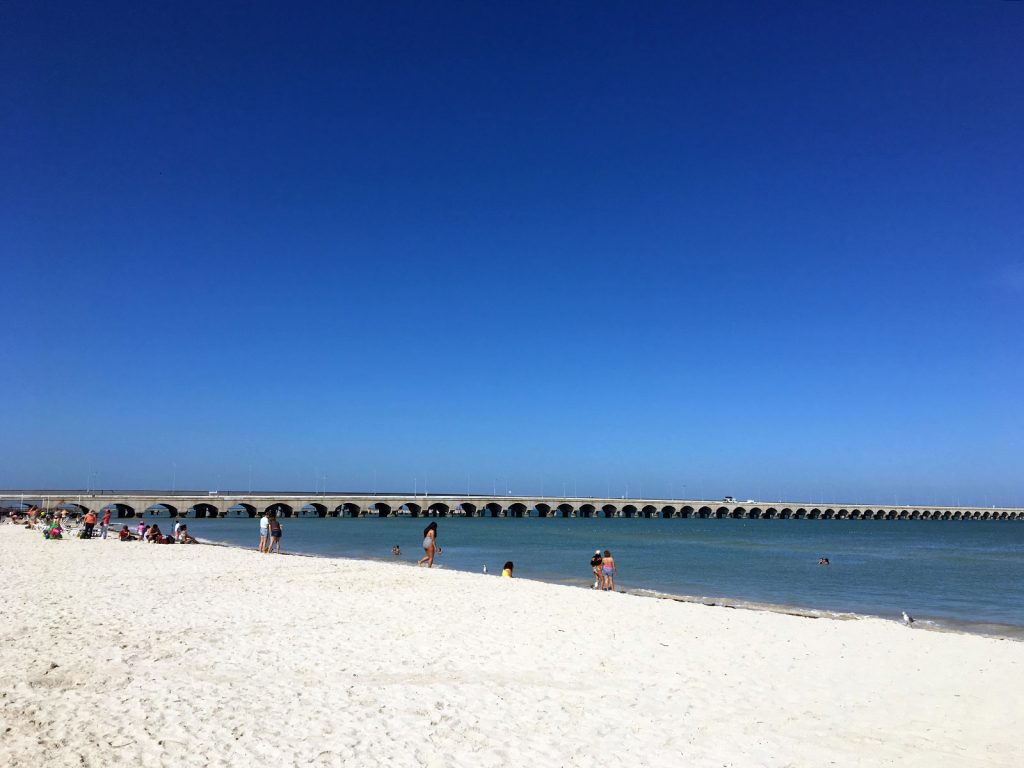 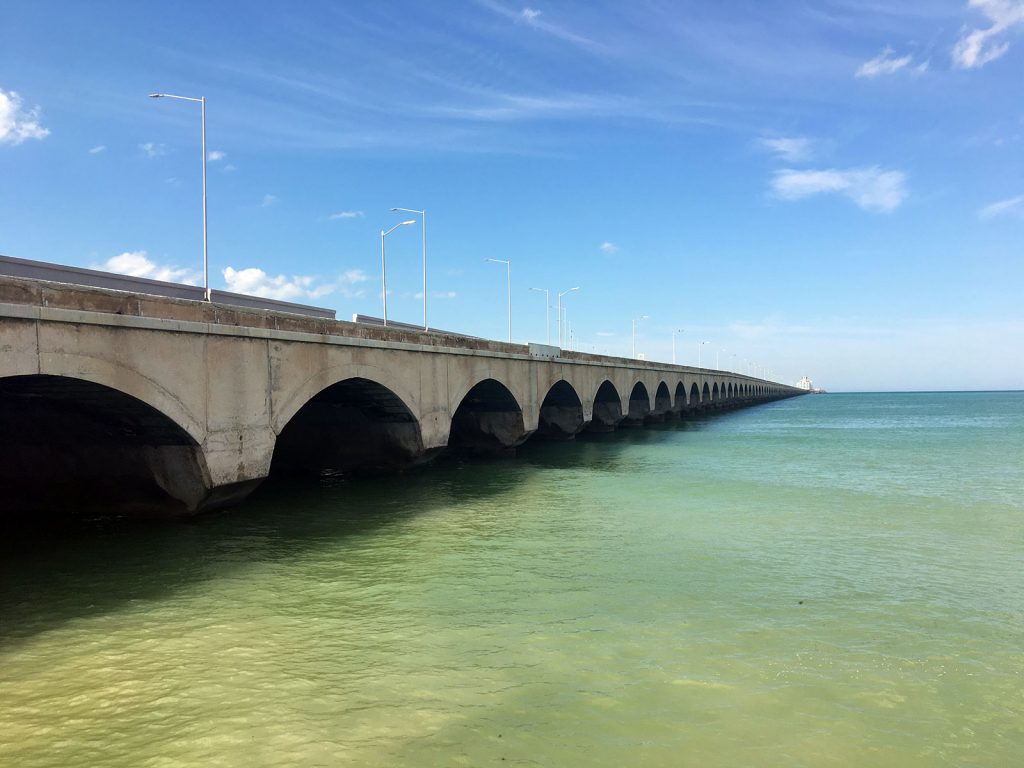 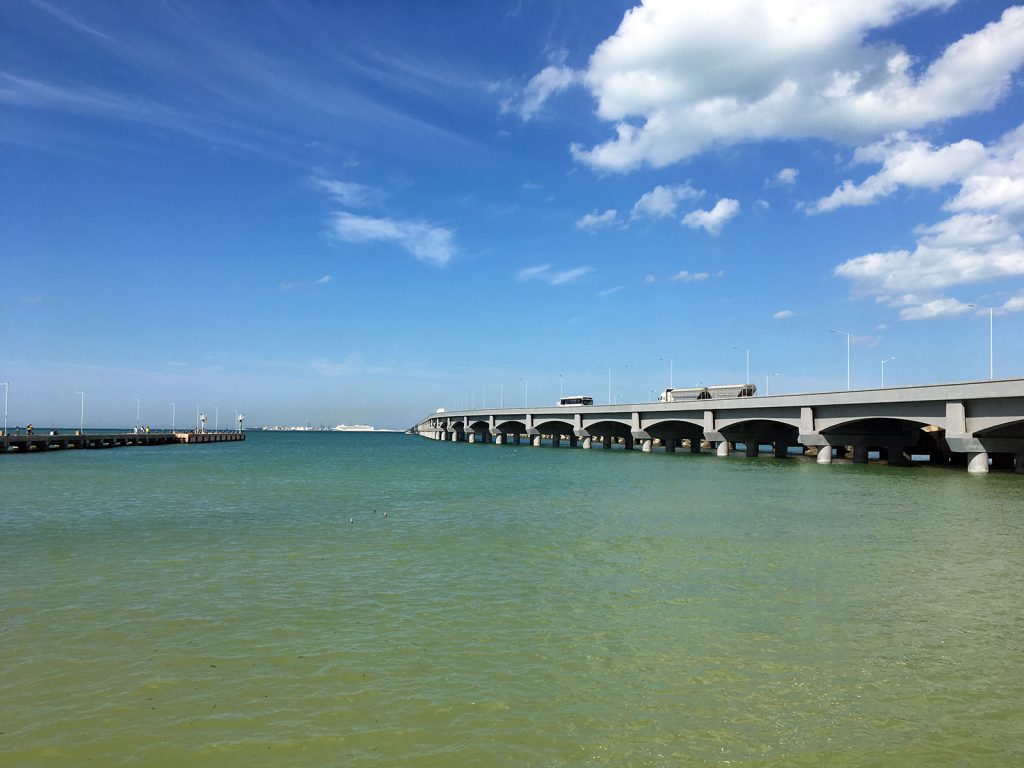 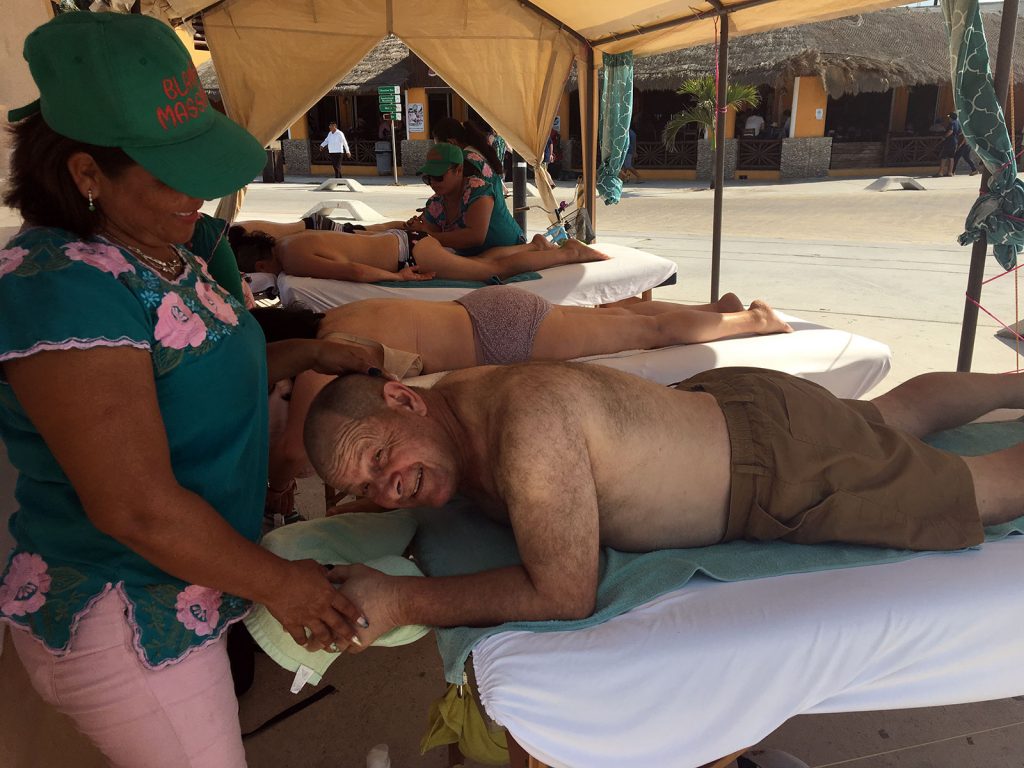 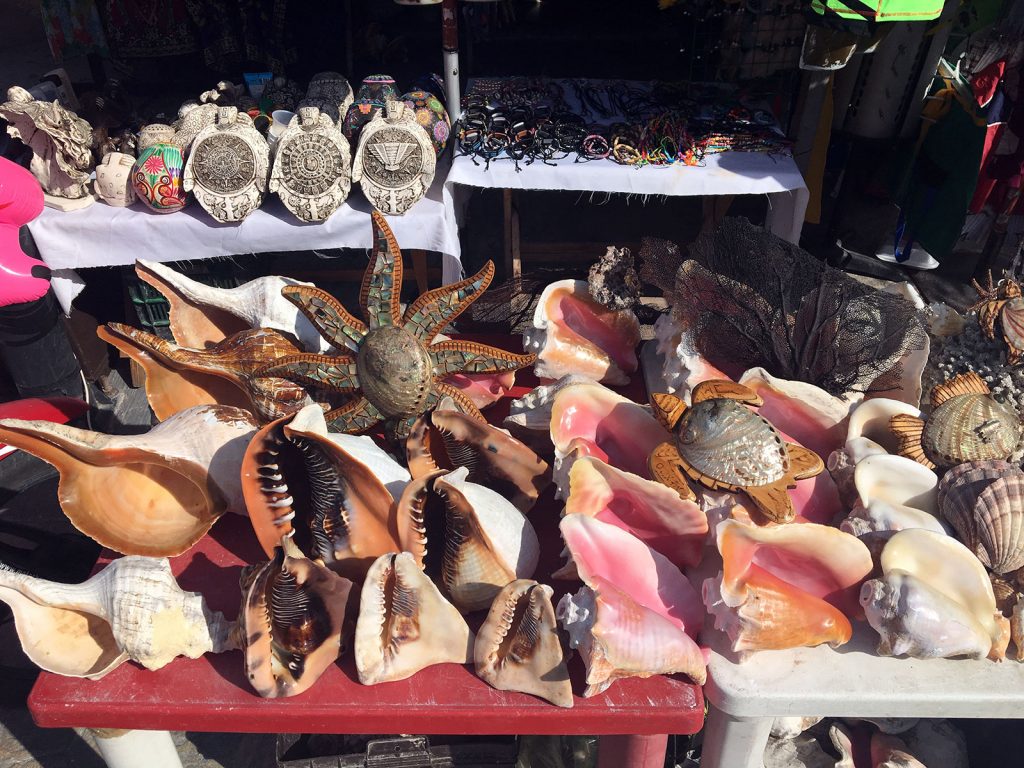 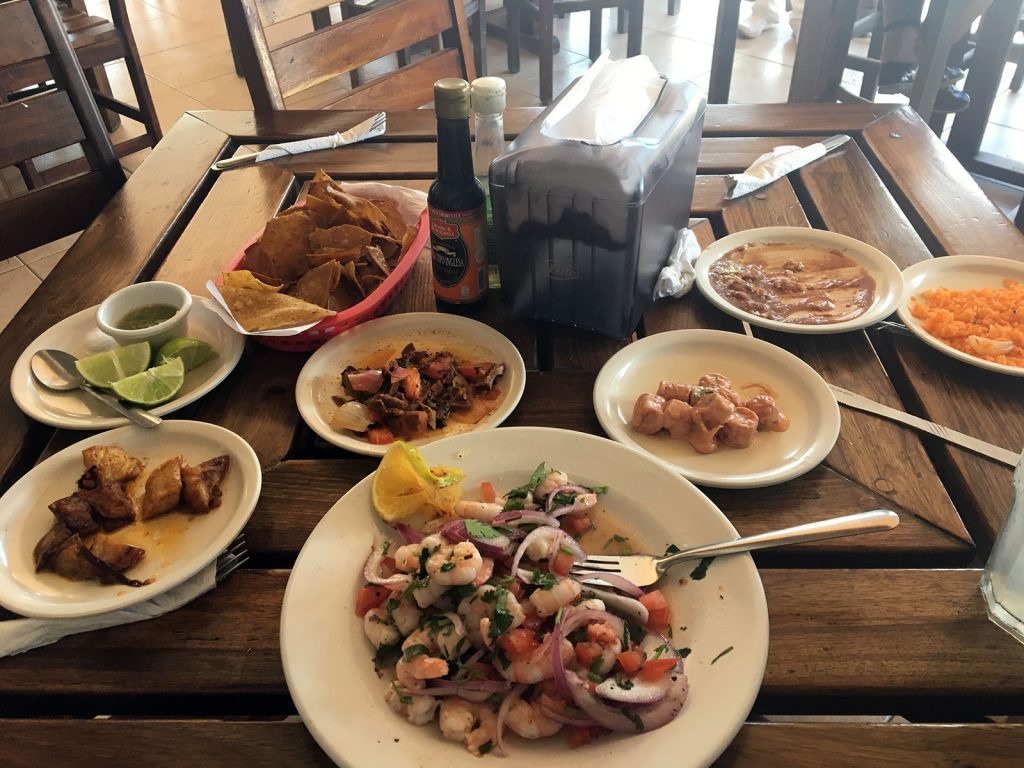 I finally sat down at a table in a restaurant near the massage tents. I ordered shrimp ceviche and a lime margarita and watched people on the beach. After about an hour the Driedgers were all limbered up and rejuvenated from their massages and they joined me at the restaurant. An early supper, but enough food that we would not be very hungry later in the evening.

After we paid the bill we walked back along the main road looking for a grocery store. We stopped at one and bought some supplies, and then kept walking until we got to another (larger) supermarket and bought a few more things, items that weren’t available at the first store. MaryLou ordered an Uber car and we got a ride back to our home in La Ceiba. Some fresh bread and a small container of ice cream from our corner superette and then back to our place.

We had a little happy hour and got on our devices. Dave found the Jets game on his iPad and watched that until things were looking so bad for the Jets he closed up his iPad and invited MaryLou to pick a movie to watch on TV tonight. They settled on an Icelandic film with English subtitles. I was sure I’d seen it before so I went upstairs and showered. I had some leftover pizza and a cold beer, not because I needed it, or because I was hungry, but because it was just sitting there in the fridge and I needed something to do.

After the movie I wrote my journal and looked at all the photos we took on our ‘field trip’ today. By 10:30 it was getting pretty tough to keep my eyes open.