We had planned to try the hike up to the top of Lion’s Head today, but Sue’s trusty iPad told her it would be much too windy. So instead, after breakfast we went out for another LONG walk — out along the promenade. We watched quite a few paragliders land in the park along the coastline. It was hot again, although the gentle sea breeze kept it manageable. On our way back home we walked through Green Park, as we usually do. We even took a little side-trip into the ‘Biodiversity Garden’, a large garden with informative signs that describe the plantings along the pathways. 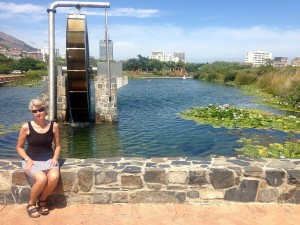 A big water wheel, and across the pond is a large children’s play area. 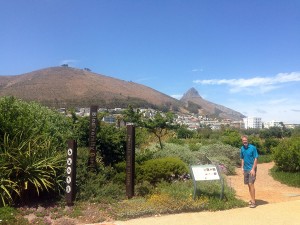 One of the entrances to the Biodiversity Garden. 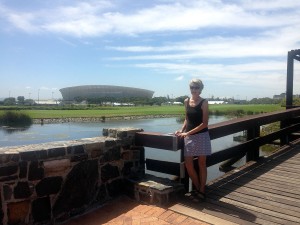 The golf course with the World Cup Stadium in the background.

Back at our apartment, we had lunch out on our balcony. A perfect day (again!). So much for trusting that iPad.

Sue read a bit in the afternoon and we took turns having a little snooze. We tried to watch a bit of American news on our AppleTV — “Good Morning America” was analyzing the results of the first 2016 Presidential primary in Iowa. The big news: Trump lost to Cruz, and Hillary and Bernie Sanders tied. Well, you can only listen to that ‘noise’ for so long. Time to open up another of my imported fancy beers and go sit out on the balcony and look out at the real world.

By supper time the wind had picked up quite a bit. (See? I TOLD you the iPad was right!) We actually both took a sweater out with us when we went for supper.

We went to Rustica, an Italian-style restaurant just down the street. The food was okay, but we decided we’d try a few others before we’d go back there. We stopped at the Woolworths to pick up some eggs (tomorrow’s breakfast) and a chocolate bar (tonight’s night snack) and a big cappuccino to go (to go with our chocolate bar).

Back at our stations I connected the TV to my MacBook and played another of my movies, “In the Heart of the Sea”. It’s a Ron Howard film that tells the story of how Herman Melville came to write his epic, “Moby Dick”. And so it is sort of the ‘real’ story of Moby Dick. Well, not really. But it’s 2 hours of a very big whale getting back at the whalers who are trying to kill it. It was okay (but we we’ll try a few others before seeing it again!).

At one point in the movie, when the sailors are stranded and starving on a deserted island thousands of miles from civilization, Sue said, “Can’t they just text somebody for help?” This, while she was texting with Alex while watching the movie. Seriously! What is this world coming to? We can’t go on a ‘real’ hike, and we can’t even enjoy a ‘virtual’ disaster without first poking and swiping that damn iPad! The only relief is that the machine has a battery that runs down — so before we go to bed we need to close the lid and plug that baby in and let it charge overnight while we too get some rest. And then in the morning, we’ll wake up all refreshed and ready to face a new day — but first, let’s check the iPad and see what we missed while we were sleeping. And let’s see what the weather forecast is for today…