Every athlete exercises self-control in all things. They do it to receive a perishable wreath. 1 Corinthians 9:25

When I got downstairs this morning the Driedgers were already both in the kitchen, cooking up their breakfasts. Two is company, three’s a crowd. Actually, even TWO is a crowd in our kitchen.

MaryLou, who has decided to join the boys at the golf course for the first nine holes on alternate days, was the first one ready to go this morning. She was sitting on the couch in her golfing outfit, waiting for Dave and me to get the show on the road.

BUT IT IS RAINING! Yeah, that’s right. Raining. Today is the first day since late January where the forecasted high is UNDER 30. Twenty-nine. And rain. ‘Tis an opportunity not to be missed. The road outside our windows was a little damp from some early morning precipitation. No rain as I ran ahead and registered the three of us, but as we lined up at the first tee the starter pointed at the sky and said something about lluvia. There were rain clouds up there.

By the time we finished the third hole there was a fine mist coming down pretty good. We were wet. I finally unfurled that cheap plastic poncho that I got at the Bethesda Tournament last summer, but by the time I figured out which end was up and where the arm holes were, I was sopping wet. So were the Driedgers. But we pressed on. And the rain stopped. And started. And stopped. 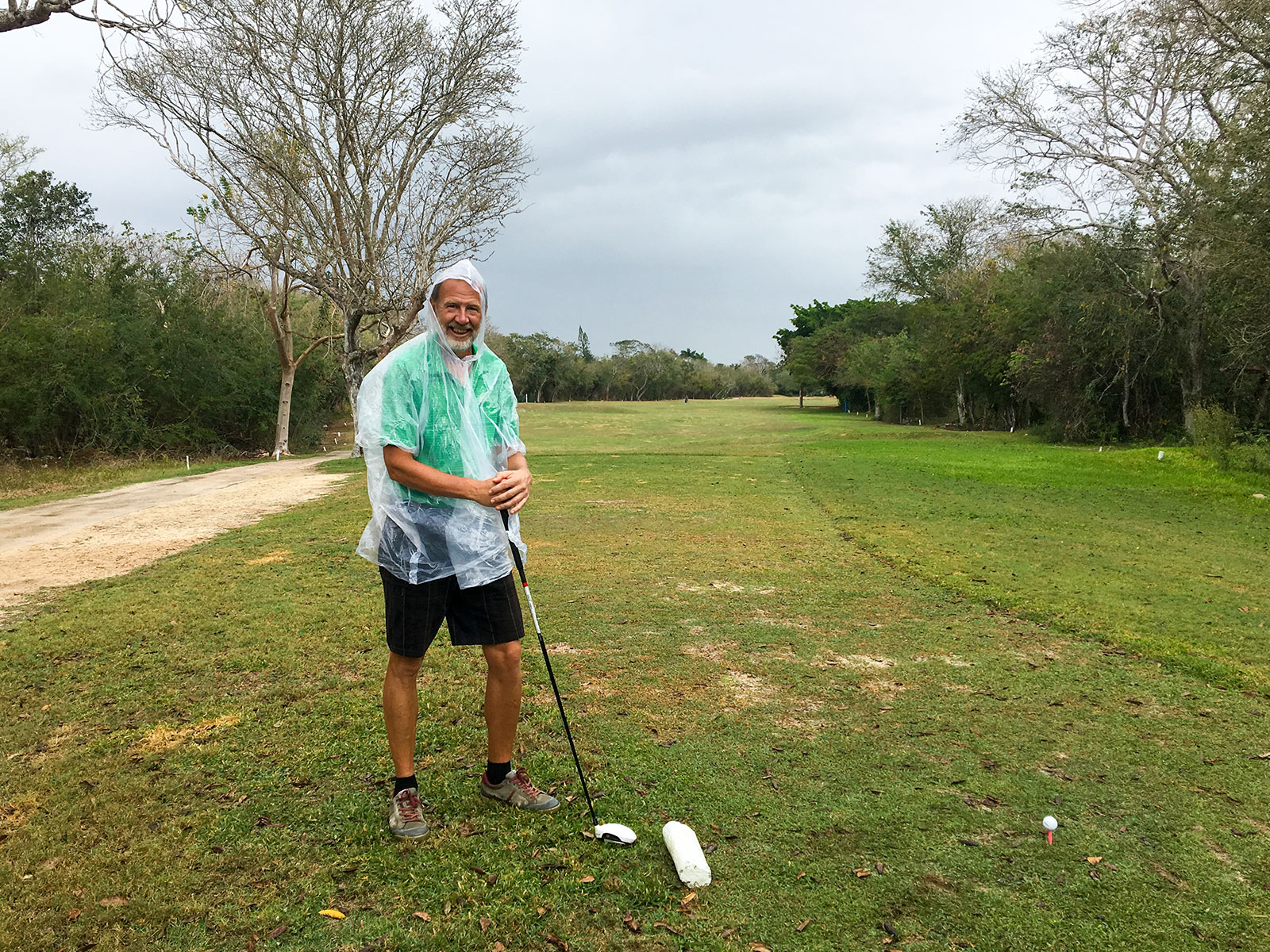 After we putted out on the ninth hole Dave handed MaryLou the little golf bag that he’d been portering for her and she headed home. Dave and I soldiered on. And we were not the only ‘crazy’ golfers out there. A woman and her caddy stayed right on our tail ever since we snuck by them in that downpour on the fourth tee. And a man with a pull-cart did his best to stay ahead of us.

When we finished the round we rolled our pull-carts back to the house so we could disassemble our gear and let it dry out in our carport. I put in a load of (wet) laundry. I phoned the mini-super and had another big jug of water delivered to us. We made sandwiches for lunch.

After lunch Dave and I sat around downstairs and rested from our morning exercise. More crosswords. More looking at our computers. Waiting for happy hour. When the appropriate time arrived, Dave started up our Rocket-TV. The internet was a bit flaky (what else is new?) so there were quite a few stops and starts, but we plodded our way through the movie “Mary, Queen of Scots”. Then it was time for supper.

A little after six we got ready to go into town. We took an Uber to the AltaBrisa mall. Dinner at P.F.Changs. Then off to the bowling alley for our second sporting event of the day. 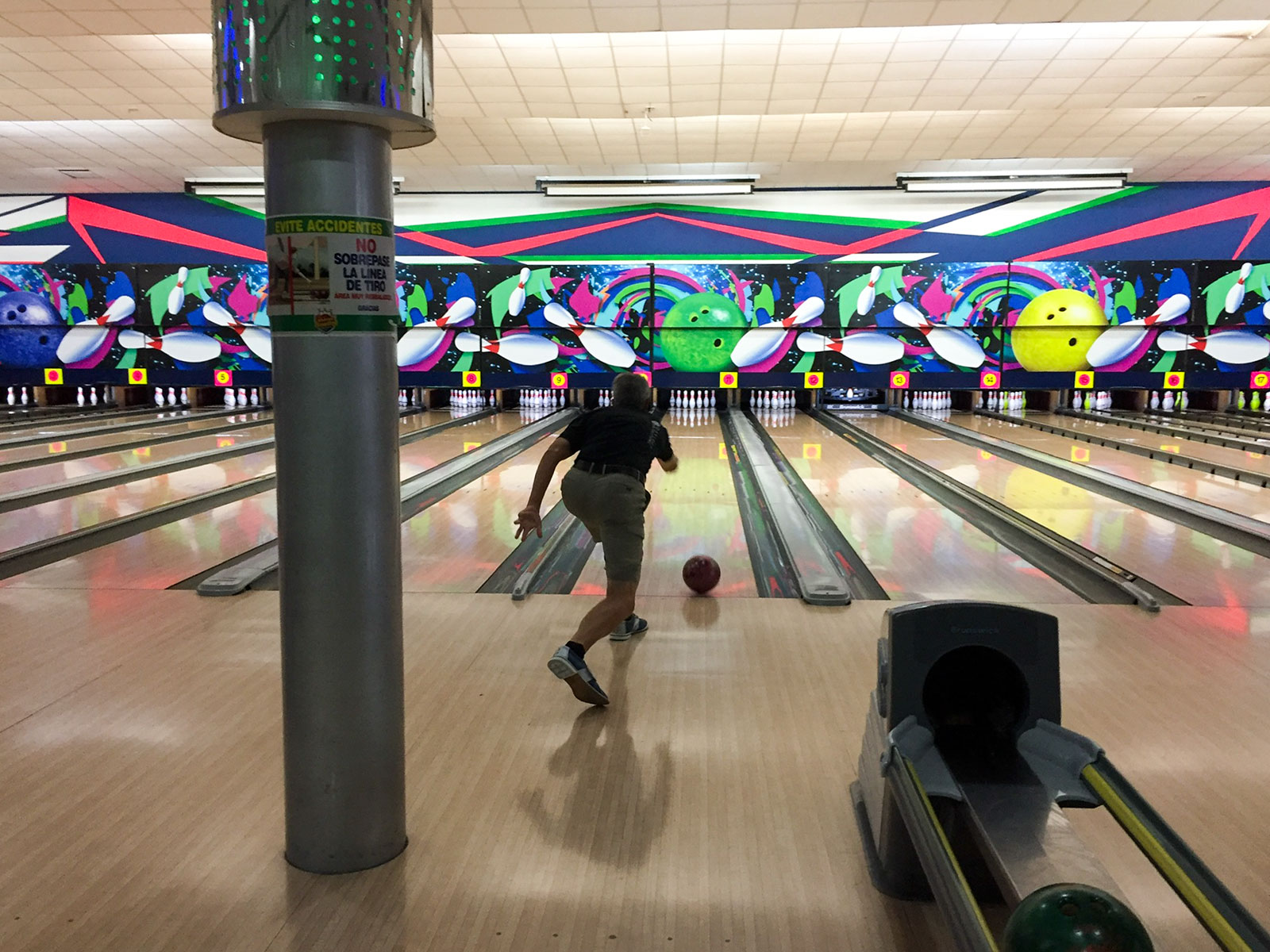 I rolled my first ball right down the middle, knocking down all ten pins. Great start. Unfortunately my success was short-lived. Although there were times when the pins ‘shuddered’ a bit as my ball came rumbling down the gutter, clearly I was no match for either of the Driedgers. The practice they’d had when they visited these lanes a few weeks ago really paid off for them tonight!

In front of the bowling lanes were a few well-worn pool tables. Before leaving, Dave and I played a few games while MaryLou took a walk around the mall. We played for about an hour, the minimum amount of time we could ‘rent’ a table, which gave us sufficient time to figure out the ‘slope’ of the table! Today pool was likely my strongest sport. Perhaps, after I’ve had a little taste of the Manitoba winter, I should take a drive down to Steamboat Springs, just west of Denver, and sign up for the annual triathlon there. 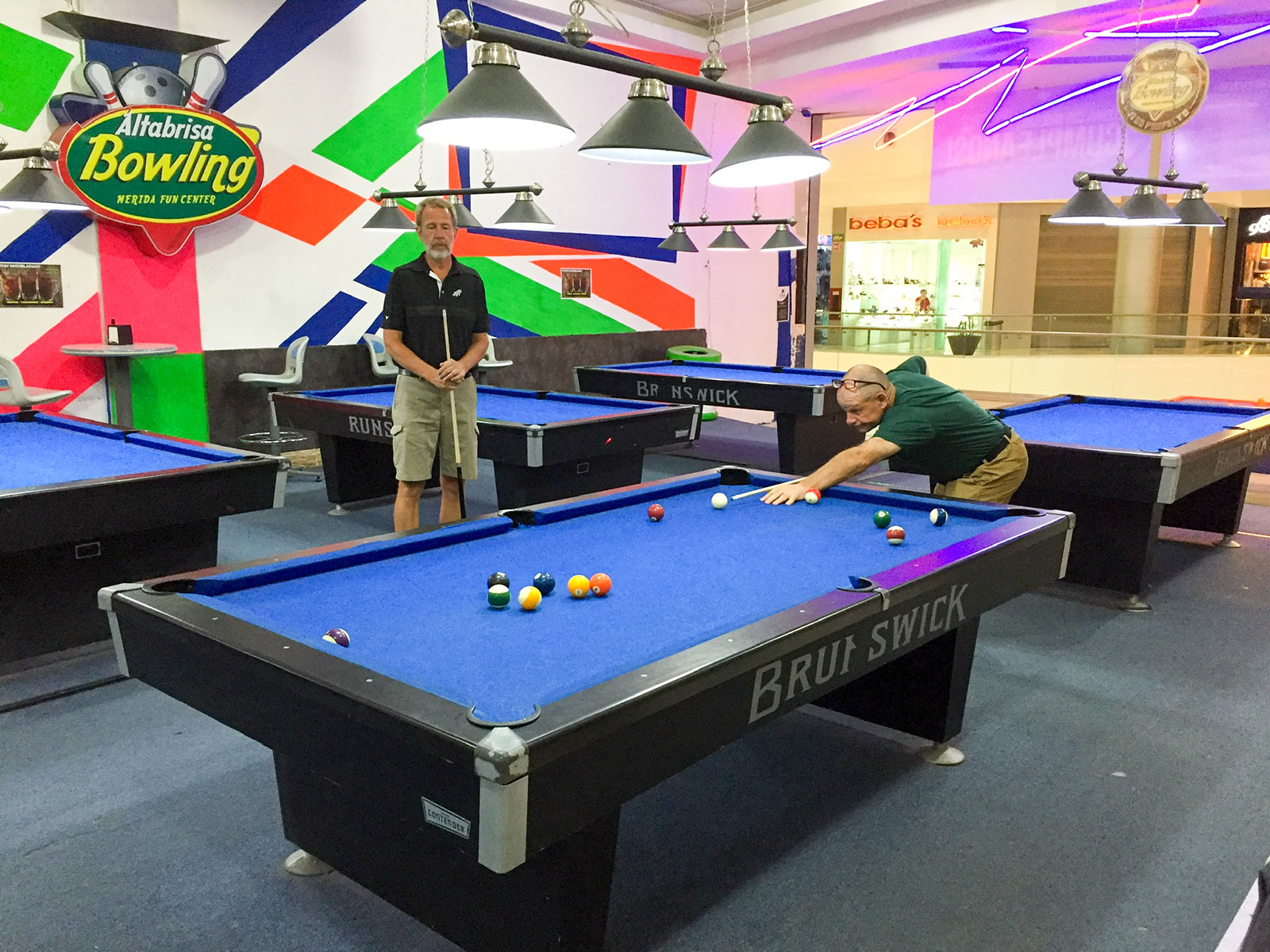 Well, after all that physical exercise, it was time for a treat! Fortunately there was a Dairy Queen kiosk just outside the pool hall. Chocolate dips and a waffle cone. Maybe the highlight of the day!

We Ubered home. Dave tried to entice MaryLou to join him on the couch for another episode of Mrs Maisel but she was too tired and went to bed. I tried valiantly to keep Dave company, but that didn’t last too long either. I went upstairs and tuned in the CBC National so the ‘At Issue’ panel could bring me up-to-date on all the shenanigans going on in the Trudeau government. Ah, the universe is unfolding as it should.