Happy Waitangi Day, everyone! The Treaty of Waitangi was signed on 6 February 1840 at Waitangi here in New Zealand by representatives of the British Crown and more than 40 Maori chiefs. The Treaty made New Zealand a part of the British Empire, guaranteed Maori rights to their land, and gave Maori the rights of British subjects. So it’s quite a different history compared to how indigenous people were treated in Australia (shot!) and Canada (moved onto reserves). Also, in the last twenty years or so, the New Zealand government has worked hard to reconcile and pay restitution. And for the most part, that has worked. They paid a LOT of money to the Maori, and gave them a significant share in the ownership of fishing and lumber industries. And consensus is that as far as they are able, they’ve made things right. So, Happy Waitangi Day! 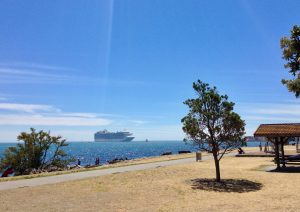 We celebrated by doing very little. Sue went to the local grocery store before lunch. After lunch Graeme came by and we talked about their weekend wedding experiences and also about the concert last night. Graeme was going for a swim, but came right back to tell us that there was another big cruise ship coming into port — if we wanted to see it we should hurry to the beach. We did. And we saw it. It was the “Emerald of the Sea”, a Princess cruise ship. It had 3100 passengers and 1200 crew aboard. It would be in port for 8 hours.

After lunch we were going to go golfing. I wasn’t really all that interested in the Super Bowl game, but my friend Ed sent me a text and assured me that the Falcons were going to win. Well, that MIGHT be worth watching! So, since our tv receiver was acting up, we invited ourselves over to watch it on Graeme and Robyn’s TV. Graeme was lying on the deck reading a book, until he fell asleep. Robyn was off golfing. So Sue and I sat on their couches and watched the game. And it was a very good first half! I was fairly convinced that we could already just bugger off and go golfing — the game was as good as over at halftime. And I wasn’t interested in the country singer who was ‘warming up’ the crowd at halftime. Nor was I all that ‘gaga’ about Lady Gaga. (Little did I know that would be the highlight of the game!) But I guess somehow Belichick and Brady once again figured out a way to deflate a bunch of footballs during halftime — and don’t you know it, they mounted a come back and were able to tie the game and win it in overtime! In the old days, whenever the Canadiens beat the Maple Leafs in the Stanley Cup, my dad would say it was all rigged — the TV stations rigged the game so they could make more money. Well, actually they don’t need a lot of hush-hush money and a cheating quarterback to make the NFL work — all they need to do is suck me into watching a game and cheering for one of the teams on the field — and for sure, without fail, the OTHER team will win! Guaranteed. Every time! What a waste of a lovely afternoon for golf!

At around 5pm some ‘new’ AirBnB-ers checked into the Dickeys’ place. Graeme came around to invite us to join Robyn and him and the new guests, Paul and Rebecca — New Zealanders from Mount Maunganui who are staying here for 3 nights — for a drink on their patio. So we did. And we had a very interesting hour visiting with them. Paul is a retired professional rugby coach, Rebecca just sold a very successful photography business. We talked about golf, New Zealand, Donald Trump, and beaches and bike rides.

Sue made (another) great supper. When we were done we heard the cruise ship sound its horn — time for all the ‘hippos’ (that’s what Paul and Rebecca call the mostly fat old Americans who come of the cruise ships for a whirlwind bus tour of the port of call) to get back on the boat. So we hopped into our car and scooted out behind our place and up the hill to Bluff Lookout. Just in time to see the tugboats pull away from the ship as it sailed out to sea. Off to the next trinket stop along the New Zealand coast. 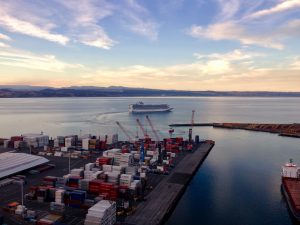 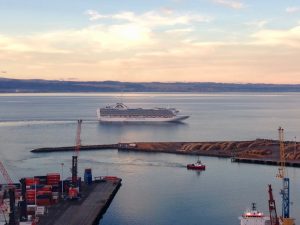 Back at the apartment, I wrote my journal and Sue read her book. She’s in a hurry to finish it since she picked up two new books from Robyn’s library and they look way more interesting than the book she’s reading now.

And then some more of “The Crown” on Netflix before going to bed.