This morning, after breakfast, we decided to take a Walking Tour of Napier. We walked into the town centre, to the Art Deco Centre, and bought our tickets for the 10:00 walk. It was another hot day today — up to 33 degrees, although the sea breeze made it a little more comfortable. Our tour guide was an elderly woman who volunteered for the Art Deco Society. She was quite a good tour guide. She made regular stops along the walk, usually in the shade of a tall building, to give short but informative talks about the history of Napier and what was special about the building we were looking at. 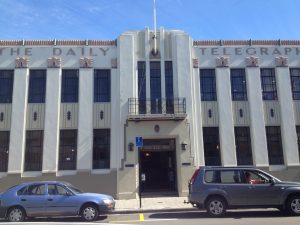 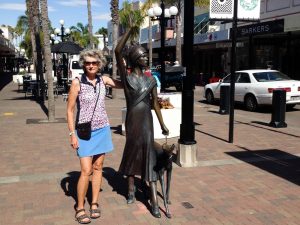 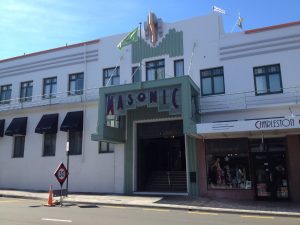 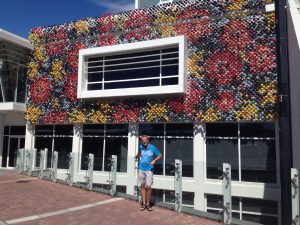 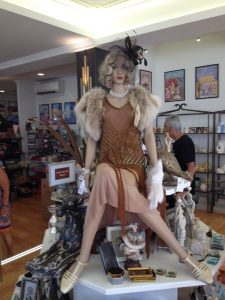 The walk was about one hour, followed by a 20-minute film about the February 3, 1931 earthquake that destroyed Napier. It’s because of that earthquake that Napier became one of the world’s “newest cities”, since everything had to be rebuilt. And the style at the time was ‘art deco’, so much of the architecture used for the rebuilding was in the art deco style. In fact, in the last number of years, Napier has made ‘art deco’ a big deal — and celebrates it every year, where, for a week, EVERYTHING is art deco. People dress up in period costumes, lots of old restored cars are on the road, theatres put on old plays and show old 1930s movies, lots of Cole Porter tunes and jazz bands, etc. People come from all over New Zealand to celebrate ‘art deco’ week.

Sue and I walked back home after the tour. Sue made lunch and then read for a while. We were hoping to go golfing at the Hastings course this afternoon, but Sue’s iPad called for 100% chance of rain at 3pm, and at 4pm, and at 5pm. Well, why don’t we see if that weatherman knows anything. We packed our rain jackets into the car and left for Hastings at 2:30.

We were welcomed at the club — they were having their ‘Tuesday Night’ special event. So could we golf 9 holes? Sure, do you want to golf the front nine or the back nine? How about wherever we can get on right away — before it rains? So we started on hole number ten. 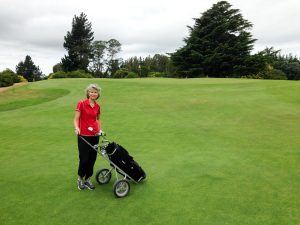 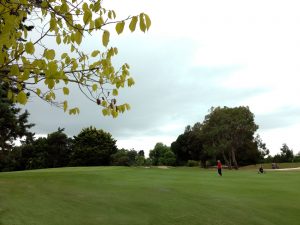 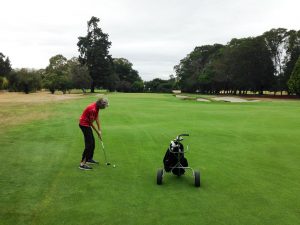 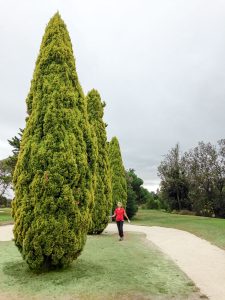 Another fine golf course. It’s been so dry for so long here, that ALL the golf courses have very dry fairways. But at the Hastings course they actually had fairly nice mostly-green fairways. And we had a lot of fun golfing — mostly on our own without people ahead or behind, until we caught up with a group on the second last hole. By that time whatever ‘good score’ we’d been aiming for was gone too. But that’s golf. But we were not the only ones who weren’t shooting a hundred percent! It was a good thing we’d not paid too much attention to the weather app. Not a drop of rain.

It wasn’t until we were almost home when a bit of rain began to fall. We got home, had happy hour out on the deck. A little more rain. We went inside and Sue made supper. Now were getting some real showers.

After supper we watched the last 2 episodes of “The Crown” on Netflix. And for most of those two hours it was POURING rain outside! The farmers and the golf courses will be happy for this — now all the fairways should be green again.

We watched CBC National and then it was time for bed.