Made some nice coffees again this morning. I got the new Van Morrison (Duets) album and we listened to that on our ‘stereo’. After breakfast Sue and I went for a long walk. I mean L-O-N-G. Through some of the neighbourhoods out behind our place where we’ve rarely, if ever, been before. We got back to the house at noon — just in time for lunch.

Sue read outside for a while, then came inside because “it’s too hot in the sun and too cool in the shade.” Day one of the Arnold Palmer Invitational golf tournament in Florida was on the Golf Channel all afternoon. At around 2pm I went to the driving range again. I had a great time. I used to hate the driving range; thought it was a complete waste of time. Now I can easily spend an hour and even two hours there — just hitting the ball. I could have hit my driver all afternoon, but I also worked on my #4 hybrid, and it felt like I made some progress there. Then I went to the chipping green and practiced short shots with my lob wedge. When I got back to the house Sue was sitting there, all ready to go. Yikes! I’m almost late! 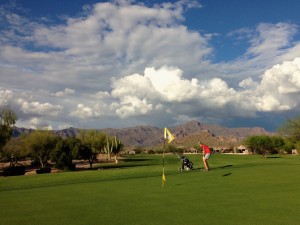 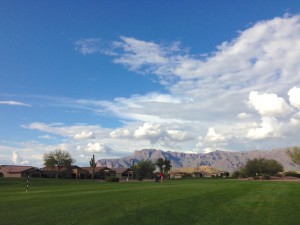 We got to Mountain Brook, hoping we might once again get to play the back nine. No, not today. The course is too busy. Okay, we’ll just play the front nine then. There were two ladies ahead — they were okay golfers, but they had to wait for the foursome ahead of them. So we waited at most tees. And we played ‘okay’ — but only ‘okay’. But we had fun. And the day was fantastic. We again had a little FaceTime call from Max while we were waiting to tee off at the fifth hole. Cool.

Back at home, we had a delicious supper after G&Ts on the patio (what else is new?). And at around 7:30 we were all set to see what’s on TV tonight. We started one of the movies on my Netflix list — but soon realized we’d seen that movie before. So we switched to one of the series on the list — “Hinterland”, an English mini-series. We watched the first of 4 parts. We need popcorn to help us stay awake for the 90 minutes. When the episode was over we switched to CBC The National and the At Issue panel. Tired, we went to bed.