I don’t know what’s wrong with me — I just can’t seem to get into the proper timezone. Every evening I fall asleep watching TV on the couch until Sue sends me to bed, and then in the morning I wake up just before 6 and I’m wide awake, ready for the day. Why can’t I just shift everything ahead by a couple of hours? Ah, but then my 11:30am lunch would only get to the table at 1:30pm, and that would be disaster!

I worked on my web project all morning. Sue gave up on her book and has now downloaded a new one to her Kindle. It was a warm sunny day again — good day for golfing. We went to hit some balls on the driving range at Gold Canyon and met Dave D. there. The three of us teed off (the boys played from the blue tees because we’re so good!) at 1:17pm. It sure was a busy day at the course today. By the 5th hole the guy behind us asked to join us. He was hitting from the gold tees, way back behind us. He said his drives were around 330 yards, that his longest was 377! I impressed him when I birdied hole #5, chipping my second shot to within 3 feet of the pin! Too bad I couldn’t keep that up! I held it together okay for the front nine (45) but fell apart on the back nine, ending up with a 99. (Sue, on the other hand, continued to play well, getting a birdie 3 on the second last hole!) It was slow-going; we were waiting for the groups ahead of us on every hole. We barely finished before dusk. 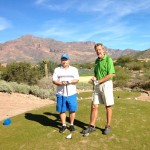 Dave and I ready to tee off on Hole #1 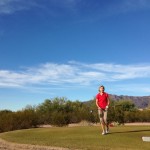 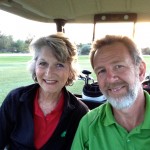 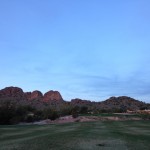 Getting dark at the final hole.

After G&Ts, Sue made delicious chicken stir-fry for supper. We thought we’d watch a couple more ‘Suits’ episodes, but Sue ended up on the phone with Alex for a while, and after that we watched the CBC News at 8. Big story today: Paris Newspaper Shooting — 12 Dead. Crazy. We watched John Stewart after the news and then Sue went to bed while I spent another hour working on my project.