Crepes and bacon for breakfast — so it was a special day right from the start. We watched our Sunday morning shows and then Sue went outside to read while I played on the computer. After lunch I took a few clubs to the driving range while Sue went to the pool to read. I called Mountain Brook to see if there was a chance for us to go golfing. Yep, come just before 3 o’clock. So that’s what we did.

The group ahead of us were beginners and we had to wait for them for the first couple of holes — but then they ‘skipped’ a hole and after that we moved along at a nice pace. We finished by 5 o’clock. 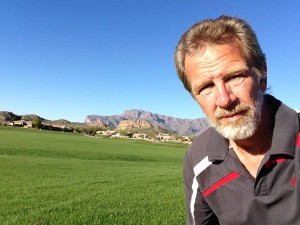 Back at home we had ‘fake crab’ and crackers with our G&Ts (well, I had crab; Sue won’t eat that). Sue made a great stir-fry for supper. I watched 60 Minutes while Sue talked on the phone with Alex. Then we made one last attempt to make it through the 3-hour movie “Inherent Vice”. Sue gave up and went to the bedroom to watch another episode of “Downton Abbey”. I persevered, although in the end I had no idea what it was all about. At 10pm we switched to The National, followed by The Fifth Estate. Then, to bed.