I got up at 7:00, Sue at 8:00. I made coffee and then Alex and Max skyped us. The first thing he asked when Sue answered was, “Where’s Farmer Ed?” (The last time we skyped Ed and Dave were here after our golf game, and I guess it made quite an impression on Max that ‘Farmer Ed’ was here with us in Phoenix!) I gave Max a virtual ‘tour’ around the house, and he showed us how he can ride his strider bike downstairs. After we said goodbye, Sue made bacon and eggs for breakfast. Because of our ‘day off’ from the exercise regime yesterday, my personal trainer had something special lined up for us today. A Gold Canyon ‘Duathlon’: a bike ride on either side of a mountain hike. We were just about to leave when Sue noticed her front tire was flat. So I had to get out my toolkit and patch the tube. That delayed the official start time by about half an hour. 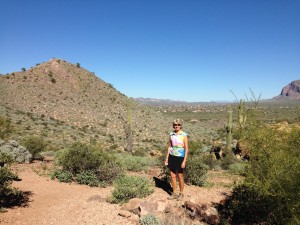 We finally got on our bikes and headed out around ‘our loop’. Just as we were coming down the big hill a big black truck whizzed by, and the occupants shouted some naughty words at us. Too bad for them there were a number of cars ahead of them and they were all stopping at the stop sign at the next intersection. That gave me a chance to catch up to the truck and pull up beside. The driver did his best to crowd the curb, but by now I was staring at him through the passenger door window. “You got something to say to me?” He rolls down the window, answers that he has no idea what I’m talking about. I encouraged him to be nice to people, to drive carefully when daddy let’s him take the family car out for a spin on a glorious Saturday morning. By now the young juvenile passenger in the truck is bending over and covering his face with embarrassment. And then the traffic ahead clears and they’re off. So are we. We cycle up to one of the trail heads, park our bikes on the road, and start our hike up Silly Mountain. 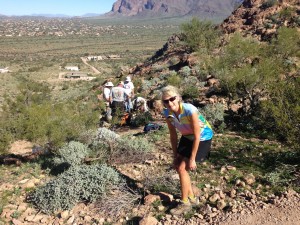 There were quite a few other people who thought a morning hike might be a good idea today. We trudged up the rocky pathway until we reached the main trail. Halfway through the hike there were a number of volunteers building a footing and mixing cement for the pad for a park bench. Once that’s done, we’ll be able to sit down and rest and gaze out across the valley, all the way to Mesa. Nice.

When we got back to our bikes we took the gravel trail over a hill into Mountain Brook. Quite a few garage sales and open houses in the neighbourhood this morning. Lots of people out and about. Highway 60 is a parade of cars heading east to the Renaissance Festival which takes place just about 3 miles from Gold Canyon and will take place every weekend from now until the end of March.

Back home, we changed into golf shirts and went across the road to the driving range. Both of us. And we hit balls for about 45 minutes. Then we came back to the house and had a late lunch. Then, for about an hour, I diddled around with the satellite dish in our backyard, trying to recalibrate it. Some of the channels we used to get now report ‘Receiver has lost satellite signal’. So while Sue stood by the patio door, watching the TV signal meter and shouting the numbers out to me, I was in the corner of the backyard, turning and tightening and loosening that dish. In the end we were lucky to get back to where we started. Oh well. We showered and changed. It was time for us to hurry out for our afternoon matinee. We arrived at the Harkins 25 at Superstition Springs just in time for the 3 o’clock showing of “A Most Violent Year”. Nice. Sue reserved seats while I got popcorn. The movie was excellent. Great story, good performance. And a nice way to get out of the heat for 2 hours.

After the movie we zipped around the block to the Costco on Sossaman Road. We picked up coffee, wine, beer, and pork tenderloin — the necessities of life. That’s how we roll. Grabbed a hotdog and slice of pizza on the way out and headed for home. That sure is a LONG string of headlights coming back into Phoenix from the Renaissance Festival! I sure am glad we’re heading in the opposite direction.

Back at the house Sue put away the groceries. Then at around 7:30 it was time for us to get back to our stations to see to see how many episodes of ‘Suits’ we could stay awake for. Answer: three.