Saturday morning: bacon & eggs. I did a bit of computer work in the morning. Max and Alex skyped. Sandwiches for lunch. And now we get to the good part: 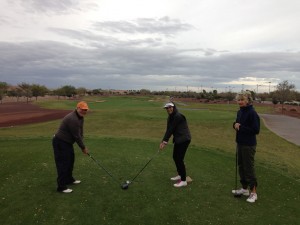 We left for our 2:15 tee time at Poston Butte Golf Course (down in Florence) a bit before one o’clock, thinking we’d probably be caught in the traffic between our place and the Renaissance Festival south on Hwy 60. But no, no delays at all. I guess the cooler (17 degrees) weather and the clouds (that looked like they might rain on us) scared off the hundreds of visitors that clog up our highway most weekends. So we actually arrived at the golf course about half an hour early. No problem. We’ll go putt a bit and drive a few balls on the driving range, and then tee off a bit early (because some golfers may not show up due to the weather). And even though we had about 17 drops of rain on our windshield on the way down, that was it for the rain today. Though the temperature wasn’t really at all cold, the wind was blowing pretty hard and made it feel cooler than it was. 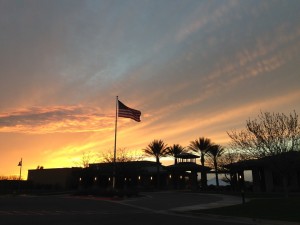 After shooting my tee shot on hole #1 left onto the driving range, most of my subsequent drives were much better. I managed to score a 44 on the front nine, with 3 pars. Not bad for a windy day like today. Ed and Jessie both played well too, while Sue had a few issues with the big sand traps. My pars changed to bogeys on the back nine, and I finished the day with a 92 (to Ed’s 90). The wind died down quite a bit and on the final hole the sun came out and lit up the 18th green. Not that I was ON the green. No, sadly I was in the bunker and was lucky to shoot another bogey on the final par 5. Sue also redeemed what had been a less than stellar day golf-wise, and shot a TWO on the 17th hole, which is an island green! All-in-all it had been a very good day, considering that all week the forecast had been for rain and cold. We’d had to wait for the groups ahead of us at every tee box, so although we’d played a fairly steady pace, we finished our game 4 and a quarter hours after our 2:15 start. The sun was down. We drove the 30 miles back to our house in the dark.

Sue warmed up the leftovers (Chinese and pasta) for supper. We played a few hands of bridge, and (for a change) the ladies won most of the hands tonight. The guys tried to mount a comeback, but fell a bit short when we called it a night at around 10 o’clock. The Hildebrands watched the final ends of a dramatic curling game on TSN and then we switched to the news. Everyone was in bed by eleven.