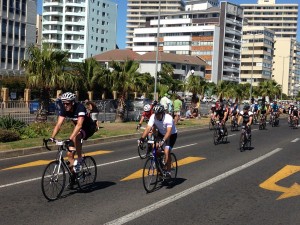 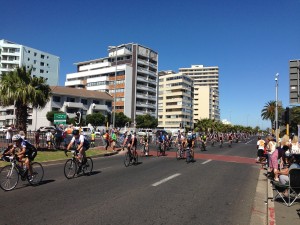 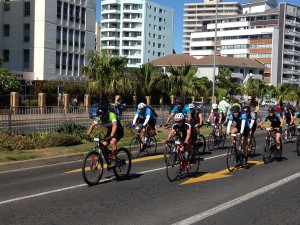 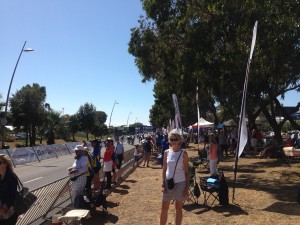 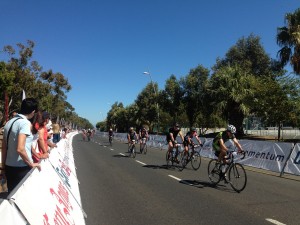 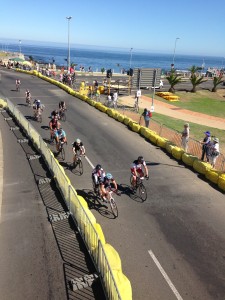 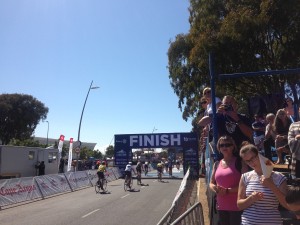 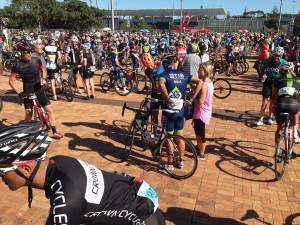 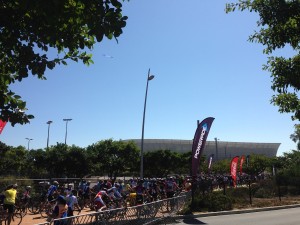 When we got up this morning the first of about 35,000 cyclists were at the start line in downtown Cape Town. It was a perfect morning — sunny, little wind, not too hot, not too cold. With that number of cyclists, it would take until just before noon when the FINAL group would be setting off for this 109km race around the cape. All morning, from just after dawn until after we’d had our bacon and eggs and headed out to the stadium, we saw thousands of cyclists, all dressed in cycling gear riding towards the city centre (start line).

We went across the road at around 9:30 and the area around the finish line, near the stadium, was already packed with cyclists who had completed the race. These were the ‘fast’ riders — who rode the loop in just over 2-and-a-half hours! The fastest woman in the race finished in 2:51. Many racers were part of a team, and those teams were now enjoying refreshments at their sponsor’s tents which were set up along the route in Green Point Park and along the road in Sea Point. And fans stood on either side of the road and cheered as the cyclists were finishing their last kilometre.

While it is the largest timed race in the world, not all 35,000 participants were ‘racers’. No, we saw lots of mountain bikes, even some fat-tire bikes, and quite a few tandems. It was a great day for a race. There were lots of friends and families and fans supporting the cyclists. It was a remarkable undertaking, well organized and well run. It’s incredible that a city like Cape Town will shut down major routes leading into and through the city for the better part of a weekend in order to make an event like this possible.

We had lunch at home, spent the afternoon reading and computing. We went to Hudson’s and had hamburgers for supper. We FaceTimed with the kids when we got home. Then we watched a bit of Netflix and went to bed at just before 1:00am. We have an early tee time tomorrow morning, but right now the wind is blowing pretty good and Sue says the forecast is for rain tomorrow; but we’ll see about that in the morning.