After sitting at my computer in the early morning darkness for about an hour, I got up to open the blinds. What kind of day will it be? Looks cloudy — almost like it might rain! I suggested that possibility to Sue, who was busy checking her weather apps on her iPad. Last night when I called my parents my dad asked me a few times how the weather was — and I told him that really the weather is ALWAYS nice! I told him that we never have to first check the weather before deciding on if we should go for a walk, or a bike ride, or golfing. It’s just always nice. In spite of that, Sue still checks her weather app a couple times a day and reports her findings. Today Yahoo tells her there’s a 30% chance of showers at around 3:00 in the afternoon.

Since we hadn’t been to the gym (we have a free membership at the Silly Mountain gym) for nearly a week, we decided to do a quick one-hour hike, stop at the grocery store to pick up a few things, and be back home in time for lunch. 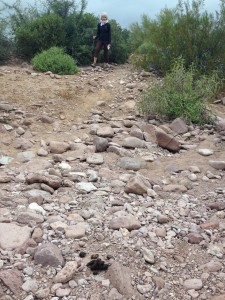 We parked the van on Bashas’ parking lot and set out on our hike to the mountain. Still cloudy, but nice temperature. We crossed a dried-out creek bed where I noticed fresh turds. Can’t be dog do-do — people here who have pets (and that means EVERYBODY except us) walk around with one or two of those little blue pooper-scooper bags in their hands. I’d seen a big coyote (or maybe it was a wolf!) slowly ambling by the wall in our back yard yesterday morning. Maybe we’d see some wild animals out here on our walk today! 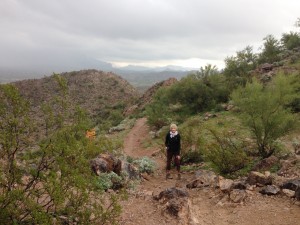 We were nearly at the top of the hill when we had a few splashes of rain on our face. Huh? We started down one of the trails. The rain came harder. I thought it wasn’t supposed to rain? I took out my iPhone just to check — yep, there were lots of big drops splashing on the screen. That proves it: it’s raining. We got soaked. So much for all my bragging to Dad last night!

An hour later we were back at Bashas. I sat in the van while Sue, looking like a wet rat, went in to pick up groceries. I guess we’re not going to the driving range today. I pulled the van up to the front entrance so Sue could escape the downpour.

After lunch I worked on my website. Sue read her book, “The Finkler Question”, on the Kindle. We left around 3:30 to go see a movie at the Harkins at Superstition Springs. “Wild”, starring Reese Witherspoon. Now THAT is a good movie! Sure, it’s just about a long hike, but I think it’s cool how the director can make a story like that into a film. Good acting, good music, good story-telling. At one point in the movie the woman encounters a rattlesnake — and just at that moment my phone starts vibrating in my pocket. I jumped! Sue returned Alex’s call in the van on the way home. Just calling to chat.

While Sue was frying up the fish she’d bought at Bashas today, I turned on the TV. A new sitcom by Eugene Levy was premiering on CBC. Schitt’s Creek. Really? They can name a TV show that? I watched the first of the two episodes they were airing. Hmmm… More ‘Schitt’ than ‘Creek’. But maybe I was too hard on it, after the movie we’d just seen. Anyway, we enjoyed our supper and then watched THREE episodes of ‘Suits’ before going to bed.