After several days and evenings enjoying the bars and bands in Nashville, on Thursday morning it was time to begin the bike ride. We drove the van down to the official start (or end, if you’re starting in Natchez) of the parkway. Mile 444 was near the “Loveless Motel”. We parked the van and went in for breakfast. A busy place! Then we took 3 of the bikes out of the van and ‘assembled’ them. We stopped for a photo beneath the motel sign and we were off.

Walter would take the first shift driving the ‘sag wagon’. We arranged that one of us would drive the van for half the day, usually about 25 miles. That would be our lunch stop, and then another person would drive the second half of the day.

The weather was great! While it had been 34 degrees or even hotter the previous week, our cycling days were about 23 degrees. Great for cycling. And the roads were in excellent condition. Winds were light, and on a few days there was a gentle breeze at our back, helping us along. 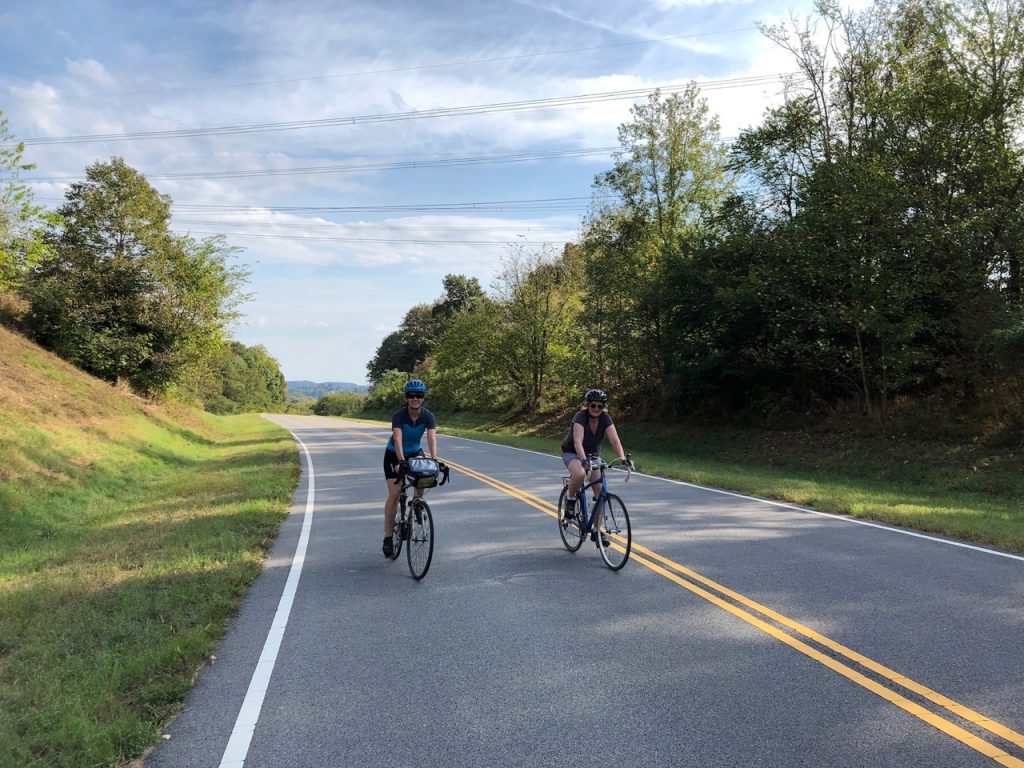 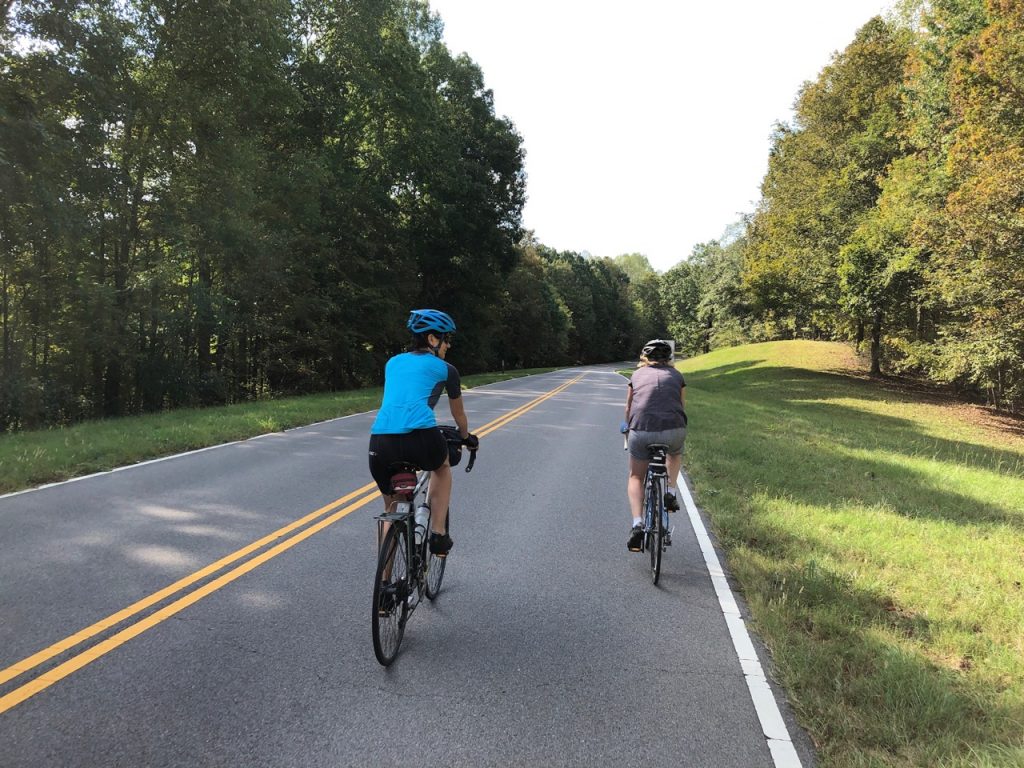 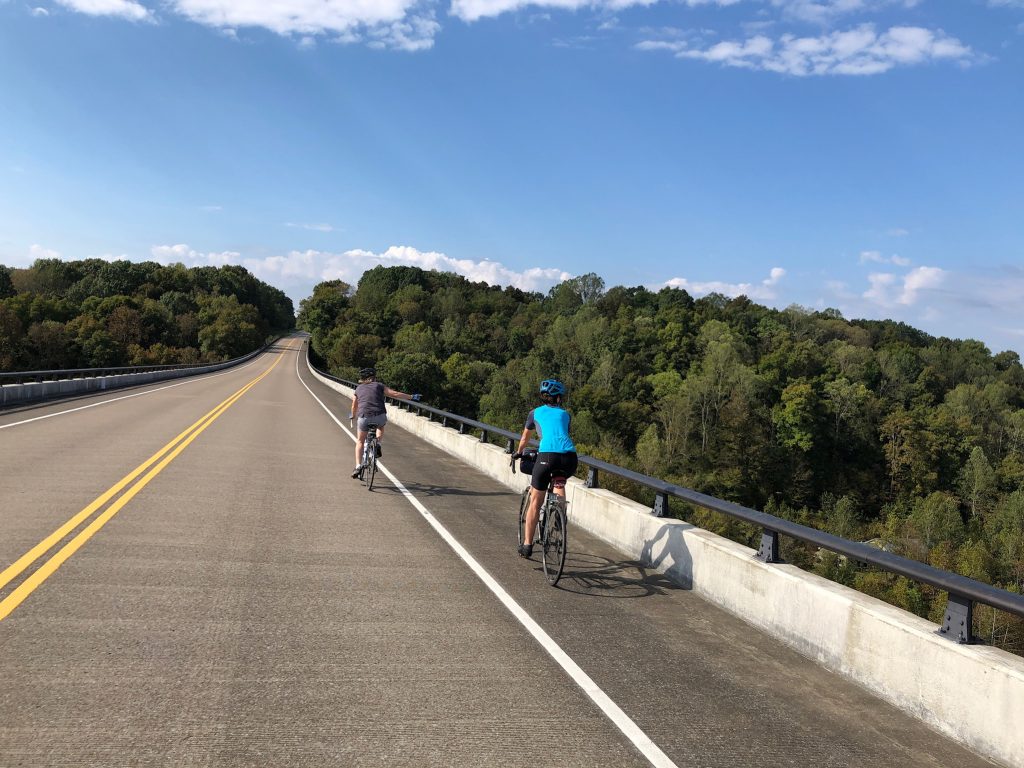 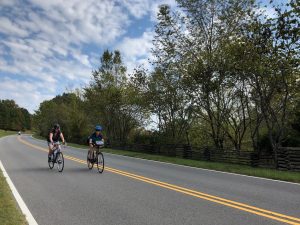 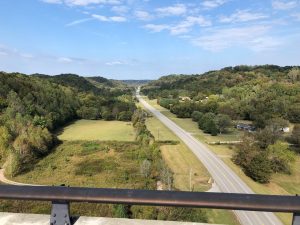 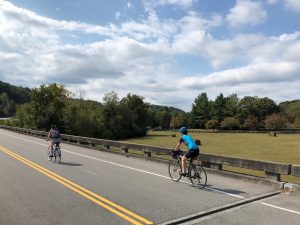 We encountered several armadillos and turtles beside the road. 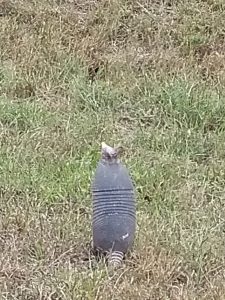 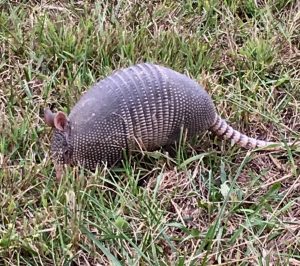 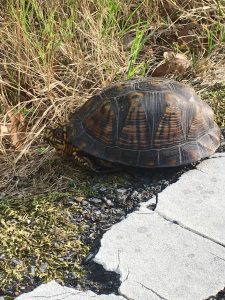 Along the road there were signs indicating points of interest along the way. We stopped to check out this small creek. 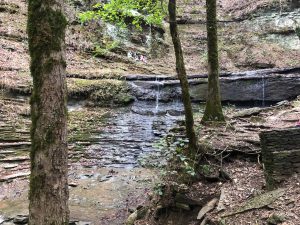 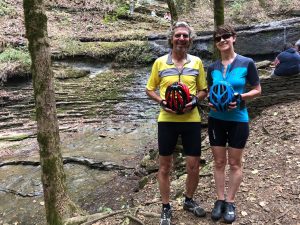 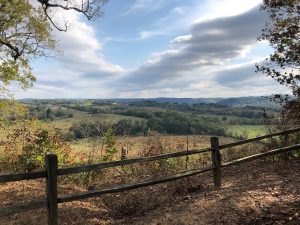 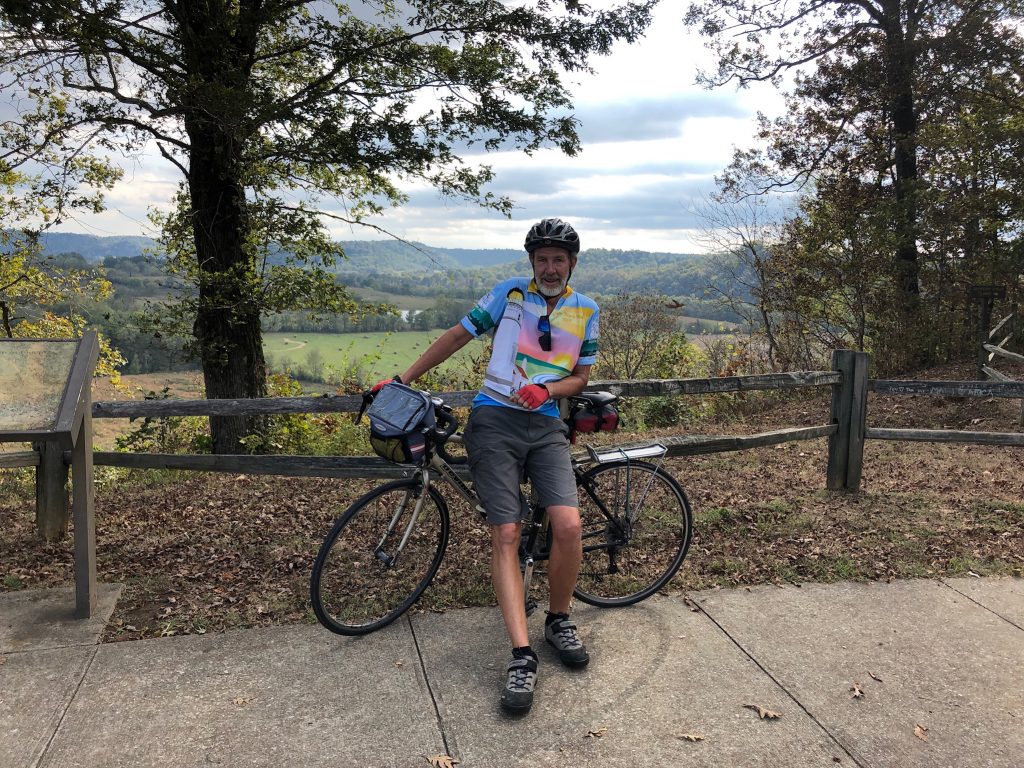 I had hoped that we might see the fall colours in October, but it appeared that this year fall would come in November. Nevertheless, the scenery along our route was great. There were regular roadside pull-outs, some with picnic tables, some with washrooms. And there were attractions along the way, usually not too off the main route. 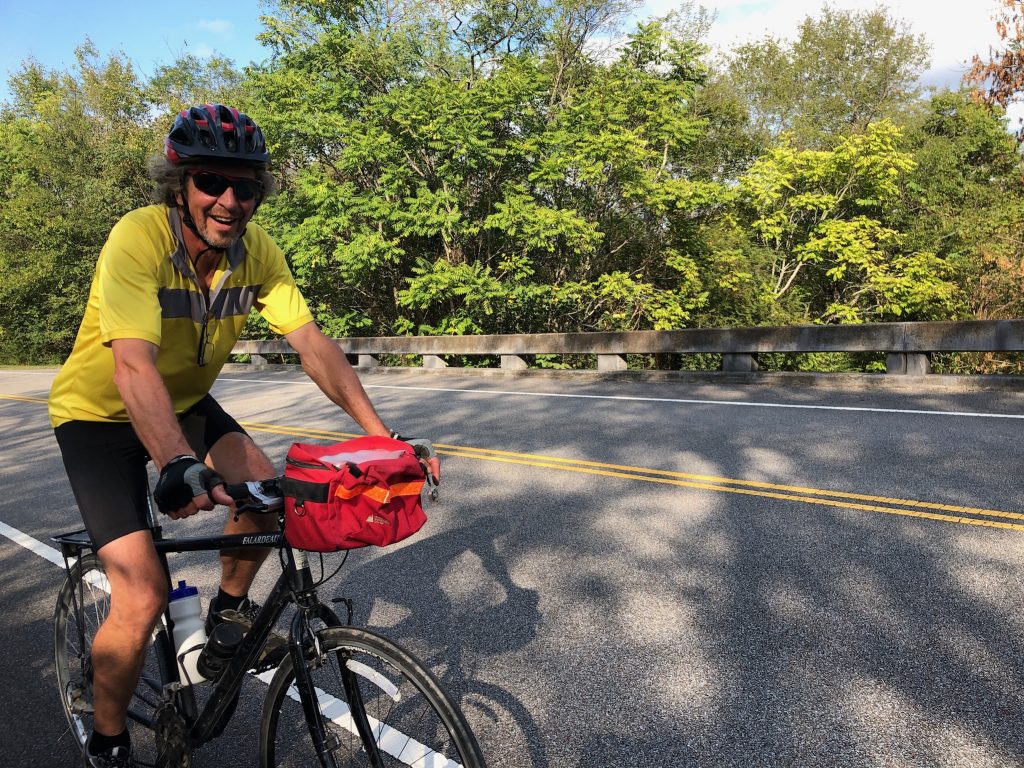 At the end of our first day of cycling we arrived at the Fall Hollow Campground. This was the only lodging we had booked ahead of time for the entire cycling trip. It turned out to be quite a disappointment — our “bed and breakfast” turned out to be more like a large wooden ‘garden shed’. The bathrooms were in a nearby building, with codes that got us in, but no towels or shampoo or soap. And the tiny building had a small fridge, a microwave, a bunk bed and a “loft” bed squeezed in just above the entrance door. 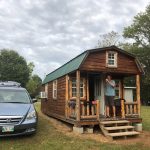 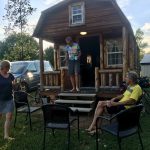 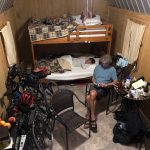 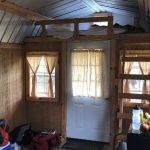 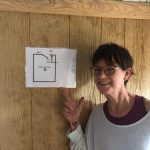 The next day we continued down the road to the Alabama border. By now we had a bit of a routine: We would cycle for 4 or 5 miles and if there was a bridge with the standard concrete ‘rail’ we might stop, just to give our butts a rest and have a drink of water (or gatorade). After 25 miles or so it was time for lunch. On this day Angie took her turn driving the van after lunch. It fell to her to find us a place to stay for night, which turned out to be the exact opposite experience from what we’d had the night before. The 355 Motel in Collinwood was large and well appointed. It was more like an apartment on the second floor above a business, with a kitchen, a couple of bathrooms, and a large living and dining room. We were very happy, especially when moments after we had arrived and carried our bikes up to the big covered veranda in front of the apartment it started pouring rain. Serendipity! 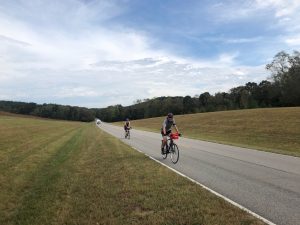 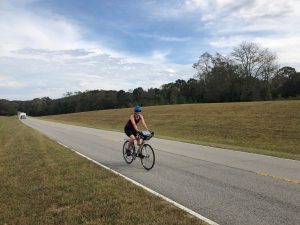 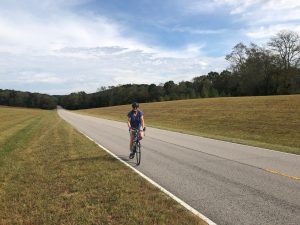 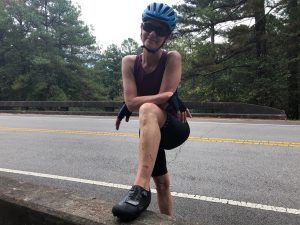 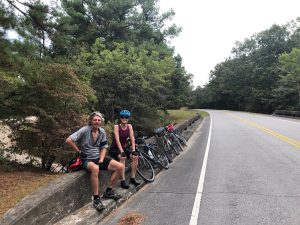 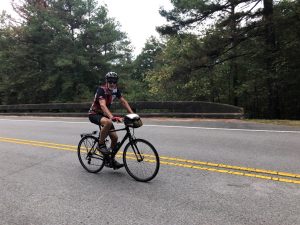 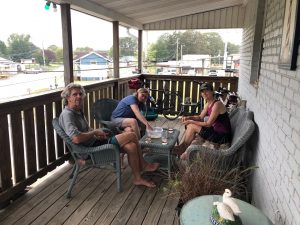 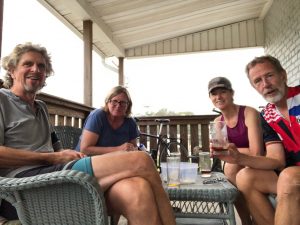 The next morning, after a hearty homemade breakfast and with the sun shining and not a cloud in the sky, we set off. It was only a few miles until we crossed the state line from Tennessee into Alabama. The Natchez Trace cuts through the northwest corner of Alabama so it didn’t take us long to ‘cross’ Alabama into Mississippi.

Because there were no lodging options near our stopping point for the day (at Tishomingo State Park in the foothills of the Appalachian Mountains, just across the Alabama-Mississippi state line), we loaded up our bikes and drove the van back east into Alabama, to the city of Muscle Shoals where we checked in at the Red Roof Inn. We hoped we might tour one or both of the famous Muscle Shoals recording studios the next morning, but both were closed and so we had to settle for photos before heading back to the State Park and continuing our cycling journey. 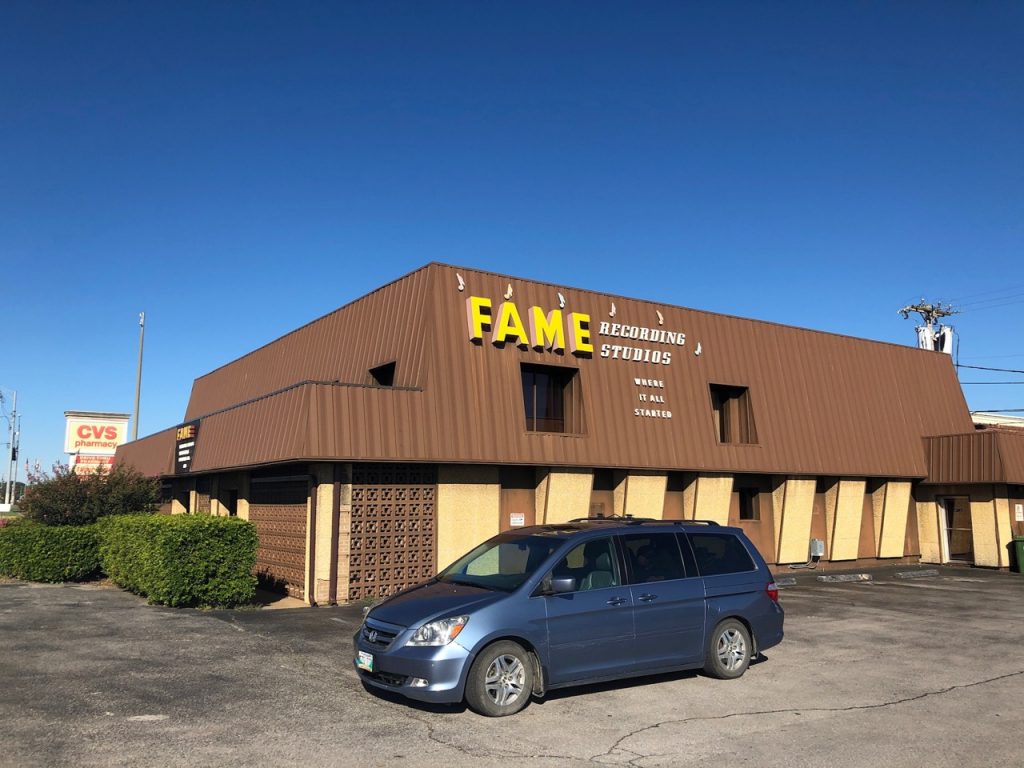 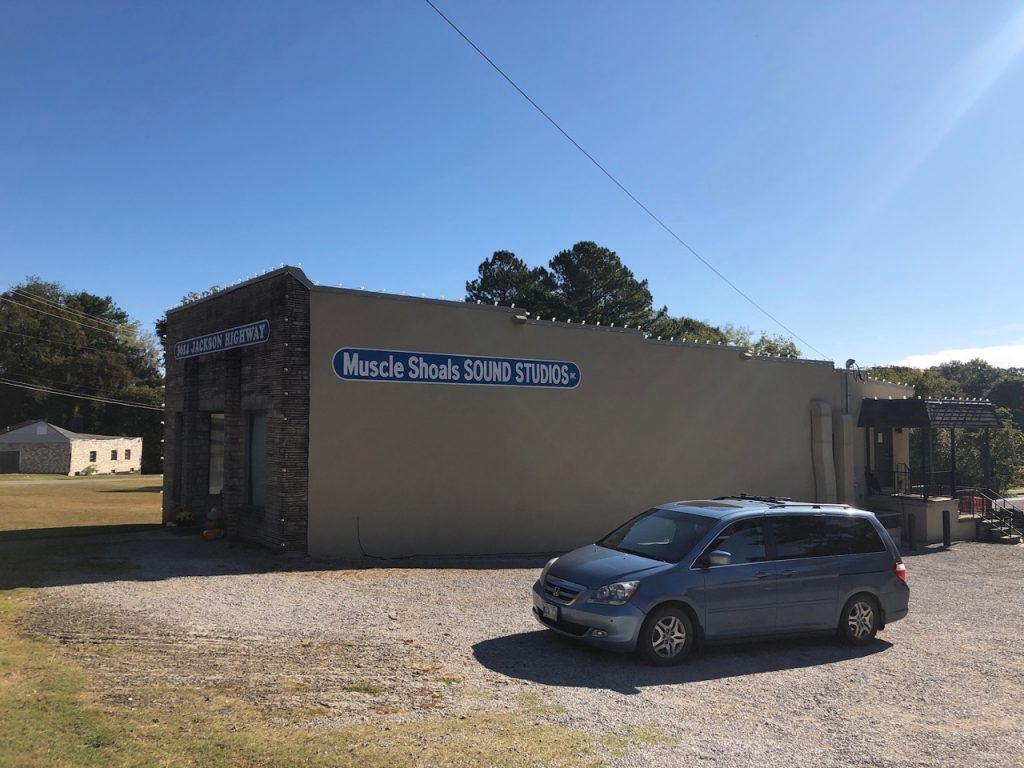