Another Sunday. Another NFL day at GC.

We got things started with a ‘telephone’ call from Max — on his toy phone. He’d just had pancakes for breakfast and he told me he was looking forward to flying to Phoenix in a big airplane and Opa and Oma would pick them up at the airport. But first they would have to wait for their suitcases. Well, Opa and Oma sure are looking forward to that day too.

We watched our Sunday morning shows and followed that up with a pretty nice breakfast of our own — French toast with peanut butter and fruit and bacon! 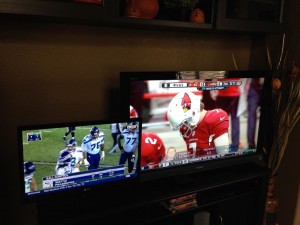 Sue read outside in the afternoon. I diddled around, putting on our putting green and doing an hour’s worth of work for Koop. I didn’t really watch the 11:00 NFL games; we didn’t get the Vikings or the Giants on our channels, and I didn’t really care about Indianapolis game. I was more interested in the late afternoon games. In fact, I really wanted to watch TWO games — the Arizona/Chiefs game and the Seahawks/Eagles game. So I set up the bedroom TV next to the living room one and watched both! And when I saw that the Giants had blown away the Titans and the Vikings beat the Jets in overtime I thought this could be a big ‘turnaround’ day for me — for a change the teams I cheered for WON! Well, not quite. The Cardinals won, but so did the Seahawks. And then, after we’d watched 60 minutes and ate half of the pizza Sue picked up from the Hitching Post, we watched the Patriots beat the Chargers. I guess I expected that.

After the football games were over we watched the CBC News and ate some homemade crackerjack popcorn. And went to bed.