Woke up at 5 again. I made my coffee and checked my email. I always do that — although I NEVER have email waiting for me in the morning. Except today. Someone named ‘naughtygirl’ wants to get physical with me. What!? How did that get through?

We watch our Sunday morning shows although (once again) Fareed on CNN is pre-empted for coverage of the big anti-terror march in Paris. Two big play-off NFL games on today. Before the first one starts at 11am Sue and I go for a morning walk — all the way to Mountain Brook clubhouse and back. A bit cloudy, but nice temperature. Lots of geezers pass us in their big shiny cars, either going to or coming back from church (there are 4 big churches within walking distance of our place). Friendly waves. The clubhouse restaurant and the Hitching Post parking lots are packed too — Sunday brunch. When we get back I take my new driver and cycle across the road to the driving range. I’m going to see if I can ‘adjust’ some of the adjustable settings on it to keep it from slicing. Which I do. And after whacking balls until my back is sore, I’m satisfied that I can hit the ball straight and far at will. Can’t wait to take this baby out on the course.

Back at the cabin I find Sue watching some infomercial — and NOT the Cowboys/Packers game. I’d missed the first quarter — and what’s this? The Cowboys are out-playing and out-scoring Green Bay. It’s actually a pretty good game — which Green Bay ultimately wins after trailing all game. Next up: Colts at Denver. 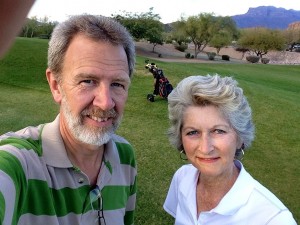 Sue and I skip the first half of the second game and drive back to Mountain Brook to walk the front nine at 3 o’clock. I gotta try out that driver for real. We are rushed out on the course ahead of a ‘big group’. That’s good. First shot: straight up and down. Huh? At least my new rescue club gets the ball close to the green from there. Bogey. Second hole is short; no chance to use the driver. On the third hole my drive barely clears the wash. This sucks! What happened? We both end up with a score of 50. I don’t need new clubs to do that!

We finished nine holes in record time and are home around 4:30. The third quarter of the Colts/Broncos game has just started. And look at this! The Colts are beating the Denver. Easily. Sue picked up supper from the Great Wall. Delicious. All that club-swinging has me starved.

We watched 60 Minutes and then switched to the Golden Globes. Some nice ‘dresses’ on some of those movie stars! I’m just glad that I’m on this side of the TV; I wouldn’t know where to look if I had to stand next to them on the stage. Like one of the presenters said, I get why they call it the ‘Golden Globes’!

We switched to PBS to watch the second episode of this season’s Downton Abbey. Hmmm… Seems like not much is happening in that series this year — Boring. Back to the Golden Globes. We managed to stay up late enough to have ice cream ‘night snack’ while we watched a Fifth Estate documentary about Russia’s Putin. In bed by 10:30.