Went for our daily walk in the morning — Sue stopped at ‘our bank’ to put in a few more of those lousy Canadian dollars so we can keep on buy things with our American debit card. It was quite warm even though it was still early morning, and when I suggested we check out a ‘shortcut’ from the road, going over Vista Point hill by way of a ‘path’ that soon disappeared and left us picking our way over cacti and prickly bushes up one side and down the other — well, that only got us ‘warmer’.

Sue was on the phone for part of the morning — and I took a few clubs, including my new putter, across the road to the driving range. Man, everything just plain ‘works’ at the driving range, and I just can’t wait to head out to the golf course and make every shot. So, after lunch we did just that. Back out to Apache Creek, where we got on the course at around 2:40 for the $29 twilight rate. We joined a single, a guy from here in Mesa who could really hit the ball and was playing from the black tees. We had to wait for the group ahead at every tee, but I guess that’s just ‘par for the course’ at this time of year. And although I was playing ‘okay’, it wasn’t quite the same as I had envisioned it earlier on the driving range. But, as I keep saying (especially when my score isn’t very good), we were having fun. I finished the front nine with a 47. 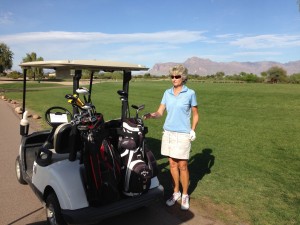 At the turn we were joined by one of the guys from the group behind us — the rest of his group had quit for the day. So now we were four. And we had a great time. This guy was from Alberta, had just retired and bought a home right here in Apache Junction, and really enjoyed playing golf. He maintained that although his game wasn’t what it used to be, in large part because of the damage years of playing almost pro hockey had done to his hips, he just loved to play golf. Over the years he’d been partnered up with many golfers and he had never met a golfer who wasn’t a good person. So here we were, golfing with one guy who was incredibly skilled at golf, and another who was an example of how to be gracious and positive even when the game wasn’t going that well. And, just because it is GOLF, I finished the back nine with an 8, a couple of 7s, and a final score of 99. BUT, I parred the final hole, and Sue shot a 43 on the back nine! And we had a marvellous afternoon. And we’ll go golfing again!

The sun was setting and we actually played the final two holes with the flags already taken away. We drove home and Sue got supper ready while I skyped with Ed P. After supper we were going to watch our shows, but got a little sidetracked by what was on TV. First, an ‘Independent Lens’ special on PBS, and then a CNN special. I guess all the sunshine and exercise caught up with me and I missed the conclusion of the CNN show. But I revived and watched a couple of late night talk shows over the noise of the dishwasher while I wrote my journal.