Another beautiful morning in Rancho Mirage. Sue got up at 6:30; I slept until 8:00. Got up and had a coffee before the ‘official’ Good Friday breakfast — French toast with icing sugar, peanut butter, strawberries, kiwis, bananas, and ALL the Aunt Jemima pancake syrup left in the bottle poured over the whole shebang. So now you know it’s a special day.

After breakfast Sue started gathering up our stuff from the cupboards — the packing has begun. Alex skyped to show us the marvellous Easter cake she baked to bring to the Nikkel gathering today at Walter and Angie’s. I took the pedals off our bikes and parked the bikes in the van, all ready for the trip home. Dave Driedger skyped too, and tried to convince us that it really is better in Manitoba.

But the whole day wasn’t just one long depressing packing day. No, Sue booked a tee time at the Oasis Country Club, and so we stopped all the packing and headed off for some golf at around 2 in the afternoon. When we got there we saw lots of people, lots of cars and golf carts, lots of celebrating people. I guess they had a big Good Friday celebration at the country club. Sue found some pretty nice Nike golf shoes in the clubhouse — and got 50% off, today only. So that was a good deal! 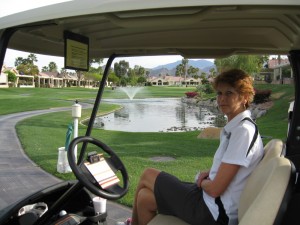 We were paired up with a couple of young golfers from L.A. who turned out to be very good golfers. I would take my trusty (3-wood) driver and tee off from the whites, occasionally getting it within 100 yards of the hole, while these two jokers would take an 8-iron from the back tees and blast it onto the green! And once on the green, they’d line up their 30-foot putts and roll the ball into the hole, while my game was TOTAL SHIT! Really! It was MISERABLE! On hole number one I shot my first shot into the fountain. Too far to retrieve it. Took a second ball. Plunked it into the same spot in the fountain. Third ball. Over the green. Meanwhile Sue pars the hole. The two schlengels par the hole. You know, what really pisses me off is that my friend Robert Dyck shot his best game ever on his birthday. Well, this is our LAST golf game this winter (probably until some time in JUNE!) and tomorrow’s my birthday — and golf gods are being mean to me.

Oh well, any day on the golf course is better than a day shoveling the driveway. And each hole is a new game. Not today. By the end of nine holes I was totally defeated. Ready to call it quits and go home. 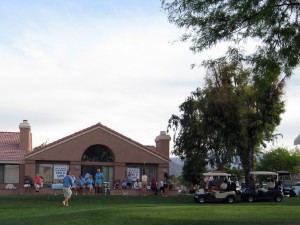 But the weather was perfect and the course was beautiful, and I’m too old to whine. And I played much better on the back nine. In fact, at about hole number 15 there was a big gallery of neighbours, drinking and laughing and being very noise, who welcomed each golf party when they rolled up to the tee blocks, cheering like the fans at the TPC Scottsdale’s 16th hole. One guy had a big ‘QUIET’ sign which he held up as we prepared to tee off — and then he yelled, “Quiet! We’re trying to have a party here!” As unnerving as it was to have to tee off in front of the gallery, it made us laugh and relax and have a better time.

After finishing the final hole we drove back to the house. It was 7 o’clock. Time to tune into our comedy shows. Meanwhile, Sue started cooking up a storm in the kitchen, and in no time we were enjoying a hot and spicy shrimp and pasta dinner. Fantastic!

Tonight’s TV will include “Kitchen Nightmares”, “Shark Tank”, and “Rock Centre with Brian Williams”. Good times on a Friday at home with the Nikkels.