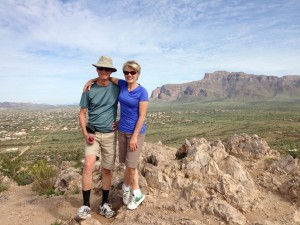 This morning Ed made us crepes for breakfast. That provided enough energy for us to hike Silly Mountain. Coincidentally, we were near the top when we ran into Ed & Val and the Foxes. We took a photo at the summit, planted a flag and claimed the land for our God and King, and then hiked back down the long way around. We got home at noon, just in time for lunch, which we had outside on the patio.

After lunch I went to the driving range for an hour. The girls went to the pool. Ed stayed home and finished watching the movie “Whiplash”. That’s where I found him when I got back from the driving range. When the girls came home we had G&Ts and watched another Oscar-nominated film, a documentary called “Finding Vivian Maier”. Okay. When that ended it was 5 o’clock — time to tune in the Jets game on TSN.

While Millie and I watched hockey, Ed took a little nap and Sue started supper. The Jets really weren’t ever in the game, but we waited until there were only a couple of minutes left and the score was 5-1 for the Capitals, before putting the chicken on the barbecue.

After supper we (finally!) got out the cards and the crib board. We sat at the table until 11pm, looking for scoring cards in Sue’s hand in order to help the girls add up enough points for them to win a couple of games. A little chocolate peanut butter ice cream and it was time for the CBC National and the ‘At Issue’ panel. That about did it for this Thursday.