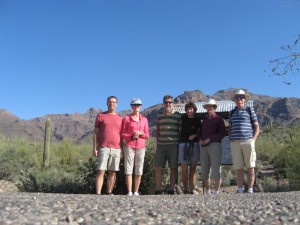 Thursday: Ed and Val and the Foxes picked us up at 10 and we headed out to the parking lot. Took a group photo and then off we were.
The day was just right; not too cold, not too hot. Once we got up there we took a couple more photos, including another ‘timer’ special where I didn’t quite make it up to the group in time for the camera ‘click’.
After lunch at home Sue and I hurried off to the IMAX cinema on Signal Butte — and watched two more ‘oscar-nominated’ films: first, “War Horse”, a 2.5 hour WWI movie which we thought was ‘okay’, not ‘great’; second: “The Descendants”, starring George Clooney, a movie we both really liked. 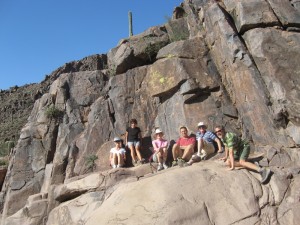 Filled up with gas on the way home. Got home at around 7pm, Sue quickly made a salad and we had spaghetti with meat sauce for supper. Then I called Ed and invited him and Val over for coffee. I watched the overtime win by the Jets and then Ed and Val were here. We got the latest updates from them, had a nice visit. Ed borrowed our van for going golfing tomorrow. We won’t be needing it because we are getting up early to pick up Dave and MaryLou from the Sky Harbor Airport.