After an early lunch we got into our air-conditioned van and headed west on Hwy 10 to the Desert Hills Premium Outlet mall, about half an hour from our place. It was already stinking hot outside and the forecast was for even hotter. We parked the van. As Sue made her way from store to store I did my best to find a bench in the shade along the way and watch people. I’d say that if it wasn’t for tourists from China and Asia, sales wouldn’t be 10% of what they are here — nearly every group of Asian tourists were carrying multiple bags from some of the high-end stores here. And after about 90 minutes Sue also had a shopping bag to carry back to the van. 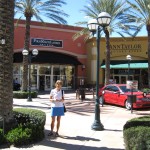 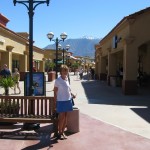 We stopped for an ice cream at McDonalds before heading back east to Desert Hot Springs. Along the way we again passed the valley of the windmills. Thousands of them. 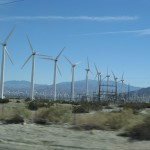 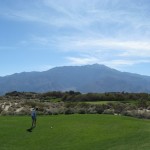 We’d booked a 3:00pm tee time at good old Desert Dunes — where twice before we’d been more or less blown around the course by the high winds. Although the winds were not a factor today, the 4:00pm temperature hit 97 degrees. And this is NOT an easy course. So once again, the first hole humbled us and more or less blew up any chance we had of finishing with a decent score. So let’s not mark that one. Let’s just have fun. Good idea, but even that didn’t last for long. By the seventh hole I was having a hard time keeping ‘Little Miss Grumpy’ from throwing her clubs into the desert. And although the thermometer read 97, it actually wasn’t too bad — lots of ice water to drink, shade in the golf cart, and a gentle breeze. 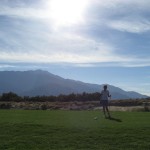 And because the game is called ‘golf’ there were several occasions when we had terrific shots, or chips, or putts. Usually not all three on one hole, but sort of scattered about. By 6:20 we had completed 18 holes and were back in the white bake-oven that is our van. Open the windows. Head out on the highway. Looking for adventure. And whatever comes our way. Next stop? A ‘restaurant’ that Sue said I should not name in my (public) journal. Let’s just say that it is a favorite of mine, and the name rhymes with ‘Back in the Jocks’. Ordered a bacon-double burger and one of those new ‘Hot Mess’ burgers. Hurried home.

Sue made a fruit salad — there, now this is a ‘healthy’ meal — and poured herself a glass of wine while I opened one of those nice german St Pauli Girl brews. Man, that’s good eatin’. After supper Sue called Arlene (in Phoenix). We watched some TV and listened to our hot water tank rumbling away in the garage until it was time to close up this day and start thinking about that first cup of fresh coffee that will usher in tomorrow.