Well, the title says it all. While I ate my bacon and eggs I noticed that the pool was just about full to overflowing! I called Teddy and he instructed me to turn the pool’s water tap off — he seemed to know what the problem was and presumably it’ll get repaired sometime soon. I Skyped with Koop for a while — he toured me around his office and kitchen renovations — and we talked about some web projects. After breakfast I cleaned the leaves out of the pool (apparently we had a big wind last night) and then spent most of the rest of the day on my iMac, trying to work through some SASS tutorials. Sue did some laundry and sat outside and read her new book. At one point in the afternoon Tim Snider skyped — so we got to meet Martina, who is 3 months old. Later we skyped with our kids — Max was looking as fine as ever, despite his cold. I was about to go light the barbecue when I noticed a missed Skype call from Ed Peters — so I called him back and we visited for a bit. 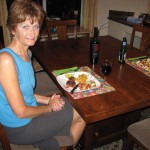 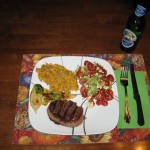 Then it was time to get supper going. Sue had trimmed the steaks and made rice and an avocado salad — so our supper was fantastic (as usual). We spent the evening watching some old reruns of Dateline and Restaurant Impossible. It’s been hot here now for 4 days in a row, but the temperature in our house stays comfortable — although today we had most of the ceiling fans going.