Made my usual breakfast — an aeropress coffee, raisin bran with yogurt and raspberries and blueberries and half a banana — and FaceTimed with my parents for a bit. I was playing my guitar and watching one of the morning shows on TV. They were talking about the new interviews that Monica Lewinsky was doing for a special 6-part A&E series that started last night. Ah, so THAT’S what I watched last night! I didn’t know it was a new series, but as I was flipping through the 1100 channels that I get on my TV, I ended up watching this 2-hour special about the Clinton years. And so I saw those interviews with ‘that woman, Miss Lewinsky’. I checked the online TV guide to find out more, and discovered that for the next 2 evenings there will be 2-hour continuations of the series. I found the A&E channel again and noted it for tonight.

It is cool in the morning, and probably even a bit cooler inside than out. At least from the way the  golfers outside my window are dressed, I’m sitting here with jeans on and they are in shorts. So I guess the thing to do is to get outside and go for a walk or a bike ride or a game of golf every morning. I put my walking sandals on and went for another long walk. I cut through the big country club to the west of ours, waiting until a car pulled up and the gate opened so I could walk through behind the car. I ended up at ‘The River’ mall in Rancho Mirage. I wandered around there for a while, before going into the theatre there to see another movie — “Bohemian Rhapsody”. A nice theatre. An okay movie. It’s exactly “my era” as far as the story and the music goes, and I knew all the songs. But I don’t think I have a single Queen record in my collection — I was never a fan. But it was an enjoyable way to pass the time and rest my feet for an hour and a half.

Back at home, it was mid-afternoon by the time I had my sandwich. I worked on my web project for a while, and then had a little afternoon nap. I needed milk to make my pasta for supper so I drove down to Albertsons for that. Although I’ve more-or-less sworn off of football, I’m guilty of a bit of backsliding lately. And tonight’s Monday Night Football matchup between the two top teams in the NFL should be interesting. So I had the game on. 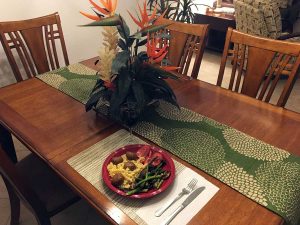 I’m 2 hours ahead of the 7pm start time for Monday Night Football at home, so I was busy making supper during much of the first half and wasn’t really paying attention to the game. I was actually quite busy with supper today — I had a lot of things going on at the same time and it all needed to come together at about the same time. So I was baking some Sicilian meatballs while I was cooking the pasta, and about halfway through that I got a panful of asparagus and mushrooms sizzling on another element on the oven. And timers on my phone and the microwave were ringing and beeping at allotted times to remind me to flip this and add that. And the fan on the microwave was much better at roaring loudly and drowning out the game on TV than it was at redirecting all the steam from my pots and pans. But in the end it all worked out pretty good, and I sat down at my table to another fine “home-cooked” meal.

When I retired to the living room I realized I’d forgotten the channel that the Monica Lewinsky show was on. So I had to click-click-click to find it, and when I did they were playing a repeat of yesterday’s program as a run-up to today’s episode, which was starting at 9pm. I ended up flipping back and forth between that and the football game. The game ended up being everything that the buildup to it had promised and the lead went back and forth right until the end. In the end, the Rams won (I was cheering for the Chiefs — what else is new?) with a final score of about 50 points for each team, a record for MNF. And the game ended at about ten to nine, so I was all set for tonight’s episode of A&E’s series. Which I watched right to the end! I guess that afternoon nap turned out to be just the thing — I had no trouble staying up until the show ended at eleven.

When it was over I washed the dishes and went to bed.