My Sunday Morning talk shows started at 7:00am local time, so I got out of bed before that and made my cup of coffee.  I sort of missed my PVR — and had to flick between channels during commercials just so I could get a taste of what each of the networks had to say. In between I sorted my laundry and did two loads of that. 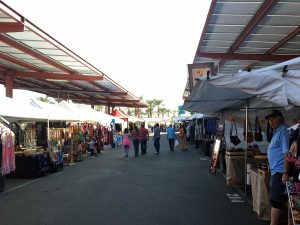 I got on my bike and cycled down to the street fair, just down the road from my place, at College of the Desert parking lot. It reminds me of the Mesa Market in Phoenix. It’s open every Saturday and Sunday and then everything gets packed up so that students can park their cars there during the week. I’d been there before, six years ago when we spent a winter here. I think nothing has changed. The same booths that were set up then are still there. They have live music and a wide variety of gadgets and tools and clothing and ‘art’ and jewellery. It’s open from early morning until 2pm, but today as I was wandering around at noon some of the shops were already starting to pack up their displays. Well, I wasn’t really shopping for anything anyway.

When I got back to my place I was hungry and made myself a sandwich. There were two CFL games on TV today — the second one was a playoff game between Calgary and the Bombers. I worked on one of my crosswords and switched back and forth between football and golf on TV. I wasn’t really following any of the games. I don’t remember who won the first CFL game, and it sure looked like the Bombers would lose in the fourth quarter of the second game (I just checked — and yes, the Bombers lost) when I finally turned off the TV to get ready to go out.

I was invited to Darrel and Cari’s for 5:00. I left home at 4:30 on my bike. Shorts, a sweater, and a light jacket. It was already cooling off and it would be a colder ride home. I made a pitstop at Albertsons to pick up a bottle of wine. I put it in my backpack and cycled on the big wide sidewalks up to their place at Desert Willow. It was almost dark by the time I got there just after 5pm but I was nice and warm from pedalling.

Ken and Brenda are staying at the Penners until this coming Thursday. The five of us sat on the outdoor veranda under the heater and caught up on the day’s adventures. Ken and Darrel are off to play golf at The Palms tomorrow. They had visited the big PGA store today — it’s not far from my place and it sounds like it’s worth a visit. Supper was served — big steak kebobs and potatoes and asparagus. It was excellent. The evening was excellent. It was very kind of Darrel and Cari to invite me over again and I enjoyed meeting Ken and Brenda.

I cycled home a little after 9pm. Like the residential developments in Phoenix, there are very few street lights here, so it’s REALLY dark at night. I felt completely safe riding the empty sidewalks the four miles back to my place, although I had to slow down and almost stop regularly. The sidewalks are zigzaggy and I had to be careful not to ride into a big palm tree whenever I was blinded by the headlights of oncoming traffic. The friendly girl who often monitors the entrance into my country club already knows me and quickly opened the gate for me.

At home I cleaned up the dishes I’d left in the sink. I even played my guitar for a bit. I was going to write my journal but exactly around that time I suddenly got very tired and headed off to bed. I’d leave the writing of this until tomorrow morning.