When we got up this morning the big news was that it was NOT going to rain today. Not here. Cloudy, a bit cooler, but not raining. So it was decided that we would go for a hike. Where to? Silly Mountain? No, we’ve all done that. How about Camelback, in Phoenix? Okay. But when Sue phoned Dave Driedger to find out more about it, she learned that the Driedgers have never hiked Camelback! But Dave recommended Pinnacle Peak, in the northeastern corner of Scottsdale. So we punched that into the van’s GPS and off we were. 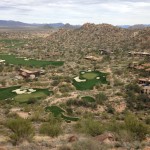 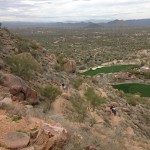 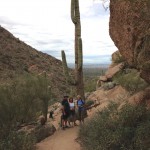 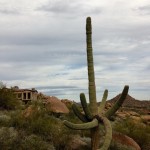 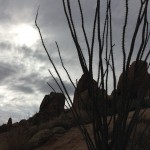 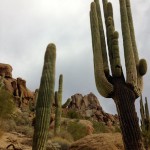 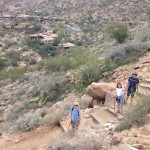 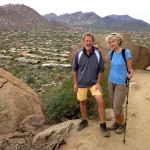 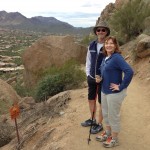 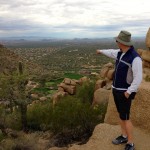 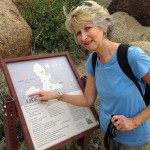 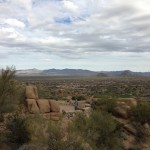 When we got there we found a parking spot in the parking lot — but it was clear we were not the only ones who were hiking this mountain today. We put on our hiking boots and started up. I thought we’d be going up to that ‘pinnacle peak’ — and that looked like quite a serious climb. But no, that peak is for ‘climbers’, not ‘hikers’. The wide well-maintained and marked trail led us AROUND the peak, and then down and around, and then back up again, and then down again! There were signs marking our progress every 100 feet. There were signs pointing out the names and characteristics of the desert plants along the trail.

There were quite a few hikers coming BACK on the trail, and their red complexions and sweaty jerseys said the way ahead would likely be a bit tougher than what we started on. But the scenery was excellent — long highways heading out for as far as we could see across the flat desert, rooftops in the residential sprawl going out in all directions too. And wrapping around the two mountains of our hike was a spectacular golf course. With no golfers. Well, 3 women and their caddies were golfing — and I speculated that they were professional golfers prepping for the tournament later in the week. I bet the course was closed to the public this week. As we hiked our way around we got to look down into the back and front yards of the many luxury homes (estates!) that lined the fairways and greens of the golf course.

When we got to marker 92, which represented the 9200-foot point on the hike, we knew we’d reached the end of the Pinnacle Peak hike and it was time to turn around. All that climbing and huffing and puffing for this? What would my mom think of this! And I knew that all the ‘easy’ downhill sections would now be UPHILL climbs — so the return trip would take exactly as much effort as the trek so far. Oh well, the weather was just right and I was getting hungry.

We got back to the van around 1:00pm and decided that we might look for a hamburger place and then go to the Kierland Commons Shopping Plaza in Scottsdale. As we headed into Scottsdale we spotted a roadside sign that directed us to “Cold Beers & Cheeseburgers” with an arrow pointing left. Whoa! Why look further? We turned into the parking lot, parked the van, and sat down at an outdoor table on the patio of the Cold Beers & Cheeseburgers sports bar. Noticing the size of the burgers that were being served to other guests, Sue announced that she could make FOUR burgers out those half-pound burgers — and that she and I would be SHARING a burger. And so it we did. And I ordered a pretty good beer off the 6-million-brand list the waitress put in front of me to go with it.

After lunch we headed down to the shopping centre. The girls announced that they would meet us back at the van at 4:30 and promptly disappeared into the first clothing store. Ron and I stood and stared at the ‘directory map’ for a while and then tried to find that big Barnes & Noble bookstore. Closed. Now what? Coffee at the Starbucks. Sat in comfy chairs and read the news for the next couple of hours.

We whizzed by most of the rush-hour traffic by staying in the far-left HOV lane, and got home in just over an hour. We watched the U.S. news and sat around for a while. No one was hungry because of the late (big) lunch. Finally at around 7pm Sue started to regret that she hadn’t gone 50/50 on that burger and fries because she was now getting hungry. So we put on our jackets and found the flashlight and headed out to the Hitching Post. Hey, what’s this? Raindrops! Again!

Even at 7pm on a Monday night, that place is ROCKING! We were lucky to get a table! And, as usual, the diners were enthusiastically enjoying the live entertainment. And today it really was ‘live’ entertainment — the young lady with the acoustic guitar was singing ‘Ring of Fire’ WITHOUT a karaoke soundtrack. We ordered two pizzas to go with the drinks. The poor waitress was doing her best to keep everyone happy, and for the most part she was just barely keeping up. We got our pizzas — over-orderd! we took home two half-pizzas for our lunch tomorrow — and at 8pm the singer announced that she’d sung her last song for the night and packed up her guitar. And with that, the diners packed up too. And so did we.

A few more raindrops fell on our way back home. The pizza was put away and I got the TV set up to watch another of my movies, “Selma”. We did our best to stay awake, but finally surrendered at the halfway point and went to bed. After all, it’s ON THE COMPUTER! and we can continue this tomorrow when we’re all able to stay awake.