Soon after breakfast we packed some extra jackets and took a ride in our van out to the Palm Springs Aerial Tramway. The tram takes visitors on a 2.5 mile trip up to Mount San Jacinto State Park. I think we were there just at the right time — the right day and the right time — because we passed quite a few large empty parking lots and parked at the lot right next to the Valley Station. Later, when we left the parking lot, the parking attendants were ushering cars into a couple of parking lots down the hill. So we were at the ticket booth in no time, and boarded the tram about 20 minutes after that. There are 2 tram cars, one going up and the other coming down. The floor of the tram car rotates, so everyone on the ride gets to see all around — up, down, and east and west. The tram starts at 2600 feet and takes you up to 8500 feet during the 10-minute ride. It’s all pretty slick. Once we got to the top we quickly decided on a trail to go hiking on (there are 54 miles of trails to choose from). We took the Desert View Trail, a 1.5 mile loop with incredible views of the Coachella Valley. There were about 5 lookout spots along the way. The forest smelled like pine needles. There was quite a bit of snow up on the mountain too. At first we thought we sure wouldn’t need jackets because we were huffing and puffing so hard from the climb. But after a while we began to notice the cooler temperature and we were glad we’d brought our sweaters. I took quite a few photos. Sue tried to take some photos too, but had some problems with our little old Canon camera. She’d get herself into ‘photo-shooting’ position and squint through the little eye-piece and then press the button — and the lens would retract and the camera would shut itself off. Was it the batteries? No, we just put new batteries into it. Was it taking her too long to set up the shot? Yes, but that wasn’t causing the problem either. After a bit of experimenting she noticed that the problem only happened when she was taking a ‘portrait’ orientation photo, but the camera worked fine in landscape mode. Finally, after standing and smiling for quite a few shots but getting no pictures I watched to see if I could spot the problem. If the same issue ever happens to you, maybe reading this will help you discover the solution. Whenever Sue turned the camera on end to take a portrait photo she was pressing the ON/OFF button in the middle of the top of the camera, instead of the ‘Photo’ button which is on the top right side of the camera. Sue was a bit surprised to (finally) learn that when you turn the camera on its side the buttons just rotate with the camera — so when you want to snap a photo you still have to press the ‘photo’ button, not the ON/OFF. So here are some of our Mt Jacinto photos: 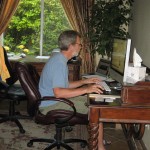 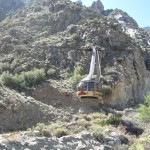 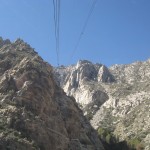 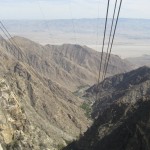 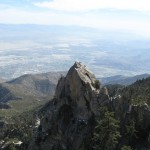 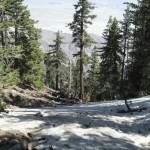 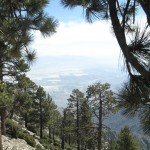 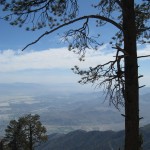 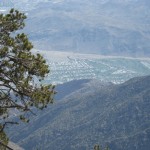 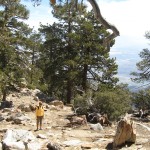 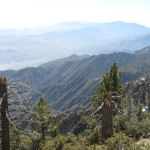 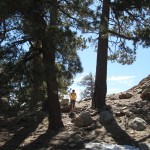 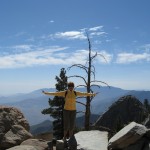 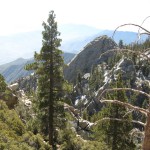 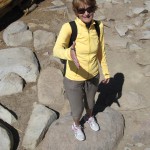 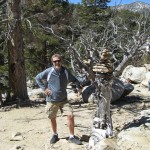 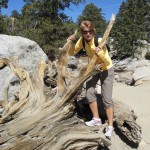 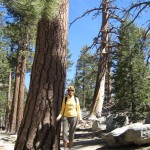 Sue had quickly made some sandwiches to take with us. After an hour and a half of hiking we sat down and ate our lunch. Soon after lunch we were on the ‘down’ tram. We got home shortly after 1. Sue went outside and read and I sat down at my computer and did some more work. We had an early supper and then watched our DVD rental from yesterday, “Smashed”. It was pretty good — the story of an alcoholic wife and teacher. We took a little moonlight (full moon soon) stroll after the movie and returned the rental to the Vons across the road. Sue watched some TV while I finished up one of my web projects. Ice cream for snack, and then off to bed a little after midnight.