I made a 3-egg omelet with cheese and bacon for my Saturday breakfast. I listened to Van Morrison all day while I worked on my computer.

By mid-afternoon it was time to take a break. I went out for a walk. I ended up at The River mall. Lots of people out — it is the Thanksgiving long weekend and a that has brought a lot of visitors to town. I think a lot of families come to be with their parents and grandparents who have retired to the Palm Springs area. So the restaurants are booked, the golf courses are busy, the streets are filled with shoppers. I went to the theatre, hoping to see the new movie “Green Book” but it was sold out! And the evening showtimes were all sold out except for the front row. What about “Boy Erased”? All sold out, too. Oh, are you a single? In that case we have one seat for the next showing. I took it. I’d seen the previews for the movie all week, and although I more-or-less knew the story from watching the previews, I very much enjoyed the film.

It was dark when I left the theatre. I wandered around the outdoor mall, watching people and listening to a couple of buskers. The Ben and Jerry’s was doing a brisk business. By now my big omelet was but a distant memory and I was hungry — but not just for a little cup of fancy ice cream. I walked back home, going through the Rancho Las Palmas Country Club. Like most retirement communities in the sun belt, there are very few street lights in this development. But tonight there was plenty of light to show me the way through. The golf course that criss-crosses the one-mile road through the private club was lit up by a giant full moon that was rising ahead of me. Stunning. I actually turned off the flash on my phone and tried to take a few photos — none of which come close to what it actually looked and felt like. 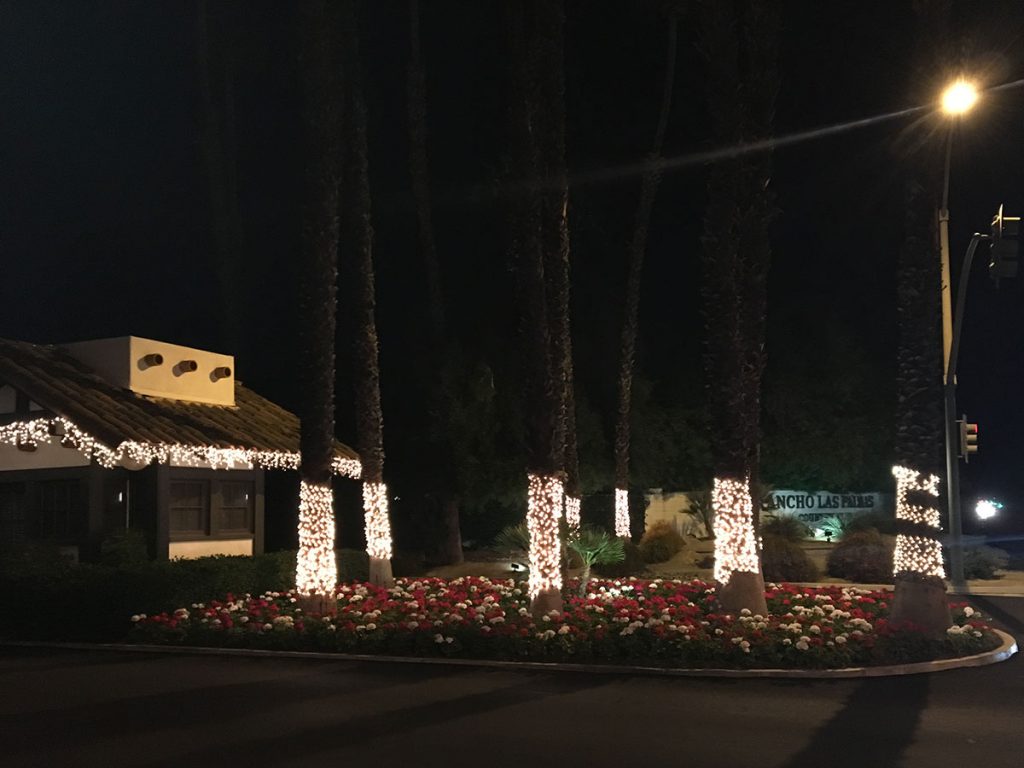 Festive gates at the country club. 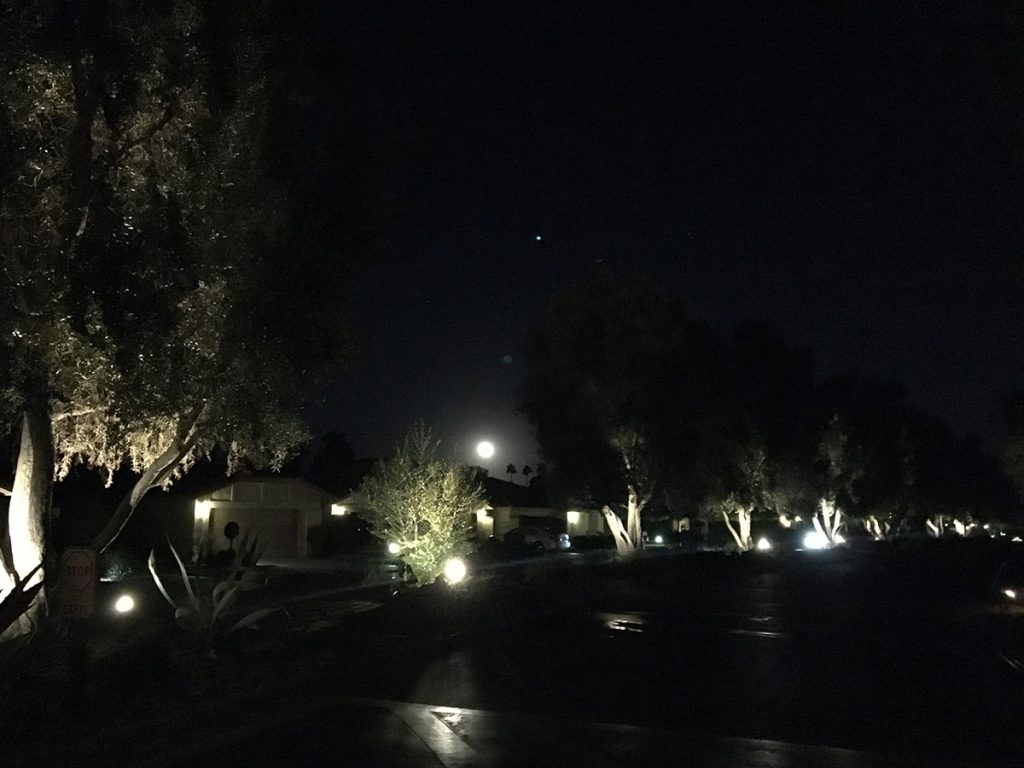 I see a FULL moon a-rising 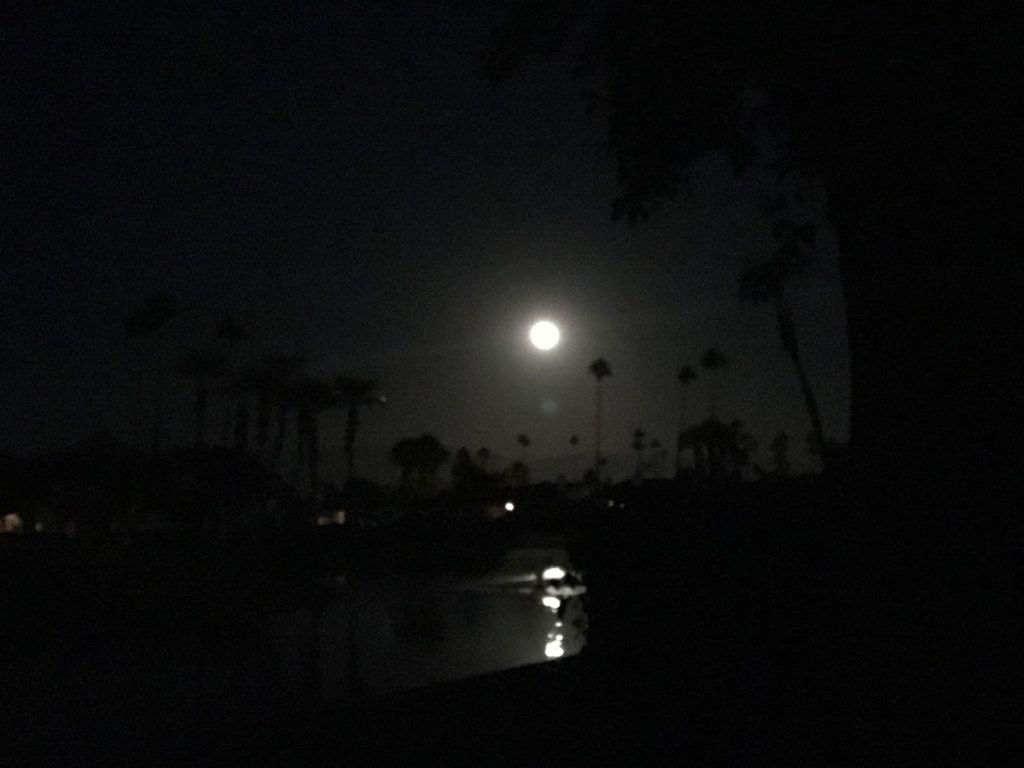 Bethlehem in the country club

The gates into my country club are now fully decked out in Christmas decorations and lights. The friendly girl at the main gate knows me by now. It’s not quite another mile from the entrance to my house. A lovely walk. The moon was now shining down on the palm trees around the pond on my golf course. It reminded me of the chalk talks that Henry Fehr used to do in church around this time of year — Bethlehem, with exotic black silhouettes of palm trees and a moon shining overhead. If only they had the Northern Lights here — that would be almost like the black light effects that were the grand finale of the chalk talks.

When I got home I opened another of my boxes of ‘easy-to-make’ pasta. I whipped up quite the impressive meal and ate both of the 2 portions of pasta that the box claimed were in there. After dinner I plunked myself down back in front of the TV and watched a series about the 1974 Patty Hearst case on CNN. Here I am again, living in the past! I know how this thing ends — I actually followed this story when it was happening. Hey, for as much as I ridicule the old folks around me, I’m probably exactly where I belong!