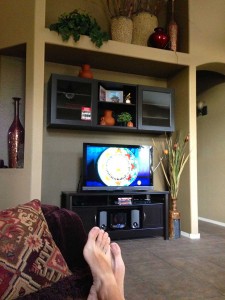 Crepes with fruit and great coffee for breakfast. Skyped with Alex and Max. Watched ‘our shows’ in the morning — CBS Sunday Morning and Fareed. In fact, I had to try to see over the top of those feet ALL DAY! Because we’re in Mountain Time Zone, Sunday afternoon NFL starts BEFORE NOON. And, as is becoming more and more the custom, pretty much ALL my teams lost again. If learning how to handle losing builds character I’ve got character to spare. The Lions got destroyed by the Patriots. Then (my ‘new’ adopted favorite team) the Arizona Cardinals lost to the Seahawks. And in between those games I checked the Winnipeg Jets hockey game during commercials — the Jets were winning 2-1 when I first flicked that way, but quickly fell behind as soon as they realized I was watching and ultimately lost another one. If I had had any interest at all in the CFL I could easily have influenced the Eastern and Western Finals — but I don’t even follow that league enough to know whom to ‘hex’. Sue called up Val and the two of them spent the afternoon ‘reading’ (not a page — too much to ‘discuss’) at the pool. 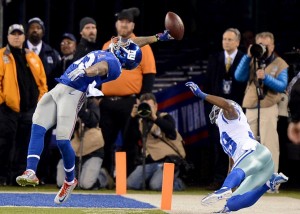 After supper (leftovers) Sue joined me in the living room to watch Sunday Night Football. Cowboys at New York. Even though the Giants are more-or-less out of it, you gotta have hope. And what do you know — Manning and the offence was having a great game! In fact, Giants rookie wide receiver Odell Beckham Jr. made a ridiculous catch which put the Giants up 14-3 in the second quarter. Unfortunately the Giants’ defence couldn’t stop Dallas from ultimately winning the game 31-28.