How sweet are your words to my taste, sweeter than [chocolate] to my mouth! Psalm 119:103 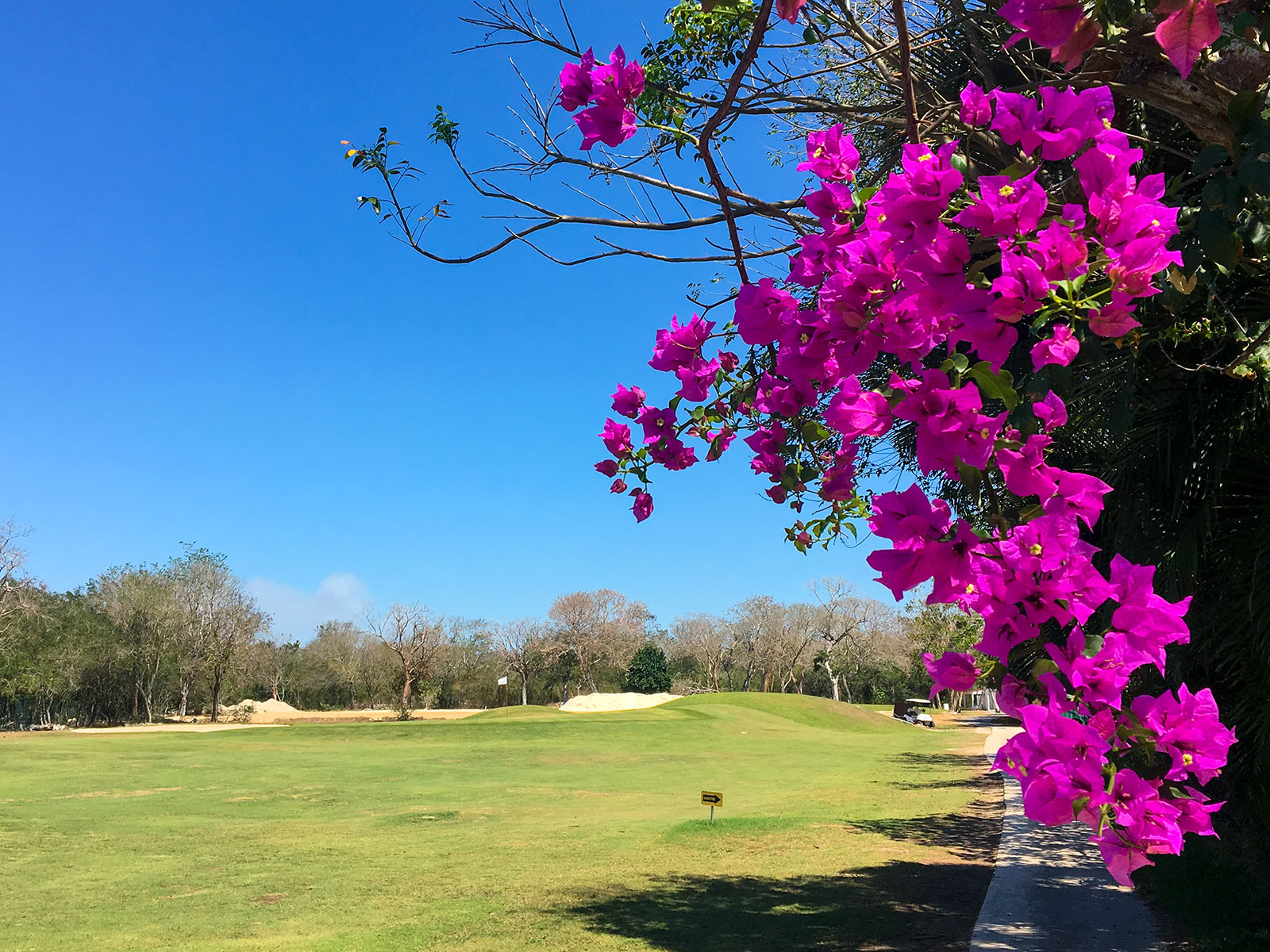 After breakfast the three of us made our way to the La Ceiba Golf Course. I went to get the pull carts while Dave registered us with the starter. By now we know the routine. And as tricky as that first dogleg right used to be when we first arrived a couple of months ago, somehow we now manage to play on the fairway without any trouble at all. Now if only I could say the same about my putting…

Once again we got stalled behind some VERY slow golfers on the fifth hole. It might have been that we ‘sort of’ hit up on them after watching them fart around on the green for about 10 minutes, but when we pulled our carts up to the tee on the sixth, the ladies graciously waved us through! And it was clear sailing after that.

MaryLou left us after the first nine. Dave and I continued. Once again, a couple of women in the carts ahead of us seemed to be more interested in visiting than in playing golf. And again, after watching and waiting and watching and waiting, we managed to scare them off the green and they let us pass.

After the round I took a walk to the mini-super to pick up some fresh bread for our sandwiches. I showered and then lazed around for the afternoon. Dave was doing a crossword and watching the Jack Ryan series on Amazon Prime. I watched a bit too, although I may have napped more than watched. In fact, with all that ‘doing nothing’, we almost missed happy hour! We had to more-or-less guzzle our caesars and run to the front gate to catch our Uber so we wouldn’t be late for our six o’clock booking at the Fela Chocolate Shop. 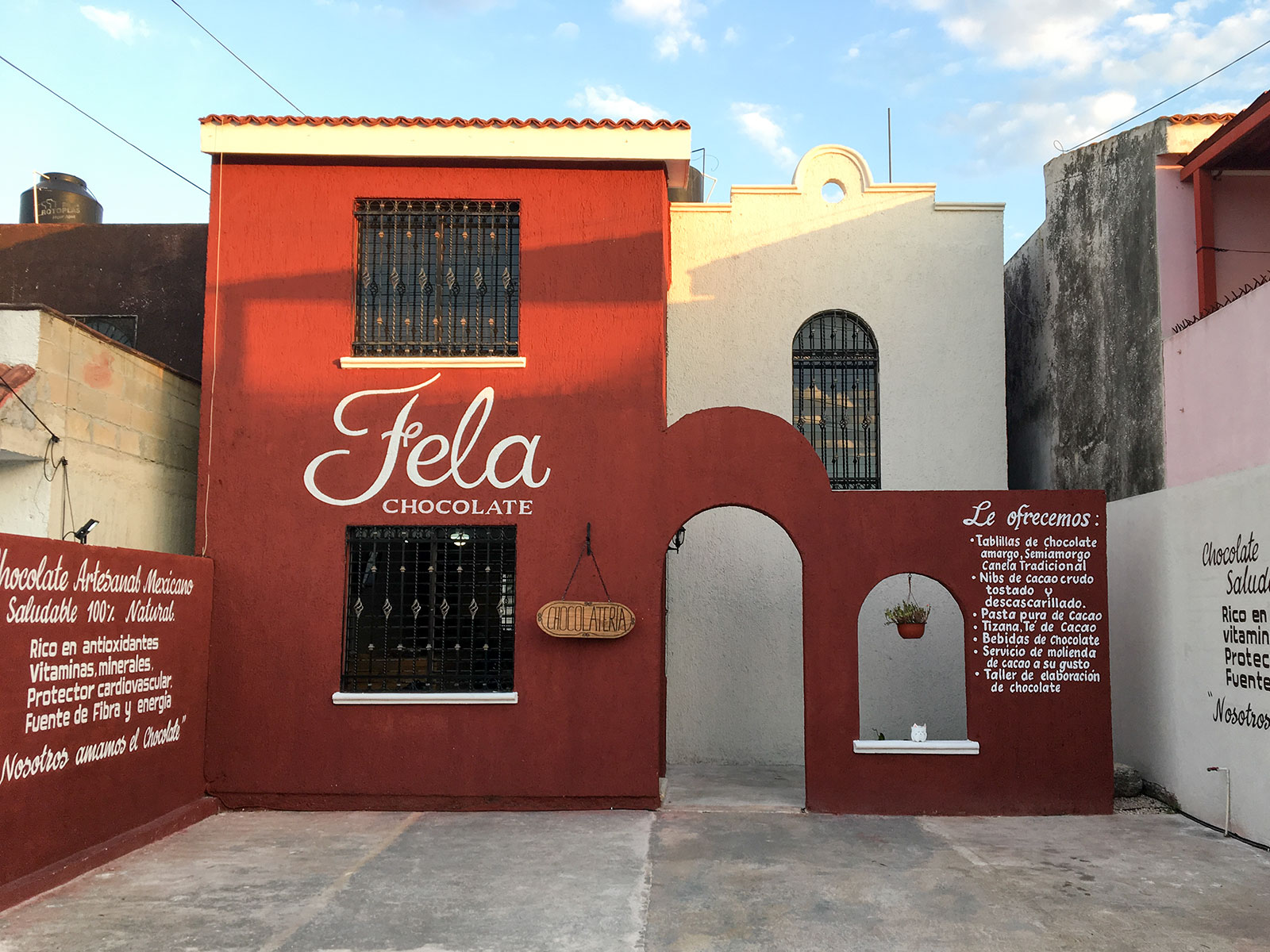 MaryLou had booked a visit to a local chocolatier to learn about the history and traditions of chocolate in Mexico. This wasn’t really a ‘tour’ — it was an ‘experience’. We would learn by DOING.

We were welcomed into the little shop by Beatrice, a ‘grandmother’ who explained that she and her husband were the third generation of chocolatiers in the Fela family. She introduced us to her husband, and to her soon-to-be daughter-in-law, who served us small sugar-coated cocoa beans while we waited for the translator to arrive. Although she was expecting one more participant, our ‘lesson’ began promptly at six o’clock when Beatrice and the translator took us to a small upstairs room where place settings had been set up for us. Beatrice used posters on the wall and a book with photos to ‘teach’ us about the cocoa plant and the production of chocolate. She would point and explain, then wait for the translator to repeat what she’d said in English. About 15 minutes into the talk, Chris, a young man from Cincinnati joined us. By now we were all taking turns DOING stuff. 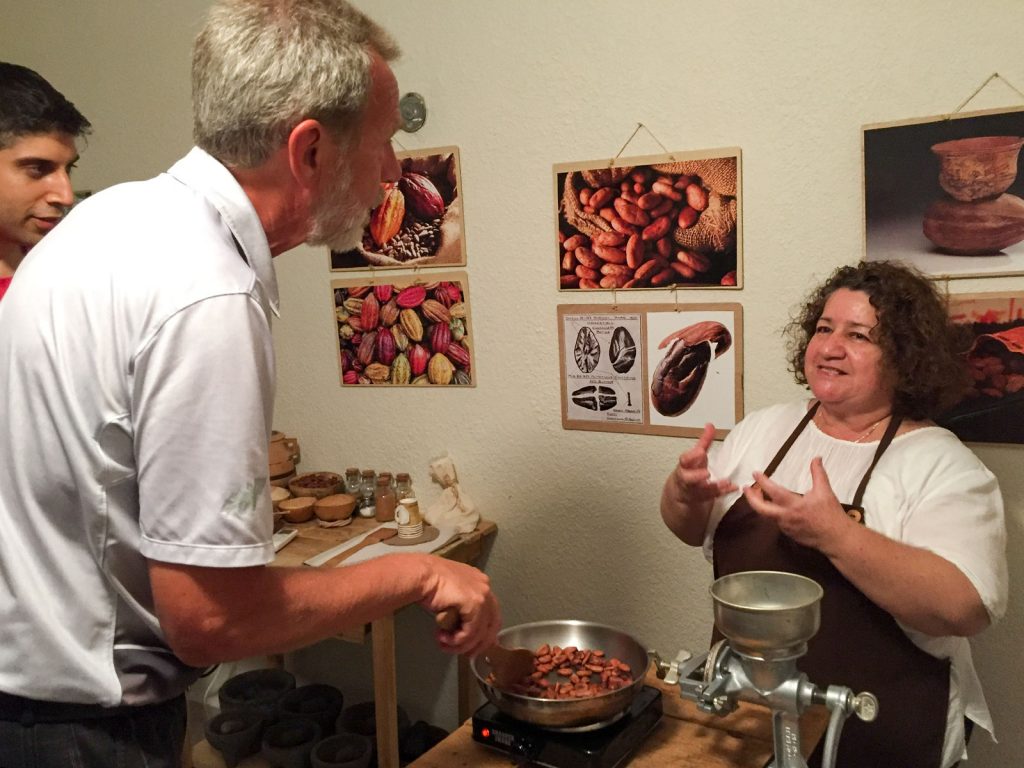 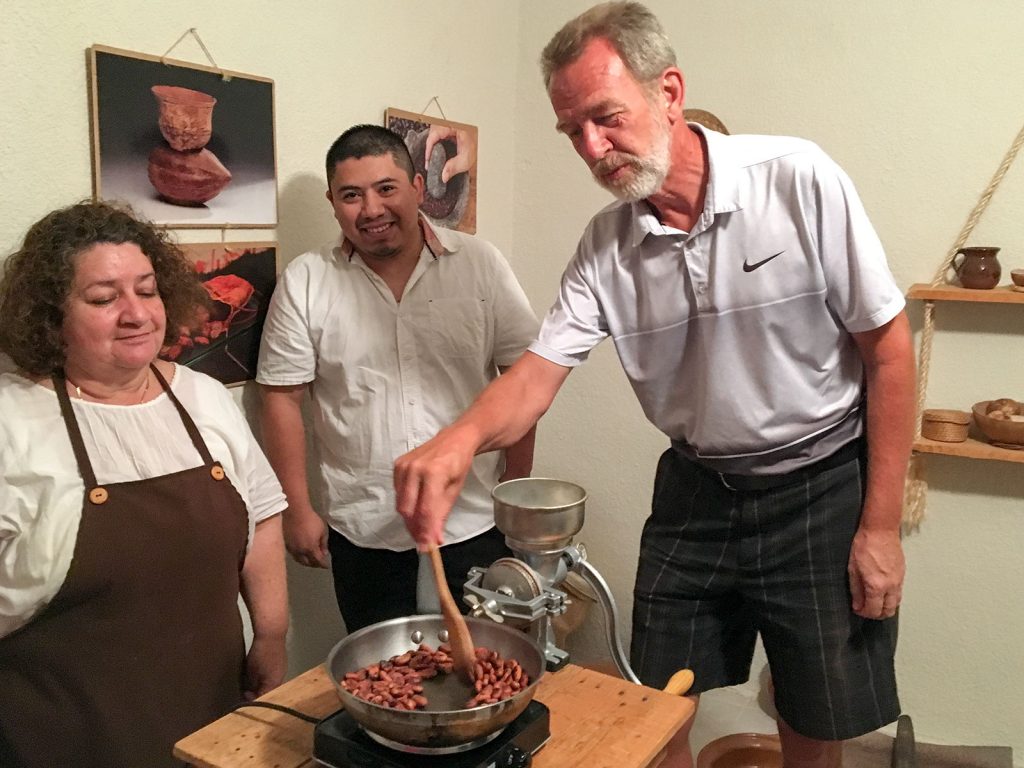 First we stirred the chocolate beans as Beatrice roasted them in a pan. Soon the room was filled with the sweet aroma of chocolate. Then we each got a handful of roasted beans and began peeling them. The lovely daughter-in-law brought us some delicious cocoa tea and a chocolate croissant to fortify us for the work ahead. 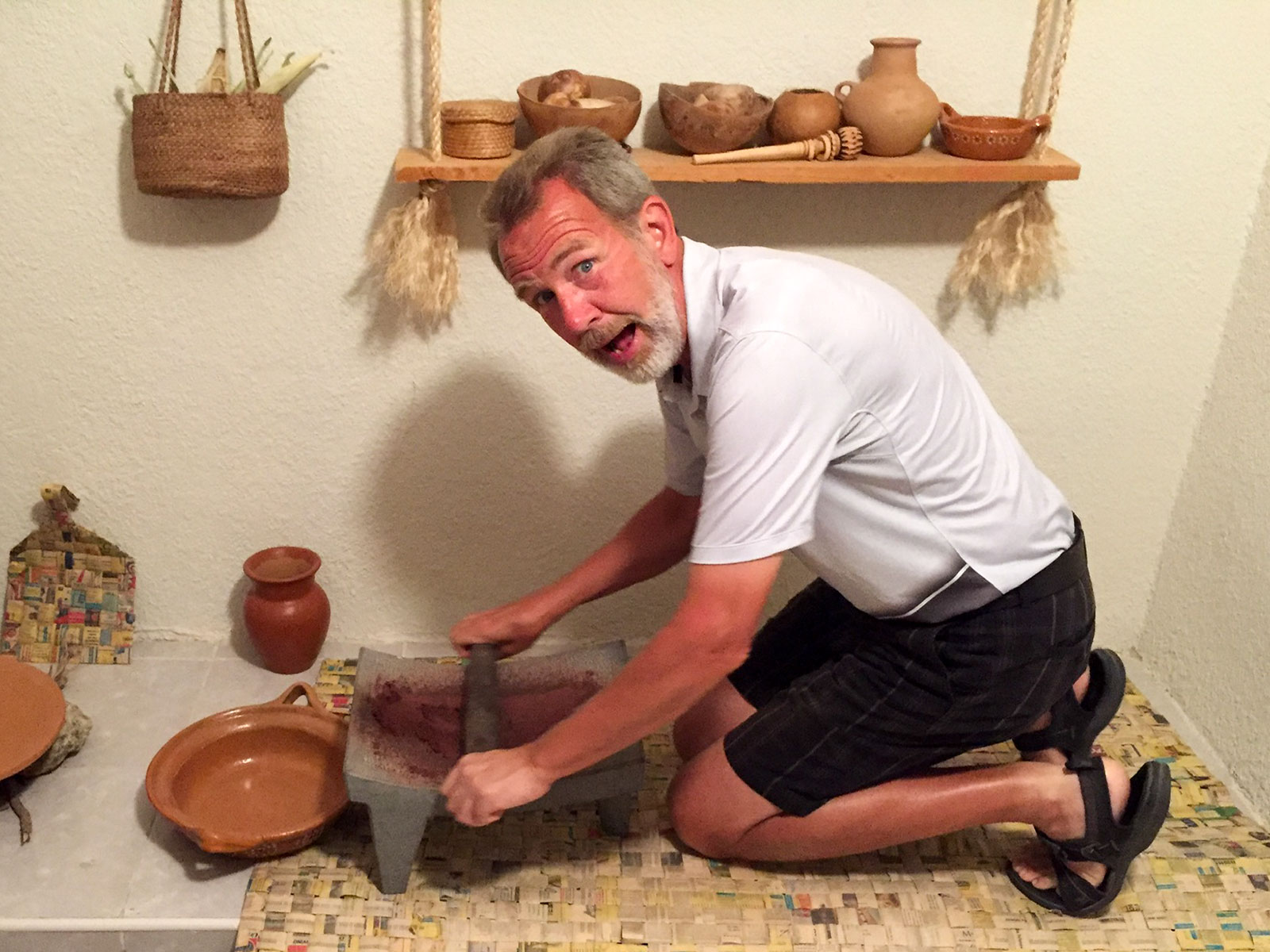 Then we took turns crushing the beans with an ancient ‘rolling pin’, resulting in a kind of chocolate paste. We made that paste even finer with a mortar and pestle. 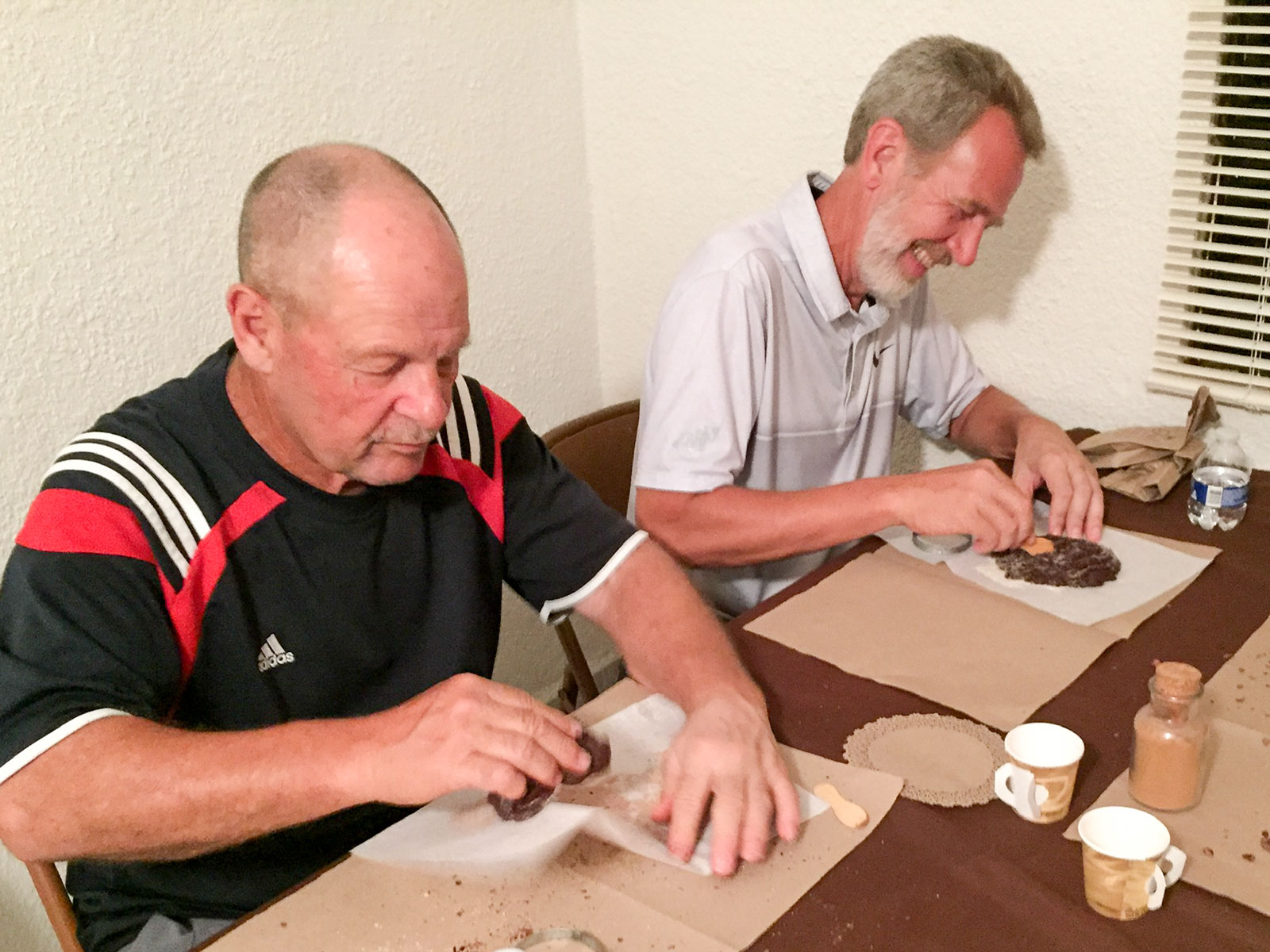 Then added flavours to the bitter dark chocolate mixture: unrefined sugar, cinnamon, almonds, chiles, and more. We kneaded the chocolate ‘dough’ with our hands, mixing in the extra ingredients, stopping to sample the mixture and adding more sugar according to our tastes. Then we used a metal ring to shape the dough into three or four round ‘cookies’. We wrapped each cookie in a small square of wax paper. The cookies were soft and shining with cocoa oil, but Beatrice explained that in about an hour the chocolate would become hard just like a chocolate bar.

And that was the ‘tour’! We took our little bags of roasted beans and chocolate ‘cookies’ downstairs. While we waited for our Uber to come pick us up, the Fela family and their translator visited with us. MaryLou bought some nicely wrapped chocolates from the display. We all posed with Beatrice for a ‘family photo’ and got a big hug from her as we said good-bye. We had had a most interesting evening. I was so glad MaryLou had arranged and booked this for us. It was a lovely intimate ‘authentic’ experience.

The Bella Roma restaurant was not far from the Fela house, although our Uber driver had a bit of trouble finding it. We’d been to this restaurant with Ken and Kaaren a number of weeks ago and although they didn’t serve pizza, we decided to make a return visit. We sat outside on the large patio and enjoyed the warm night air under the stars. The owner of the restaurant introduced himself and explained the menu options to us. Dinner was good; pasta and shrimp for me, lasagna for the Driedgers. We opted for a little shot of liqueur instead of tiramisu for dessert. Then we Ubered home.

And that’s what we did this Friday.