After breakfast we all piled into the van and off we went to downtown Phoenix. Noreen had made a list of places to visit here in Arizona and a strip known as ‘Roosevelt Row’ was on the list. It was not quite an hour drive from GC. 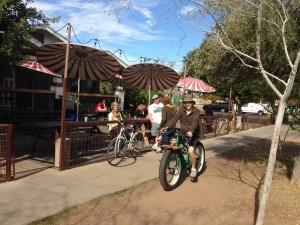 When we got there it appeared that we’d arrived a bit too early — by about 12 hours! Most of the shops and galleries were still closed. We walked around the block a few times and finally sat down at a coffee shop to decide what to do next. A couple whose bikes were parked near our outdoor table came by and explained that most people in this neighbourhood kept “vampire hours”, so although things seemed quiet now, wait until tonight and the streets would come alive. So, while Ron took the guy’s ‘fat tire’ bike for a spin, the woman told us about a great Mexican restaurant a few blocks away. And that’s where we went for lunch.

We drove back to the house. The Janzens went for a bike ride and I went to the driving range. After happy hour the Janzens took the van and went out for supper. Sue and I walked across the road to the Hitching Post. Man, that place was packed! And loud! We were lucky to get a table and yelled our pizza order to our waitress.

The so-called live entertainment tonight featured a singer with a guitar and a girl who clapped along to the recorded karaoke track. Wow! Another amazing band! Brass section and backup choirs and drums and percussion– but only one guy with an acoustic guitar and a girl clapping along! No matter. The crowd of boisterous old-timers, most of whom were most of the way through their bucket of beers, encouraged ‘the band’ enthusiastically. It did not take us an hour to finish our ‘cowboy’ pizza.

Back at home we watched The Fifth Estate and the news. The Janzens came home and showed off their purchases from the shoe store. Ice cream for night snack. In bed by eleven.