Thirty-five years ago yesterday the Winnipeg Jets lost the third and final game in the playoffs to the Edmonton Oilers. The Oilers went on to play and ultimately lose to the New York Islanders in the 1983 Stanley Cup. It was a sad moment for me. I was watching the game at home on a Saturday night, along with most of the staff of Able Sound who were ‘celebrating’ with me the completion of my newly-finished basement. While I was partying in my new basement, Sue was having a baby at the St Boniface Hospital. Our sister-in-law Shirley, a nurse, was with her. She called me shortly before midnight and encouraged me to get my butt over to the hospital — our baby girl was about to be born. I took my leave from my “basement-warming party” and hurried to St Boniface. It was early Sunday morning, April 10. By the time I got there the big event had already happened. I remember my first meeting with that “wet pink little gopher” and wondering how that little creature would change my life. I had a short visit with Sue. She was tired but doing fine. She told me she would like to name our baby Alexandra. I was okay with that — I really had no opinion about it and was inclined to accept it partly because I felt some guilt for not having been there for Sue. It was around 2:00am when I got back home; there was a big lit sign on the front lawn shouting “It’s a GIRL!” Betty Anne Funk was in the kitchen making pizzas for the crew. The party was going strong.

Happy Birthday, Alex. I love you more than I could ever have imagined 35 years ago!

We now take you back to regularly scheduled program already in progress.

Yesterday’s poem did not mention the kerfuffle I had getting back home yesterday. There is an entry gate into the subdivision where I’m hanging out that requires an access code. I can either punch that code into a keypad at the gate or use the fob that I keep in the van. Last night, hurrying home to enjoy the piping hot fried chicken I’d bought at Bashas’, the fob didn’t open the gate. Neither did the code I entered into the keypad. What now? It was dark outside and I was a bit hesitant to jump over the fence what with all the rattlesnake roadkill I’d seen the last few days. I waited for another resident to come driving up and open it up for me but that seemed unlikely given how early everyone here ends their day. I thought of parking the van on the road outside the ‘compound’, but I was hoping that if I ‘jumped’ up and down on the exit driveway I could trigger the exit gate to open. Luckily another car drove up and opened the entry gate and I quickly jumped into my van and followed it in.

All that to say that this morning when I went back to try my code and my fob another resident who was driving through the gate informed me that the ‘admin’ had deleted ‘old’ codes and I would need to email that admin person and send him photos of my fobs so I could get a new code. Hmm… not likely that I’m going to do that. So I went to the rental agent. She knew nothing about the change. Ultimately she gave me three alternate codes that she got from three other properties in the subdivision. I cycled back to the gate and tried them — two of them worked. So I’m back in business.

I went for another long bike ride this morning. I stopped at Bashas’ for a cherry turnover and a Starbucks coffee. When I got back to the house the load of laundry I’d thrown in before I left was done. I made the bed in the big room so it would be ready for Dave when he arrives tomorrow and moved all my stuff back into the ‘second-best’ room.

By three o’clock I had cleaned up the house and myself and was ready for another try at a golf game at Mountain Brook. The temperature today (and forecasted for tomorrow) is 98 degrees. That’s around 37 degrees Canadian. That is hot. But, as we like to say, it is a DRY heat. So the number scared off most golfers, but idiots like me see this as an ‘opportunity’!

I teed off and by the 4th hole I’d once again caught up with slower groups ahead. I jumped from hole 4 to hole 7. Now I was in the clear. After the 9th I went back to one and played the front 9 again. Yikes! I don’t know what’s going on, but it seems I’ve caught a ‘rhythm’ — my drives are all straight and far, and I can ‘see’ my putts sinking from 15 feet out. Look out, Jordan Spieth. I’m coming… 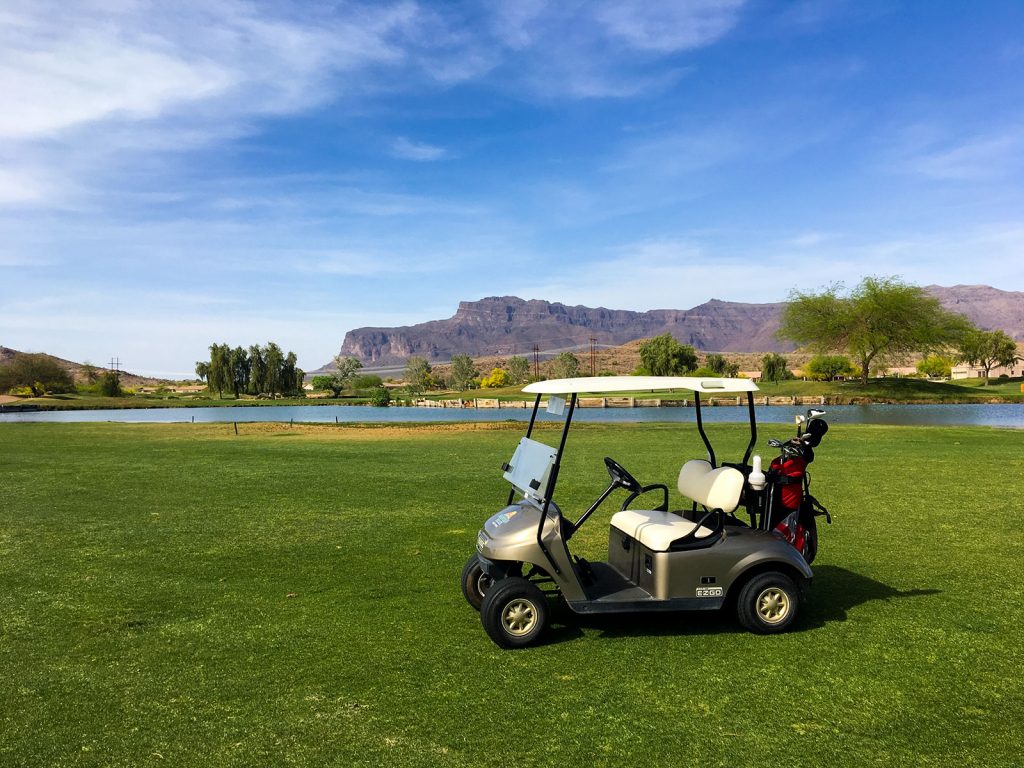 The same view of Superstition Mountain as the above photo. 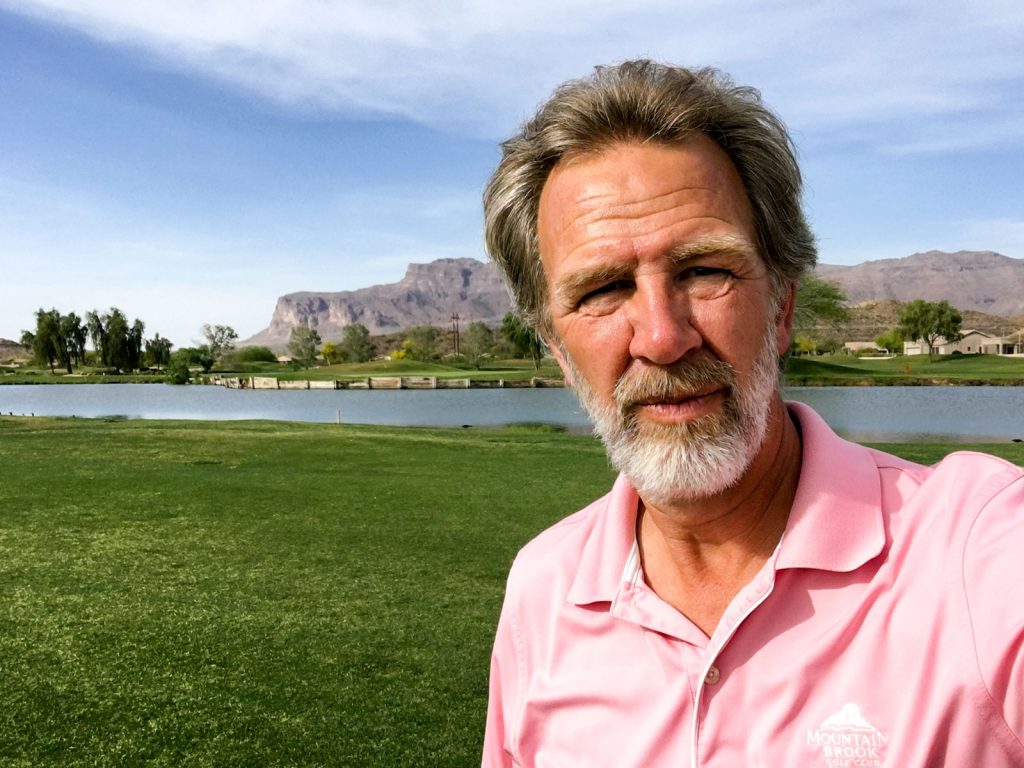 Look out for this guy — his game is improving daily!

I got a message from Max and Alex — they would like to Facetime. Well, I’m 2 hours ahead of home and Max goes to bed at 8:30. That means I gotta be home by 6 my time. So I quit at 5:30 and drove home. Facetimed with the birthday girl and her ‘boys’. Things are great at home. Max was all excited about some very sparkly new nail polish he had picked out for Alex’s birthday gift.

I fired up the barbecue and made myself a couple of delicious hotdogs for supper. Man, after not eating hotdogs more than once a year for the last 40, I’m doing my share of ‘catching up’ now!

After supper I spent a bit of time looking up Dave’s flight for tomorrow — wanna make sure I’m there at Phoenix Sky Harbour at the right time. Then I sat back and watched some of the Elton John special on TV — although at 9:00pm I switched to Frontline on PBS — more ‘Trumpy’ news.